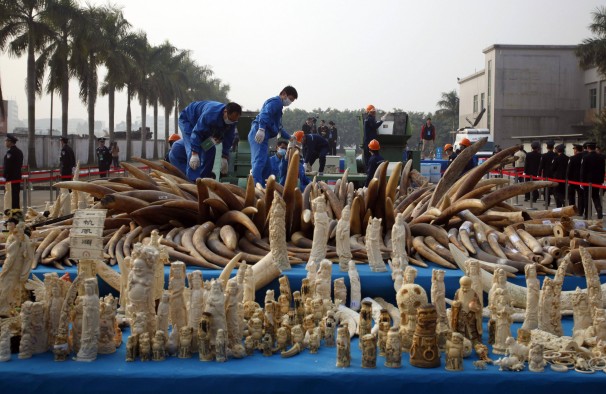 The Washington Post’s Simon Denyer reports on the destruction of more than six tons of confiscated elephant tusks and carved ivory on Monday, “an event that signaled [China] would do more to join global efforts to protect African elephants from rampant poaching.”

On Monday, workers in overalls fed scores of weighty tusks and hundreds of small, intricately carved objects into a large, noisy green crushing machine in front of a crowd of officials, diplomats, conservationists and journalists in this small town just outside the southern city of Guangzhou.

[…] The Chinese ivory-crushing event appeared to have been hastily scheduled ahead of a similar event in France and a global summit on the subject next month in London. Fifty heads of state have been invited to the summit, which will have British Prime Minister David Cameron as host and Britain’s Prince Charles in attendance. Conservationists called it a significant step.

“It sends a very strong signal to the world, but most importantly to the Chinese people, about the commitment of the Chinese government to be part of the solution to this global problem,” Bryan Arroyo, assistant director of international affairs in the U.S. Fish and Wildlife Service, said before the crushing. “China is at a pivotal point that could make a huge difference.” [Source]

The measure has been praised by many conservation groups. John Scanlon, secretary general of the Convention on International Trade in Endangered Species, said at the event that it sent “an unequivocal message – both domestically and internationally,” which was “strongly reinforced by the increased numbers of seizures, prosecutions and convictions in China.”

But the ivory destroyed constituted only a small portion of China’s total stockpile, estimated at “well over 45 tons”: the remainder reportedly could not be crushed as it remains tied up in legal proceedings. Moreover, China’s legal ivory trade continues to provide cover for the black market, while the effects of the destruction on prices, and therefore poaching, may be unpredictable. The BBC’s Matt McGrath quoted Traffic’s Tom Milliken:

“The legal source of ivory remains in the hands of the Chinese Arts and Crafts Association. Although they purchased it for less than $150 a kg, they have been selling it at highly inflated prices in China.

“I think what we are seeing is that the black market price undercuts that legally controlled system and that has produced a very perverse incentive for manufacturers to source cheaper illegal ivory in other places.”

There are also worries that simply destroying stocks of ivory only encourages poachers to believe that scarcity will drive up prices, thereby giving a greater incentive to kill elephants.

“If we don’t understand the role of speculators in the trade, the destruction could be counter productive in the long run,” said Tom Milliken. [Source]

At The Guardian, however, the Wildlife Conservation Society’s Joe Walston argued that even as a half measure, China’s ivory crush should be welcomed:

The importance of the crush is not its direct impact on the market price of ivory (zero) or the safety of wild elephants in Africa tomorrow (negligible); its importance lies in it being the manifestation of a very real debate within the Chinese government on this issue.

[…] The biggest fear is that crush contrarians within the Chinese government will use international criticism to prove their point: that China will just continue to be vilified whatever it does and it should therefore disregard the global movement against ivory. Similarly, government proponents of further, more influential actions against the ivory trade don’t necessarily need our support, but they would like us not to be opponents to their cause. Hence, the move needs to be welcomed if only to embolden those within the Chinese government who are pushing for more substantive action on this issue. [Source]

South China Morning Post has published a dense infographic on the global ivory trade, which also highlights other animals under pressure from illegal trafficking in Asia. On Monday, the Post’s Amrit Dhillon reported voices from India calling for Chinese action to stem the tiger trade. With fewer than 4,000 wild tigers left, their numbers are less than 1% of the African elephant’s.

“Until the demand is addressed and stopped, tigers will go on being killed by poachers. But this issue of demand is something that can only be tackled by China,” said Belinda Wright, head of the Wildlife Protection Society of India.

According to the government-run National Tiger Conservation Authority, 63 wild tigers died last year, some to accidents, illness or old age, but 48 to organised poaching gangs who sell the body parts to China where they are used in traditional medicine.

[…] “The prices the poachers are fetching are so high that, despite India’s attempts to enforce the law, they are prepared to take risks. They are ruthless and sophisticated. We have to reduce demand,” said Tito Joseph, the Society’s programme manager. [Source]