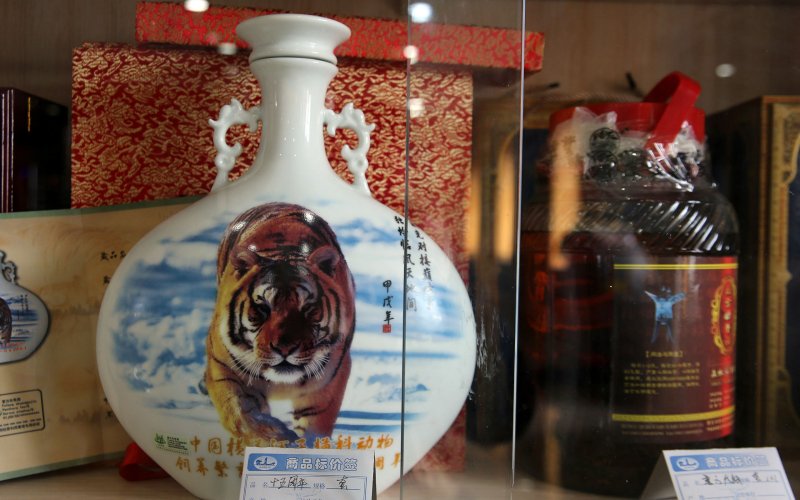 After a Chinese delegate admitted that Beijing allows a trade in skins from captive tigers at a CITES meeting in Geneva last week—saying “we don’t ban trade in tiger skins but we do ban trade in tiger bones,”—a report from the Daily Beast looks at China’s black market for medicinal tiger bone tincture and the loophole that allows it to thrive:

Li has a small collection of tiger bone wine. His hobby of buying and selling the stuff led him to experiment with tincturing. His recipe for the spirit is simple: add a tiger bone to rice wine, steep for 50 days. The traditional process is much more complex: tiger bones were also brewed with a multitude of other ingredients like antelope horn, red sage, and dried ginger.

Tigers have it rough in China. In 1959, as part of the Great Leap Forward, Mao Zedong waged a public campaign in an attempt to eradicate the South China Tiger, as he considered the species “an enemy of man.” […] The official ban on tiger bone sales has been in place since 1993—but why does the Chinese government see a difference between killing endangered animals for their skins and killing them for their bones?

Last year, the UK-based Environmental Investigation Agency (EIA) took a closer look at the tiger trade in China. EIA found that some companies are issued licenses to breed endangered animals, including the South China Tiger. A notification issued to those businesses by the Chinese government in 2005 enabled “the pilot use of captive-bred tiger bone for medicine.” In fact, traditional Chinese medicine outlines the uses for each component of a tiger, down to its nose leather and whiskers.

The 2005 notification reenergized the tiger bone wine industry, and the drink was revived as an indulgence for the elite, marketed by distributors directly to top-dollar clients and rarely stocked in stores. Those who have invested in tiger bone wine production justify what they do by citing a loophole: They’re not actually selling tiger bones. […] [Source]

Loose regulation on China’s black market for tiger parts has been noted to fuel illegal poaching in India. Read more about moves to protect endangered species and continued demand for their products in China, via CDT.