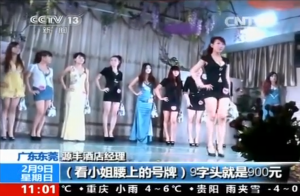 After CCTV’s recent exposé on prostitution in Dongguan, a city long notorious for its thriving sex trade, 67 (of the city’s estimated 300,000) prostitutes were arrested, and 12 entertainment venues shut down. Just as many netizen’s saw their weibo criticism of CCTV and whoremongering officials disappear from Sina Weibo in the aftermath of the crackdown, a post from @阅读报 lamenting the lost desire to visit China’s “Sin City” was likewise censored, as was a parable posted by @司令本:

@司令本：CCTV interviewed an off-duty migrant worker on his thoughts about the station’s anti-prostitution campaign in Dongguan. The migrant took a drag off his cigarette and tearfully replied: “I’ve never been to the Three Gorges and they’re already flooded, all my life I’ll regret it! I’ve never been to Shangri-la, and now the place has burned down, it’s too late for regrets! And, just as I was preparing to go to Dongguan, who knew? The moral is, there are times in life when speaking of a journey just isn’t enough.”

@avb001: As Dongguan police launched their assault on the johns yesterday, one man suddenly roared, Ma Jingtao-style, into the lens of the CCTV camera, “Fuck! At the World Cup, it was all you! At the Summer and Winter Olympics, you! The undercover Dongguan investigation, you again! I’m ____ journalist here to investigate! Won’t you just let local TV have enough to survive?!” “Yeah, we’re not finished with you yet!” a group of johns stood up and said, “we’re all here from the local TV station.”

@tatamama: You can’t move a tiger, and you can’t catch a fly. Finally though, it looks like you can stir up a henhouse.

Henhouse is a play on the use of the word “chicken” (鸡) as slang for “prostitute” in Chinese.

@赵晓: Virtue lies not only below the belt, but also above; not simply in the ethics of the individual, but more so in those of the public; not only in tangible behavior, but also in the formless spirit. China’s most immoral aren’t the prostitutes, but rather the officials; it’s not the personal ethics that are foul, but the public ethics; the problem isn’t that bath houses are everywhere, but that righteousness is nowhere; it’s not that there are too many prostitutes, but that there is no rule of law; it’s not that behavior is repulsive, but that spirit is lost. Only when we rescue and redeem our spirit and establish a firm rule of law will we have great virtue!

@Vihike：【新技能get√】Famous friend of women @陆琪 [Lu Qi] says that only those who haven’t been to Dongguan are good men. But @流行东莞 [Popular Dongguan] says the best way to check a woman’s IQ is is to see if she’s following Lu Qi.

Lu Qi  is the author of 婚姻是女人一辈子的事 (“The Life of Women is All About Marriage”) [zh], a self-help book on marriage aimed at China’s female population.