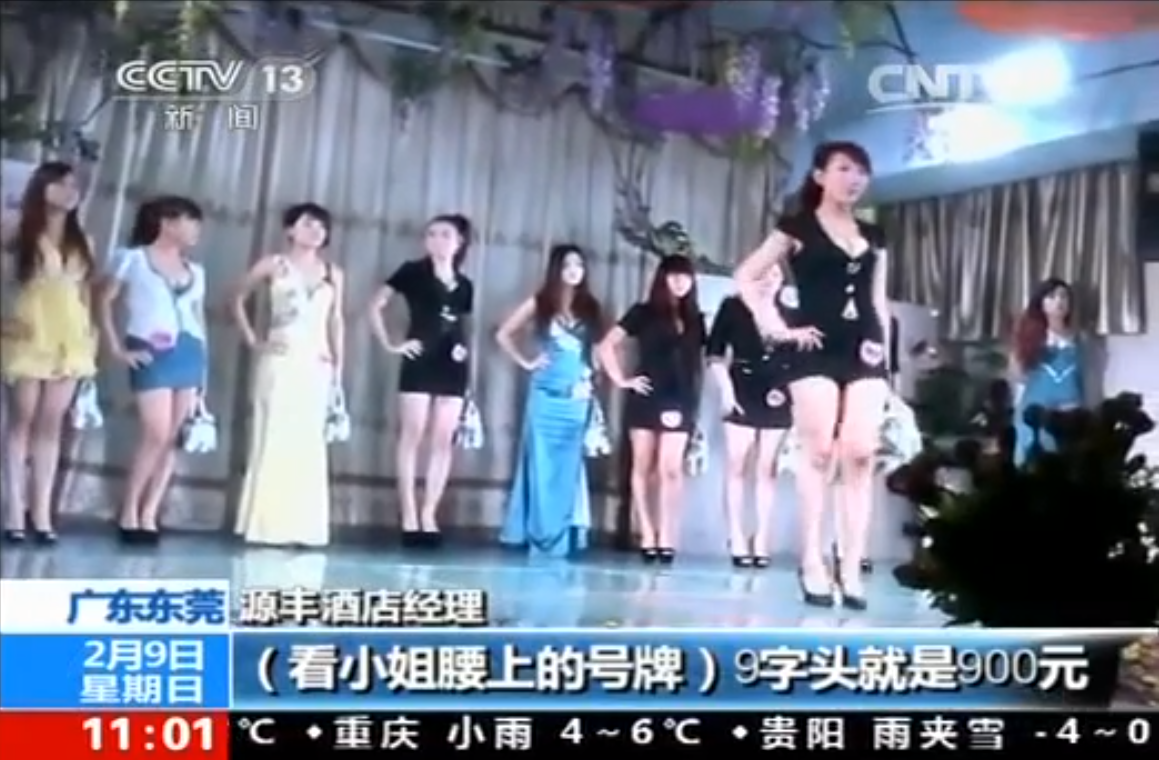 Screenshot from the CCTV exposé.

A CCTV prostitution bust has backfired on many netizens. The state news broadcaster ran an exposé last week on the southern city of Dongguan, China’s “sex capital.” Undercover reporters secretly filmed inside hotels and karaoke clubs, where women wearing skimpy outfits and price tags paraded on stage for clients. 67 prostitutes were arrested in a raid on several venues in the city after the program aired.

Some netizens replied with a big “so what,” while many showed sympathy for the prostitutes as victims of an exploitative system. “CCTV did an undercover report, but what came out was superficial, with no deeper questioning,” television host Li Jiajia told the New York Times.

Southern Media Group, which owns the liberal Southern Weekly, argued on Weibo that “far more worthy of attention are the violence in this oldest profession, the prostitutes’ living conditions and how, despite repeated crackdowns, all this continues under the protection of the powerful.” This post was soon deleted.

More weibo lampooning CCTV and pointing to the indiscretions of government officials have also been censored:

犯贱滴掏心话: A bunch of folks who can’t control their own “third legs” are trying to control the people’s. In this image, censored along with the text above it, the components of the second character in Dongguan (东莞) have been highlighted. The black 艹 (cǎo) is one of many ways netizens render “fuck” without writing it literally (肏 cào); 完 (wán) means “the end” or “over.”

媒体机: The truth according to Xinwen Lianbo: Nowadays, even the call girls are elected. Only the leaders aren’t.

SZ老狗: On my way to Guangzhou, there’s this CCTV news truck on the highway leaving Dongguan. It’s probably returning victorious from its prostitution bust. There are no license plates on the front or rear of the vehicle. It seems that morally energized CCTV reporters have no need for the law. From FreeWeibo via CDT Chinese. Translation by Mengyu Dong.