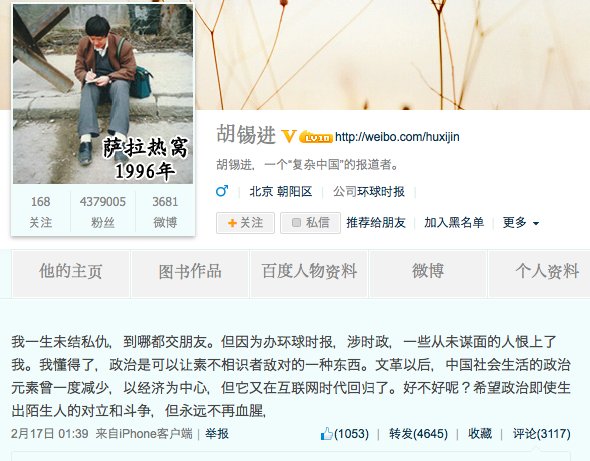 Nearly three years ago, Global Times chief editor Hu Xijin opened his own Weibo account. Since then, he has been barraged with snarky retorts to his 3,000+ posts. Supporters comment with thumb’s up emoticons and “I support you” (支持), but dissenters have typically been more elaborate and biting in their replies.

Netizens have dubbed him Frisbee Hu for diligently “catching” whatever Party rhetoric is thrown at him. One of his posts last May presaged the crackdown on Weibo’s big Vs.

In one of his very first weibo, Hu took a calm stance towards his detractors. “I believe that most of my critics would not want only supporting voices alone in Weibo and that they will tolerate ‘differences’ and ‘diversity’ in Weibo” (translated by ESWN). But judging from a comment he wrote on Monday, his patience has worn thin:

胡锡进: A grudge is nothing that I know; I make friends wherever I go. But because I run the Global Times, which involves politics, there are some people I have never met that hate me. I can understand—politics is something that can provoke hostility among strangers. Since the end of the Cultural Revolution, the profile of politics within Chinese society has shrunk, as focus centered on economics. But now in the Internet Era, politics is making a comeback. So is this good or bad? Even though politics has the ability to provoke opposition and struggle, it is my hope that it will never again result in bloodshed. [Source]

The commenters went right for him:

平壤热线: Frisbee Hu, what happened to you? Smell something in the wind again?

窝窝313: Take that disc out of your mouth. Can please we drop the innocence act? If you’re going to be the running dog of an authoritarian regime, don’t be afraid of everyone cursing you.

迷蜜密: Oh piss off, blogger man. You say one thing and do another. Could it be that you’re saying this now to give yourself an escape route later?

黄章晋ster: While he ignores how Global Times adds insult to injury, in the future, Teacher Hu can excuse his crimes by saying that he was just carrying out his duty. Compared to Sima Nan, it would be very easy for him to make an about-face.

Sima Nan, a leftist political commentator, famously said on Weibo that “America is the enemy of all the people in the world,” only to find himself depending on the kindness of Americans days after writing the post.

包蓓蓓: Politics has always been bloody. Sometimes you see the blood; sometimes it hemorrhages, and you see nothing. Politics has always existed like the air around us. It’s just that now the Internet has provided a virtual forum through which more people are openly voicing their opinions. As for spawning opposition and struggle between strangers, the situation can rather be better explained as the Internet encouraging the expression of different opinions. Average folks who take part in normal political discussion will never be the ones who bring about or decide to enact truly bloody violence.