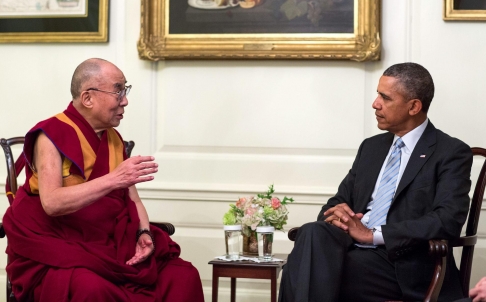 While few negative repercussions are anticipated from last week’s meeting between Barack Obama and the Dalai Lama, a conversation at ChinaFile asks what positive changes the visit might accomplish. From chinadialogue founder Isabel Hilton:

Chinese President Xi Jinping has a great opportunity, as a new leader, to make a fresh start and to challenge the vested interests that cling to the old, failed approach, but the opportunity to reach a settlement is shrinking: the Dalai Lama is no longer young, and, since his years of advocacy of non-violence have not been rewarded, many young Tibetans regard his policy as a dead end. Without his restraining authority, the situation could certainly deteriorate further.

If this small window closes, the best opportunity for a settlement that would benefit both sides will be lost. It is strongly in the interests of China’s partners to encourage a change of policy in Beijing by all possible means, including through frequent meetings with the Dalai Lama. To fail to meet him out of fear of Beijing’s protests threats risks encouraging the mistaken belief that China’s policies in Tibet are acceptable to its trade partners and to international public opinion. Such an outcome would be seen as a victory for the hardliners in Beijing. Meeting the Dalai Lama is not, in itself, enough break the policy ice in China, but it is a key signal of a commitment to a constructive and peaceful settlement. [Source]

Matteo Mecacci, president of the International Campaign for Tibet, adds:

As Bob Thurman writes, there are lessons to be learned here. European leaders should have nothing to fear from meeting the Dalai Lama. The only fear should be about a rising authoritarian China unwilling to implement basic reforms in the rule of law and justice system necessary to handle ethnic and territorial tensions. E.U. leaders should realize that they need to act in a concerted way to reduce the pressure from China on individual countries. Failure to solve the Tibet problem while the Dalai Lama is around may result in a less stable China when he is not, thus jeopardizing the trade benefits and investments E.U. leaders are so keen to see. [Source]

The prospects for a new agreement between Beijing and Dharamsala, or even of renewed dialogue towards one, appear bleak, however. Chinese Foreign Ministry spokesman Qin Gang insisted that “the door for contact and talks between the central government and the Dalai Lama remains open,” but that the Dalai Lama cannot pass through it while “essentially pursuing ‘independence in disguise.'” (The Dalai Lama says he seeks only autonomy within China, a goal backed by the U.S., but China accuses him of hiding his true intentions.) Meanwhile, Beijing protested the U.S. State Department’s appointment of a new Special Coordinator for Tibetan Issues. From Chen Weihua and Pu Zhendong at China Daily USA:

Foreign Ministry spokeswoman Hua Chunying said the Chinese government is firmly opposed to any country’s interference in China’s internal affairs by making use of the so-called “Tibetan issues”.

“We will never recognize the so-called ‘Special Coordinator for Tibetan Issues’ designated by the US as we have never before,” she told a daily press briefing in Beijing.

US Secretary of State John Kerry announced last Friday his designation of Sarah Sewall, the under secretary of state for civilian security, democracy and human rights, to serve concurrently as US special coordinator for Tibetan issues.

[…] Zhu Zhiqun, director of the China Institute and professor of political science and international relations at Bucknell University, said the problem derives from sharply different perceptions of Tibet and the Dalai Lama by the two countries.

“However, the Sino-US relationship is strong enough to withstand any negative impact of the Obama-Dalai Lama meeting,” he said. [Source]

While the White House took numerous measures to play down Friday’s visit—holding it in the relatively informal map room, and frustrating reporters by barring media access—there were also signs that this year’s meeting was more pointed than previous ones. Global Post’s Benjamin Carlson suggested that Obama’s choice of more formal attire than in 2011 signaled to Beijing that he meant business, though the president also wore a formal suit to his first meeting with the Dalai Lama in 2010. Others argue that last week’s meeting carried extra weight given changes to the international context. From Mark Landler at The New York Times:

“There is a major shift in the international climate,” said Robert J. Barnett, the director of the modern Tibet studies program at Columbia University. “The Americans have come out of the shadows and said that China’s assertiveness in maritime issues is disruptive. After many years of being cautious, the United States is speaking out.”

As a practical matter, the Dalai Lama’s struggle for religious rights for his Tibetan minority has little connection to the tangled disputes over tiny islands between China and its neighbors. But by showing support for these countries, he and other analysts said, the administration has changed the context for the Dalai Lama’s White House meetings.

“Being aggressive toward the Dalai Lama only adds to the perception, or even the reality, that China is overreaching itself in its maritime claims,” Mr. Barnett said. [Source]

Human Rights Watch’s Kenneth Roth commented on Twitter that Obama has “learned appeasing China does no good.” Similarly, AFP reported that the president “has been increasingly unabashed about taking actions that irk China”:

The Obama administration has challenged China over maritime disputes with neighbours, earlier this month questioning the legal basis for Beijing’s claims in the tense South China Sea.

“President Obama refrained in his first year from meeting the Dalai Lama and from doing other things in the hope that he was going to build a stable foundation and more trust in the US-China relationship,” said Bonnie Glaser, a China expert at the Centre for Strategic and International Studies.

“I ultimately think that didn’t pan out and I think President Obama learned from that experience,” she said.

[…] “A failure to have this meeting, or going through Obama’s second term without a meeting, would have made other countries’ leaders far less willing to stick their necks out to see the Dalai Lama,” she said. [Source]

In an interview with People’s Daily, on the other hand, Renmin University professor Jin Canrong put the meeting down not to new boldness but to American jealousy at China’s growing regional influence, and to “playing the human rights card” ahead of midterm elections. The newspaper’s overseas edition mocked the occasion by comparing to a plotline from from Netflix political drama House of Cards, whose heavy if sometimes blurry focus on China has won its second season a large audience on Sohu.com.

Meanwhile, despite Spanish efforts to restrain its crusading judges, former president Hu Jintao has been quizzed on accusations of abuses during his time in Tibet. From Patrick Boehler at South China Morning Post:

A Spanish judge has submitted 48 questions to former Chinese president Hu Jintao, giving him the chance to respond to charges of genocide brought against him by two Tibetan exile groups and a Tibetan high priest with Spanish citizenship.

The charges relate to Hu’s tumultuous tenure as Communist Party secretary of the Tibetan Autonomous Region between 1988 and 1992, which saw the most violent riots since the Dalai Lama’s departure into exile 30 years earlier.

[…] “Are you aware that as a consequence of the repression by the military and the police, imposed by law for this campaign, 450 Tibetans have been killed, 7,000 wounded, 350 disappeared and more than 3,000 were detained?” judge Ismael Moreno asked the retired leader in one of the queries, according to Spain’s news agency Agencia EFE.