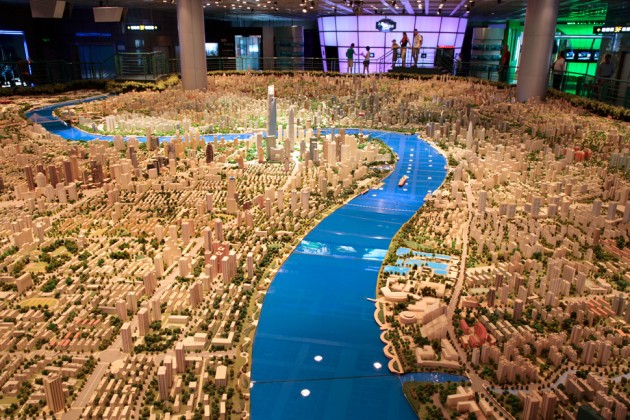 China’s leadership has put much energy into renewed urbanization efforts that will have 60 percent of the country’s population living in cities by 2020, and last week details of the new “people-centered” urbanization plan surfaced: shantytowns are to be redeveloped, transportation infrastructure overhauled to ease relocation, and the controversial hukou system to be liberalized—at long last. Bloomberg Businessweek reports on the price of China’s new urbanization plan, and rounds up comments on the new strategy from high in Beijing’s bureaucracy:

China has finally put a price tag on its massive plan for urbanization, and it’s a big one. The cost of bringing an additional couple of hundred million people to cities over the next seven years? Some 42 trillion yuan ($6.8 trillion), announced an official from China’s Ministry of Finance last week.

“The flaws in the previous model, in which urban construction mostly relied on land sales and fiscal revenue, have emerged in recent years, and the model is unsustainable,” warned Wang Bao’an, vice minister of finance, on March 17. His comments came one day after China’s State Council and the Central Committee of the Communist Party released the “National New-type Urbanization Plan (2014-2020),”which aims to lift the proportion of Chinese living in cities to 60 percent by 2020, from 53.7 percent now.

[…] “Urbanization is a powerful engine for China’s sustained and healthy economic growth, said Lou Jiwei, Chinese Minister of Finance in a news release on March 25. “We need to accelerate reform of the fiscal and tax system as well as investment and financing mechanisms,” he said, citing the need for private investment into public infrastructure projects using the public-private partnership model. [Source]

The many challenges to urbanization have been well noted. CBS News asks how likely Beijing’s ambitious and expensive plans for urbanization are to succeed:

How realistic is this plan, with its reported price tag of $6.8 trillion? China has performed economic wonders before. The nation’s adoption of a market economy, starting in the late 1970s, helped to lift 500 million Chinese out of poverty over the ensuing decades.

[…] “If managed well, urbanization can create enormous opportunities, allowing innovation and new ideas to emerge, saving energy, land and natural resources, managing climate and the risk of disasters,” Sri Mulyani Indrawati, managing director and COO of the World Bank, noted Tuesday at a conference in Beijing.

“Globally, almost 80 percent of GDP is generated in cities,” she continued. “It will be difficult for any country to reach middle-income status and beyond without getting urbanization right.”

But getting that right also means a dramatic shift in governmental and financial policies. China’s economic growth has been fueled by investment, rather than productivity. And the nation’s recent urbanization has relied on land conversion, which has led to social unrest by rural residents whose land has been expropriated. Urban sprawl has also caused an alarming increase in pollution. […] [Source]

Sri Mulyani Indrawati’s above quote came from her opening statement at the International Conference on Urban China in Beijing this week, which coincided with the release of Urban China: Toward Efficient, Inclusive and Sustainable Urbanization, a joint report from the World Bank and the Development Research Center of China’s State Council. The Huffington Post has excerpted key points from Ms. Indrawati’s speech on “new urbanization,”—the sustainable and inclusive approach that the report recommends for China:

China needs a new path to greater urbanization that will be efficient, inclusive and sustainable. Through better allocation of land, labor, and capital this new model can share the benefits of urbanization more widely than in the past. And it can be environmentally sustainable while ensuring China’s food security.

This is why we call it ‘New Urbanization.’

In this new model the government will have a different role. It will support rather than supplant market forces. It will allow China’s cities to grow more organically and efficiently. New urbanization is not merely about bricks and mortar. It puts people at the center of the strategy.

New urbanization must be affordable and it will be. On current trends, China’s cities would spend some $5.3 trillion on infrastructure over the next 15 years. But with more efficient, denser cities China can save some $1.4 trillion in infrastructure spending — or 15 percent of last year’s GDP.

New urbanization requires a comprehensive package of reforms, recognizing that the issues are closely intertwined. They have to be addressed comprehensively: Piecemeal reform will not solve the problems. […] [Source]

At the Diplomat, Zachary Keck weighs the economic benefits of urbanization against the challenges that increased urbanization could bring to the Party:

The first political risk of urbanization is that it will strain central-local relations. As I’ve argued before, the importance of central and local government relations in China is vastly understated by foreign analysts. It will also be central to many of the challenges inherent in China’s economic rebalance.

Nowhere is this truer than with urbanization. If the CCP is to successfully implement its urbanization plan, it will have to fundamentally reorient central-local relations. In particular, it will have to allocate larger budgets to China’s local governments—or empower them to raise greater revenues on their own—to allow them to fund the expansion of social services to current and future rural migrant workers.

[…] Besides the strain it will place on central-local relations, urbanization will also increase the potential for mass unrest in China. It’s no secret that there is already a massive amount of political unrest in China. The Chinese Academy of Governance, for instance, has estimated that the number of protests in China doubled between the years of 2006 and 2010, when there were 180,000 reported mass incidents. […] [Source]