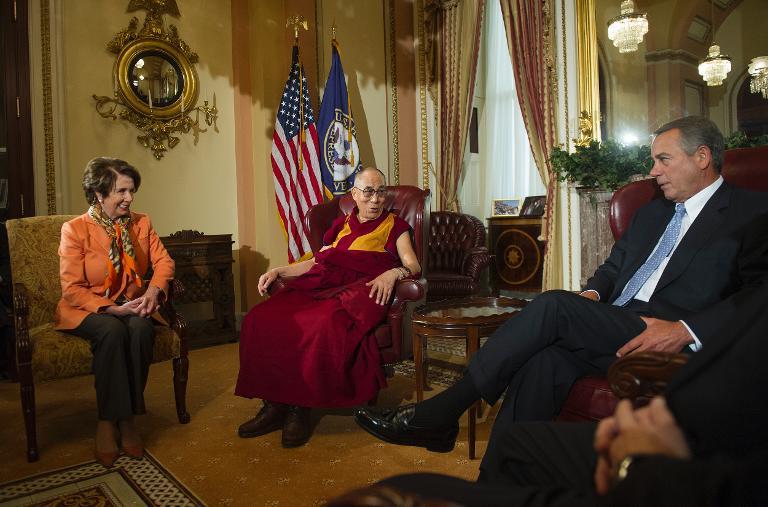 Undeterred—or perhaps spurred—by Chinese protests at the Dalai Lama’s meeting with President Obama last month, the U.S. Senate hosted the Tibetan spiritual leader on Thursday. Delivering the day’s opening prayer, he encouraged the lawmakers to “speak or act with a pure mind,” and expressed his own determination to “remain and help dispel the misery of the world.”

Afterwards, with China’s earlier complaints no doubt in mind, he urged Congress to show “self-confidence” in upholding freedom. From Shaun Tandon at AFP:

Offering advice as a “longtime friend” of the United States, the Dalai Lama said that he considered the nation to be “really a champion of democracy, freedom.”

“These traditional values are, I think, very, very relevant in today’s world. After all, you are the leading nation in the free world, So, (show) self-confidence,” the Dalai Lama said.

[…] In contrast to his meeting with Obama, which the White House took pains to portray as private, the Dalai Lama was accompanied in his talks at Congress by Lobsang Sangay, who was elected in 2011 as the prime minister of Tibetans in exile.

[…] With European nations increasingly under pressure not to see him, the Dalai Lama has taken pains to reach out across the US political spectrum to ensure support. He spoke last month at a conservative think tank, the American Enterprise Institute. [Source]

On that occasion, he discussed capitalism and the dangers of inequality; on other stops around the U.S., he has shared his views on an expansive range of other issues, including Hollywood and the media, Xi Jinping, climate change, marijuana, Pope Francis, and social networking, though he remained reticent on Tibetan self-immolations. In an interview with Larry King, due to air on March 10th, he reportedly expressed somewhat qualified support for gay marriage.

Global Times reports that the Dalai Lama’s Senate appearance will have some effect on Sino-U.S. relations, but that—as with his visit to the White House—this should not be too severe:

“This will certainly affect the Sino-US relationship as China always opposes foreign leaders meeting with the Dalai Lama,”  Xin Qiang, a deputy director of the Center for American Studies at Fudan University, told the Global Times.

[…] However, the impact of the Dalai Lama’s latest activities will be limited, Xin said.

Given the wide range of common interests between China and the US, Washington understands well China’s rising strength and role and would not be too provocative on the Tibet question, Xin said.

“Besides, policies by the Chinese government have kept Tibet stable and the influence of the Dalai Lama has been waning there,” he added. [Source]

Xin’s assessment of Tibet’s recent stability notwithstanding, the region has seen mounting tensions lead to rioting in 2008 and over 120 self-immolations, among other protests, since. In an autobiography published this week in Hong Kong, the founder of Tibet’s Communist Party argues that existing policies are failing, and urges Beijing to allow the Dalai Lama to return to his homeland. From Patrick Boehler at South China Morning Post:

Phunwang appealed to former President Hu Jintao and several members of the Communist Party Politburo Standing Committee to “allow the hundreds of thousands of exiled Tibetan compatriots headed by the Dalai Lama to return home, live and work in peace,” he wrote in the book, adding that his advice has been ignored.

[…] Phunwang in his book accuses the central government of having exacerbated tensions between China’s Han-majority population and ethnic minorities. In a chapter titled “We cannot walk the road towards a Chinese Empire”, he warns the government in Beijing that it should not rely on violence and economic development to cement its rule over its Tibetan population.

“It is significant that someone who has spent his whole life working with the Central government shows this kind of dissatisfaction with its policies,” said Bao Pu, the book’s publisher.

The critique comes from the guerilla leader who founded Tibet’s Communist Party in the 1940s before merging it with Mao Zedong’s in 1949. He assisted Mao in his early negotiations with the Dalai Lama but was incarcerated in 1958, a year before the Dalai Lama fled to India. [Source]

Phunwang explained his argument for rapprochement with the Dalai Lama in a 2004 letter to then-President Hu Jintao (PDF):

[…] In regard to this very significant question, many outstanding and educated people think it is better for him to come back. After the Dalai Lama has returned to the nation, the essence of the issue would be significantly transformed into a domestic matte~, an internal controversy. Although certain problems may occur, after all these will be minor problems that can be solved and can be amicably solved. Moreover, after the Dalai Lama with his heart of compassion comes back to the nation, all the Tibetans who believe in Buddhism would set their minds at peace instead of being in emotional conflict, so the worries would be baseless.

[…] Regarding the question of social stability, [some Tibetans based abroad] have also said: “Everybody knows that the Dalai Lama has supreme faith, an outstanding personality, and he is a simple monk, a Nobel Peace laureate, a devoted Buddhist who insists on non-violence and has no selfish considerations and is always concerned for others. He has consistently been against riots and violence in any form or name, thinking that is as stupid as ‘throwing eggs against rocks’, so the situation is apparently stable due to his control and influence. But once he passes away everything will be uncertain. The situation could be out of control. Those young people who have been advocating resistance – especially those Khampas and Amdowas who are martial in spirit – will carry out all kinds of extreme actions”. […]

[…] All in all, as long as the Dalai Lama, the spiritual leader of devoted Tibetan Buddhists, the one who is the cohesive force for the Tibetan religion, can return to the nation, from a standpoint of overall relations and their trends we can then “bring in peace and stability at home and abroad”. [Source]

See more discussion of the way forward for Tibet via CDT.