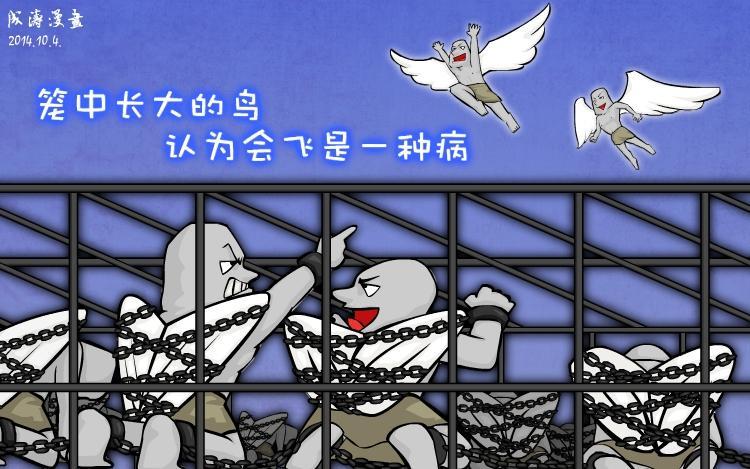 Chinese state media have portrayed the protests in Hong Kong as the work of a small group with “ulterior motives,” backed by foreign governments and threatening the special administrative region with chaos. Combined with intense censorship of online discussion, this coverage has succeeded in moving lots of mainlanders to oppose the protests. Chao Deng at the Wall Street Journal found the opinion of mainland students in Hong Kong mixed at best, while one man in Beijing told the Washington Post’s Simon Denyer, “Democracy, in its nature, is in contrast with unity, which calls for some proper control and dictatorship.”

But sympathy for the protesters is still visible on Chinese social media. On BSS forums and Weibo, some netizens have passed around a quotation attributed to filmmaker Alejandro Jodorovsky, “Birds born in a cage think flying is an illness.” Cheng Tao varies the quotation in a cartoon shared on Weibo: “Birds which grow up in a cage think the ability to fly is an illness.” Winged men, caged and in chains, jeer at their peers soaring above them. 武媚静子YY asks Cheng Tao in the comment thread, “Does the kneeling people even know to look up into the free sky?” (跪族哪懂得仰望自由的天空)