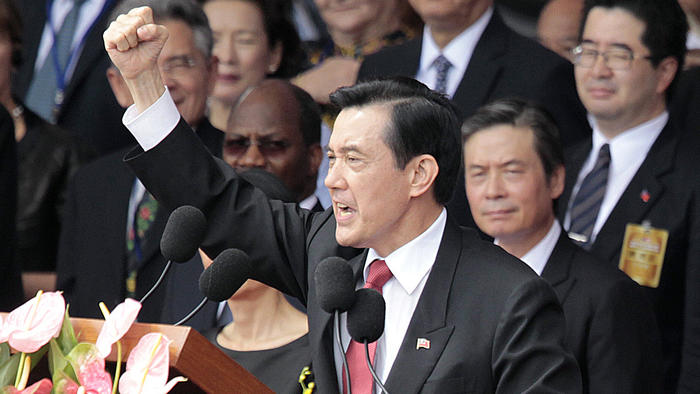 President Ma Ying-jeou used Taiwan’s National Day celebrations to urge Beijing to embrace democracy and political reforms in the same way it embraced economic reforms under Deng Xiaoping. Ma’s remarks, which speak to the broad support that Taiwan has shown for Hong Kong’s democratic struggle, came after scheduled talks between the Hong Kong government and the demonstrators were called off this week. From AFP:

Taiwan’s president, Ma Ying-jeou, has called on Beijing to “let some people go democratic first” as he expressed support for protesters who have paralysed parts of Hong Kong for nearly two weeks.

[…] “Thirty years ago, when Deng Xiaoping was pushing for reform and opening up in the mainland, he famously proposed letting some people get rich first. So why couldn’t they do the same thing in Hong Kong, and let some people go democratic first?”

Ma said “China would simply be making good on a pledge made 17 years ago, when they said that for 50 years they would allow rule of Hong Kong by the people of Hong Kong, a high degree of autonomy, and election of the chief executive through universal suffrage”.

This would be a “win-win scenario” for both China and Hong Kong, as well as a huge boost for the relations between Taipei and Beijing, Ma added. [Source]

The pro-democracy protests in Hong Kong, which have been closely watched in Taiwan and elsewhere on China’s periphery, have evoked concerns about what might befall Taiwan should it ever reunite with the mainland. From Ralph Jennings at The Los Angeles Times:

China regained sovereignty over Hong Kong from Britain in 1997, pledging a “one country, two systems” form of rule that would give the world financial center a high degree of autonomy for 50 years. Authorities in Beijing have long advocated the same kind of model to reunite Taiwan with the mainland.

Taiwan, 100 miles off China’s southeastern coast across the Taiwan Strait, is ethnically Chinese but has been self-governed since the 1940s. Beijing maintains a claim of sovereignty over the island of 23 million and has threatened to take it by force.

[…] “Taiwanese are afraid that if you can’t sustain ‘one country, two systems’ in Hong Kong, then it wouldn’t work here, and that’s why Taiwan is paying attention,” said Ku Chung-hua, 58, a standing board member of Citizen Congress Watch, a group that monitors Taiwan’s Legislature. “The Hong Kong problem makes people here think ‘one country, two systems’ is a deception.” [Source]

In a letter to The New York Times, James Yu of Taiwan’s de facto consulate in New York argues that “Taiwan will not be tomorrow’s Hong Kong.”

[…] Taiwan will not be tomorrow’s Hong Kong. The Republic of China (Taiwan) is a free democratic country with its own government and military; the two are inherently different. Moreover, the vast majority of the people in Taiwan have consistently rejected the idea of the “one country, two systems” formula.

We call on the leaders in Beijing to honor their promise and listen to the demands of the people of Hong Kong or risk undermining their credibility in future regional negotiations. [Source]

Also read about Taiwan’s Sunflower Movement and the parallels it shares with Hong Kong’s demonstrations.

As WHO Meets, China Agrees to COVID Inquiry While Shutting out Taiwan