Drawing the News: Another Brick in the Firewall 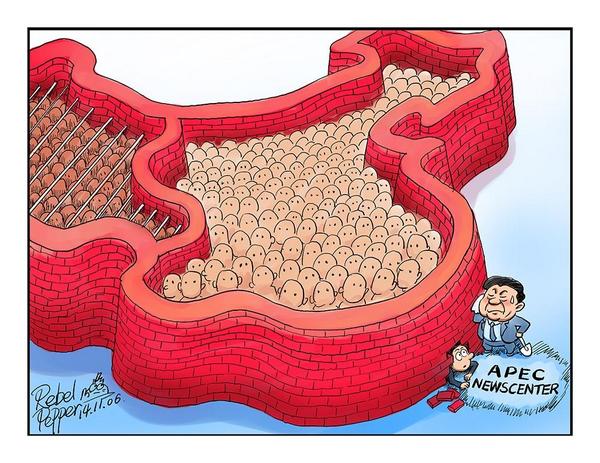 Beijing has been quieted down in preparation for this week’s APEC summit. Students got an extra holiday, workers were sent home and encouraged to get out of town, and an even-odd license plate scheme keeps traffic flowing and skies blue. Factories have even shut down for the week.

Amid all these restrictions, one thing has been let loose, at least in a corner of the city. The APEC media center gives reporters access to the free, unfiltered Internet. (There are two media centers, one at the China National Convention Center and another at Yanqi Lake. It is unclear if one or both have unblocked Internet access.) This comes as a breath of fresh air, as China has been working hard to strangle virtual private networks (VPNs) and emphasized its prerogative to “choose our friends” among foreign web and tech companies.

Cartoonist Wang Liming (Rebel Pepper), currently extending his stay in Japan after he was called a “traitor” on a mainland website, has little regard for the modicum of freedom afforded reporters covering APEC:

Blocking off the Internet has made the P.R.C. just like an enormous prison. The CCP has made a small concession for APEC, giving journalists access to the free Internet at the APEC news center. When compared to the entire mainland, or to the even more heavily censored regions of Xinjiang and Tibet, this tiny news center–this window opened temporarily–is a 21st century joke.

In Rebel Pepper’s cartoon, President Xi Jinping wipes his brow as he stands on a patch of grass outside the Great Firewall. He has knocked a few bricks out of the wall, and one person has crawled through to cautiously look around. Everyone else is trapped behind the wall. For good measure, Tibet and Xinjiang are sealed off from the rest of the country, and a ceiling of metal bars discourage wall-jumping. The media center may wow users with its elaborate food hall and cultural activities, and reporters may delight in their unfettered access to Facebook, but in the end, it is only a small concession.