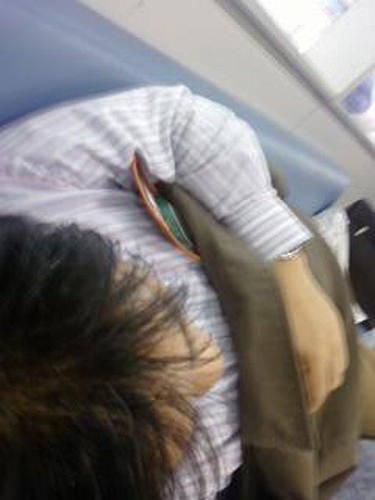 After being denied re-entry to China eight times, Feng Zhenghu lived in Tokyo’s Narita Airport for 92 days in 2009-2010. Now Feng is telling the story of his airport odyssey on his blog, and CDT is translating his account. This is the third installment. Read Part 1 and Part 2.

In the morning, with the permission of an immigration official, an All Nippon Airlines (ANA) guard took me to buy three onigiri and a bottle of water. I ate two that morning; after that no one was willing to buy food for me. At noon I ate the last onigiri, and that evening I began my fast.

I had mentally prepared myself for my my forced deportation to Japan, and foresaw its conclusion. On September 1, I sent a letter to Hu Jintao saying, “I completely understand that Shanghai border police may put me on a plane back to Japan, but if I’m unwilling to cross the border into Japan and therefore renounce my Japanese visa, the Japanese government will be unable to force a foreign citizen to enter the country, and will by law only be able to deliver me back to China. If Chinese border police again refuse to allow me to return to my country, this could trigger a diplomatic dispute, and ultimately the Japanese government, on the basis of international conventions and Chinese and Japanese law, could force the Chinese government to bear all responsibility and receive its citizen. If it comes to this, it would deal a great blow to China’s reputation. As a Chinese citizen, I am unwilling to accept this type of humiliation—are you? So, I have recently set off on a slow and measured return to allow Chinese leaders time to reflect, to stop the Public Security Department from playing with fire, and to take initiative towards resolving this crisis so that I can return to my homeland.”

Over the past six months, I’d done my best to avoid this scenario, but that had proven impossible. The situation I had hoped against had befallen me, after all. Hu Jintao didn’t read my letter; the officials who did were perhaps indifferent to my warning. For their own personal benefit and reputation, the lawbreaking Shanghai officials disregarded the country’s benefit and reputation, the sanctity of the law, and the self-respect of the nation, kidnapping a Chinese citizen to Japan on a Japanese airplane, attempting to force his exile to Japan. All this at the risk of universal condemnation and national humiliation. Myself and the Chinese government were both the losers.

Powerless to resist the Shanghai authorities, I was driven to revolt. I became an international refugee, one man resisting a formidable nation alone. Dressed in my protest clothes at Japan’s door, enduring starvation, facing countless travelers from countless countries as they entered Japan, I protested the illegal conduct of the Shanghai authorities and the airline, and called on the Chinese and Japanese governments as well as the public to heed my right to return home. I implored the Chinese government to fulfill its national responsibility in protecting a citizen’s right to return home, and investigate the legal responsibility of those who had violated the law. I implored the Japanese government to urge the airline that had participated in my kidnapping to bring me home.

I had thought carefully about pushing through the border back home, but had still overlooked a few things. The outbound lounge and thoroughfare at Narita Airport has many stores, restaurants, and beverage vending machines, but the inbound lounge and hall doesn’t have any. Furthermore, both the inbound and outbound hallways are shut off from each other–only airport personnel are allowed to pass between them. I was in the inbound hall. If I didn’t enter Japan, and if no one brought me food, I would simply have to starve. If I fell ill, it would be hard to carry on my protest, sleeping in the open at the airport, for very long. I hadn’t thought about this, and so hadn’t brought any provisions. Without rations, I could only risk my life in combat, resign myself to fate, and rely on endurance and luck.

In the evening, I drank a few mouthfuls of tap water, washed my face in the restroom, and bundled up on a bench for sleep. An upright, dignified Chinese person who, unable to return to country or home, was reduced to an international beggar camped out on Japan’s doorstep, perched on a chair provided by Japan as charity. The sorrow in my heart was far greater than my hunger pangs. [Chinese]