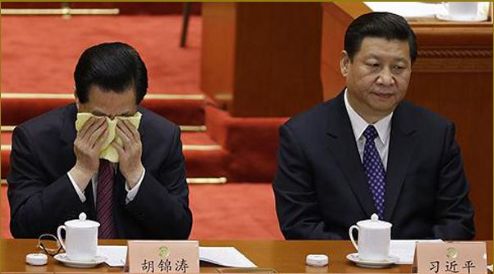 Last month, censors took note of a photo from the March, 2013 Chinese People’s Political and Consultative Conference that resurfaced on Weibo with a witty netizen caption. The photo, in which outgoing President Hu Jintao appears to be sobbing into a handkerchief next to a deadpan Xi Jinping—who would take the presidential baton weeks later—accompanied a joke referencing the broad anti-corruption campaign that has characterized Xi’s presidency to date. This joke followed closely on the tails of the Central Commission for Disciplinary Inspection’s announcement of an investigation into former top Hu aide Ling Jihua.

The people finally know the former president’s pain: the polices and legal system are led by bad guys; the military leaders are all bad guys; the CPPCC are all bad guys; the vice-president, department chiefs, bureau directors, section heads, and various local officials are bad guys too; and now even the senior aide who was in charge of giving you ideas turns out to be a bad guy.

President Hu, you’ve really had a rough go of things over the last 10 years, fighting in the heart of the enemy for all this time!

It’s no wonder you’ve been crying in public lately.