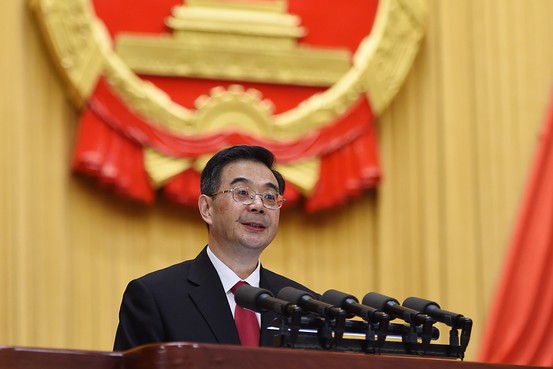 The Party’s unveiling of its vision for a “Socialist rule of law” last fall, with its inauguration of an official Constitution Day holiday, was greeted with mixed reactions at best. Sharp rhetoric from president Xi Jinping and a continued campaign against activists and wayward lawyers have done nothing to reassure. At China Real Time, Stanley Lubman discusses developments including the Supreme People’s Court’s new five-year plan and attacks on Western ideology:

What remains unclear is whether Chinese leaders intend to make meaningful changes within that framework to raise the quality of Chinese justice or are merely paying lip-service to justice as they continue the old patterns of authoritarian control.

[…] Professor He Jiahong, who teaches about criminal law and anti-corruption investigation techniques at Renmin University, provided a candid view of one of the major, deep-seated obstacles to legal reform: the mentalities and habits of police, prosecutors and judges who see themselves as arms of the state. “It will take a long time” to resolve that problem, he told an interviewer.

[…] At this time there is no current movement that would join forces to accelerate law reform, but pressures from different sectors of the economy and society might impel the leadership to increase the pace – working within the party — of improving the organization and operation of the courts. Judicial reform now seems to be inching forward, but meaningful progress remains a distant goal. [Source]

At Supreme People’s Court Monitor, Susan Finder notes SPC president Zhou Qiang’s assessment that judicial reforms have entered “deep water.” She describes a range of pending reforms and looming difficulties, and points out a mismatch between the political prominence of criminal law and the predominance of civil cases (including labor and environmental disputes) in the courts’ actual workload.

The primary focus of the work report (as always) is law and order, as seen from the perspective of Communist Party leadership, particularly state security related offenses (including terrorism and “splittism”) as well as ordinary crimes.  A big difference in this year’s report is that President Zhou Qiang apologized for previous miscarriages of justice and highlighted efforts to prevent future ones [see background at CDT]. […]

[…] All of these reforms create tremendous challenges for the courts. The number of cases accepted by the courts in 2014 (15,651,000) was up about 10%.  The judicial reforms to petitioning and other reforms will channel more disputes into the court system. Planned personnel reforms are leading to an exodus of young judges.  Many of the planned judicial reforms are intended to the way the courts operate internally and interact with other institutions. The 4th Five Year Court Reform Plan sets out target dates for accomplishing certain major judicial reforms.  The salary gap between what an experienced lawyer in private practice in a major law firm and a counterpart in the judiciary is large, leading many talented people to prefer the greater financial benefits and professional flexibility that comes with being a lawyer.

The political leadership has approved the 4th Five Year Court Reform Plan. Issuing it raises expectations among ordinary people as well as those in legal profession. The pressure is on for the Court leadership to deliver on the promised judicial reforms. [Source]

Read more on the “exodus” of judges over low pay for long hours via CDT.

Unlike some other countries with an authoritarian bent, notably Singapore, where the state not only restricts political freedoms but also heavily regulates social practices and moral norms, China’s current governance system is perhaps best described as selective authoritarianism. In this system, the state concentrates its power and resources on policing activities and behavior that are seen as potentially threatening to the existing political order, but otherwise cares much less about social or moral order.

[…] Anyone who follows media reports of police brutality in China and the frequent crackdowns on dissidents and other citizens who protest the willful infringement of their rights by the state could be forgiven for assuming that ordinary people in China cower before law enforcement. In fact, there are numerous stories of the police suffering verbal and physical abuse when they try to stop those who break rules.

[…] Not just the lack of traffic order on the roads, but a whole range of persistent governance challenges China faces, from weak enforcement of environmental laws to difficulty in securing food safety, can be attributed at least in part to its system of selective authoritarianism. For the most part, only problems that are perceived as having the potential to threaten “social stability” – and hence the regime’s stability — are dealt with in a determined manner. [Source]

Lu notes an expansion of this focus under Xi Jinping, however, citing the recent censorship of prominent cleavages in a historical TV drama. This trend, she suggests, may be an important factor in the currently hot issue of the Communist regime’s very survival.