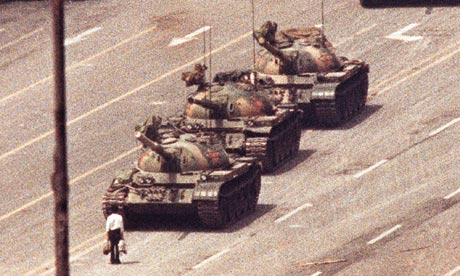 On this 26th anniversary of the June 4, 1989 military crackdown on protesters in the vicinity of Tiananmen Square in Beijing (which coincided with several other crackdowns on pro-democracy demonstrations in China), several terms related to the event are unsearchable on Sina Weibo. Many of the blocked searches listed below have been blocked before. See our Sensitive Words posts from June 2012 and June 2013, and searches banned on May 22, May 27, and June 4 of last year.

For an extensive list of June 4-related terms currently blocked, see the words highlighted in grey on CDT’s regularly updated spreadsheet database of sensitive words. Among the terms forbidden from searches today:

Reports from several overseas media organizations mentioned that attempts at WeChat “red envelope” money transfers with values containing “64” and “89” would not go through on June 4th in Beijing. The Wall Street Journal’s Eva Dou and Gillian Wong tested the transaction:

An amount to remember: WeChat mystery on June 4 http://t.co/McXUwg9ejY by @gillianwong

Noted China-watcher Bill Bishop, however, tweets that his own attempts went through unfettered:

Sensitive Places and People:  References to the public plaza in which the Beijing movement and subsequent crackdown centered around are also blocked, including “天安门” (Tiananmen), “天an门,” “Tiananmen,” “TAM,” and even “广场” (public square).  The names of several relevant people are also unsearchable. Among them, “胡耀邦” (Hu Yaobang), the purged liberal official whose death catalyzed Beijing’s democracy movement, and “赵紫阳” (Zhao Ziyang), the CCP General Secretary sympathetic to the student demonstrators who was purged following the crackdown and then placed under house arrest, where he remained until hospitalized just before his death. Last month, authorities at last agreed to allow Zhao’s family to formally lay him to rest ten years after his death. Pinyin searches for “Hu Yaobang” and “Zhao Ziyang” do yield results. Also blocked is “丁子霖” (Ding Zilin), the mother of one of the first protesters killed on June 3, 1989 and a leader of the Tiananmen Mothers group. A pinyin search for “Ding Zilin” also returns results.

Sensitive Activities: Searches for commemorative activities and associated paraphernalia are also blocked, including “致敬” (to pay respects), “缅怀” (to commemorate), “纪念” (to remember),  “烛光” (candle-light, as in candle-lit vigil), and “蜡烛” (candle).

Censoring social media searches is just one tactic used by Beijing to ensure that June 4th remains firmly at the bottom of the memory hole, another being the annual rounding-up of activists likely to publicize the anniversary. While government efforts to erase the date from historical memory have seen success over the past 26 years, this year there has been indication that younger generations of Chinese are taking note (helped along by the Global Times inadvertent promotion of an open letter by overseas Chinese students). At Foreign Policy, Louisa Lim, author of “The People’s Republic of Amnesia: Tiananmen Revisited,” notes that Chinese authorities are becoming ever more successful in promoting their official historical narrative outside of the borders of the PRC:

In late May, a new line was crossed when two prominent Hong Kong figures were blacklisted not by China, but by Malaysia, for trying to speak publicly about June 4. Student activist Joshua Wong and lawmaker Leung Kwok-hung— popularly known as Long Hair — had been invited to give talks on the Tiananmen crackdown. They were refused entry at the border and sent back to Hong Kong. The country’s police chief said it was necessary to avoid jeopardizing Malaysian ties with China.

[…] Inside U.S. universities, the notion of a blacklist has a chilling effect. The best-known scholars of Tiananmen, Perry Link and Andrew Nathan, who co-edited The Tiananmen Papers, have been refused Chinese visas, as have other U.S.-based scholars working on Xinjiang and Tibet. Yet who knows how many other scholars have steered away from “sensitive” topics for fear of losing access to China. As Jeremy Brown, a historian writing a book on Tiananmen, pointed out in an email to me, “By even asking or considering the question, the feared ‘blacklist’ of banned scholars has served its purpose and starts to win. That’s really bad for academic inquiry.”

Journalists, too, are subject to intimidation. In May 2013, I conducted a crude survey to gauge how much today’s students know about June 4. I showed 100 students from four different Beijing universities the iconic photo of “Tank Man,” the skinny young man facing down a column of tanks on the Avenue of Everlasting Peace. Eighty-five percent of them could not identify the picture. […] [Source]