Meme of the Week: Mom Is Calling You Home for Dinner 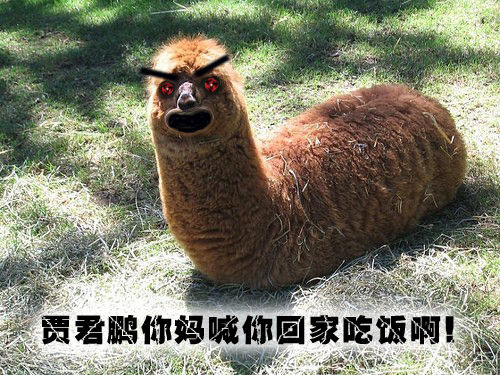 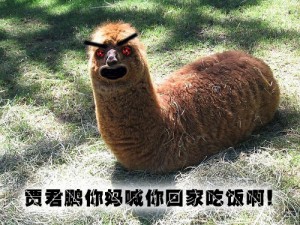 “Jia Junpeng, your mother is calling you home for dinner!” screams the grass-mud horse. (Source: ChinaSmack)

On July 16, 2009, this message was posted anonymously to Baidu’s World of Warcraft forum. Within two days, the stream had garnered eight million views and over 300,000 comments. It became a massively popular Internet meme, spawning countless Photoshopped images and much commentary on the social significance of the original post.

On the very same day that Jia Junpeng achieved Internet stardom, blogger Guo Baofeng (a.k.a. Peter Guo, and@amoiist on Twitter) was arrested after posting information about an alleged gang-rape and murder by local officials in Mawei, Fujian. After covertly snatching back his cellphone, Guo informed his Twitter followers that he was under arrest (Twitter was still accessible in China at the time). One of his followers asked Web users to send postcards to the jail in which Guo was being held, and images with the message “Guo Baofeng, your mother is calling you home for dinner” began to circulate widely online. Guo was released 16 days later. He has blogged about his detention.