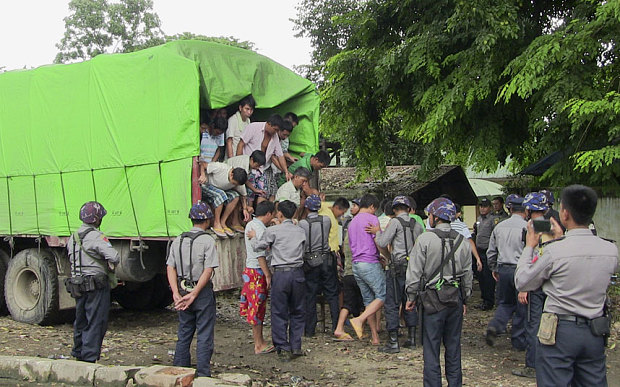 In Myanmar, 155 Chinese citizens have been sentenced—all but two to life—for illegal logging. Reuters reports:

A court in Myitkyina, capital of Kachin State in the north of Burma, handed down sentences to 155 Chinese citizens on Wednesday. Two of those convicted escaped life sentences and got 10-year prison terms.

All will have a chance to appeal against the rulings, said a court official, who declined to be identified as he was not authorised to speak to the media.

[…] The individuals were arrested in January in a crackdown on the country’s lucrative illegal logging and timber trade launched by the military, police and forestry department.

More than 400 vehicles and 1,600 logs were seized during the raid, state media said at the time.

In June, Aye Myint Maung, a deputy environment minister, told parliament that 10,000 tons of illegal timber had been seized from illegal loggers since January, most of it from Kachin State. [Source]

Spokesperson Lu Kang said China had made representations with Myanmar over the matter.

China has asked Myanmar to take China’s concern seriously, take every factor into account and properly handle the case, he said.

Since these Chinese nationals were arrested by Myanmar at the beginning of this year, China has repeatedly raised representation with Myanmar from various channels, he said.

China has requested the Myanmar side to consider the actual situation of those loggers and deal with the matter in a lawful, reasonable and sensible way, he said.

According to a report by Alison Hoare at Chinadialogue, China’s booming demand for timber is “having knock-on effects throughout the global market” and fueling the illegal lumber trade:

China has less stringent controls on imports than most western countries and limited incentives in place to encourage sustainable sourcing. The result is that global progress in tackling illegal logging has slowed right down. Indeed, the total volume of illegal timber imports into 10 key processing and consumer countries actually increased by 10 million cubic metres between 2000 and 2013, to 60 million cubic metres – a rise of nearly US$8 billion (49.64 billion yuan) in value terms.

Nearly all of this increase was accounted for by the rise in illegal imports to China, which almost doubled in volume over this period. India and Vietnam also saw significant growth in illegal timber imports, while all the other countries studied saw the volume of imports decline or stay at about the same level. Notably, however, over the same period, illegal trade as a proportion of the whole declined in almost all countries, including in China, where the proportion of illegal imports fell from 26% to 17%.

[…] To be fair, as outlined in an earlier blog post for chinadialogue, China has already taken some steps towards reform, including enhancing international cooperation, and promoting sustainability certification among its companies. However, most efforts remain voluntary and China lags behind other major timber-importing countries in addressing the issue. Critically, it has no legislation in place banning import of illegal wood-based products and no national action plan. [Source]

Last year, an investigation by National Geographic found that illegal logging by Chinese companies was exacerbating tensions between the Kachin Independence Organization and the government in Kachin State.

Read more about China’s relations with Myanmar and about logging by China, via CDT.