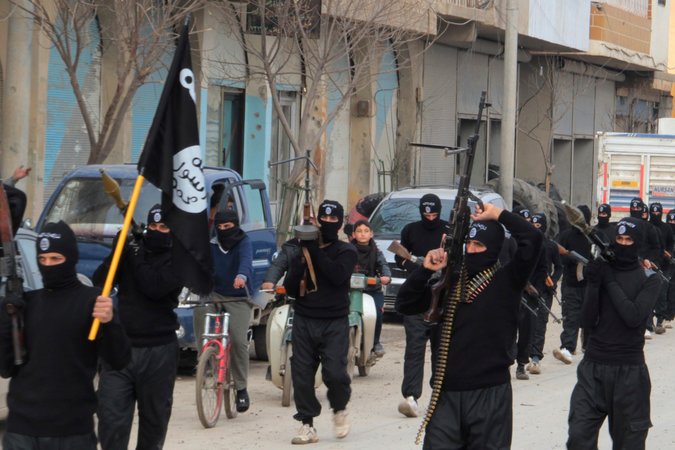 In a rare effort to recruit Chinese Muslims, the Islamic State recently released a chant sung entirely in Mandarin Chinese calling on Muslims in China to “wake up” and join the fight in the name of Islam. At The New York Times, Edward Wong and Adam Wu report:

The group recently posted a digital recording of a new chant in Mandarin Chinese that calls for Muslims to “wake up” and “take up weapons to fight.” The chant is typical of many others released by the group, also called ISIS or ISIL.

The chant was posted online by Al Hayat Media Center, the foreign-language media division of the Islamic State, according to an assessment on Monday by the SITE Intelligence Group, which tracks the propaganda of jihadist groups.

The chant, or nasheed, is an exhortation to rise up but does not specify a target. (See below for a full translation.) It could be aimed at placing China in the cross hairs. The Islamic State’s leader, the cleric Abu Bakr al-Baghdadi, released a recording in July 2014 in which he named China as one of many countries in which “Muslims’ rights are forcibly seized.” [Source]

The recording comes only weeks after the Islamic State executed Fan Jinghui, a Chinese national who had been held by the terrorist group for ransom. The following is an excerpt of the chant translated by Josh Chin at China Real Time:

At Quartz, Nikhil Sonnad explains how IS’ choice of Mandarin suggests that the chant is more likely a warning than a recruitment drive:

The Chinese government and Communist Party have a very sensitive relationship with the country’s 20-million-plus Muslims. This is especially true of the ethnic Uighur minority that lives in western China’s Xinjiang Province, where acts of terrorism have been carried out several times. But ethnic Uighurs speak a Turkic language that is completely unrelated to Mandarin. While younger Uighurs are taught in Mandarin (paywall), those with a separatist and anti-China bent are not likely to care much for the language.

[…] It seems more likely that doing the song in Mandarin is simply a way to direct a warning at all of China. The song is sure to annoy the Chinese Communist Party, as ISIL has been doing more often of late. Last month, the terrorist group murdered a Chinese national for the first time, and in another video it implicitly acknowledged Taiwan as a country. [Source]

At The Diplomat, Shannon Tiezzi writes that certain aspects of the chant, such as the use of words like “slavery” and “shame,” seem to be directed specifically at a Chinese audience:

[…] The song references Muslims having been “enslaved for a century,” with “shameful memories” of that period. That speaks to China’s rhetoric of a “century of humiliation” visited on China by foreign powers – with an ironic twist that implies China was part of the oppressors. The video also urges Muslims to help regain Islam’s lost historic glory, which has hints of Xi Jinping’s “China Dream,” a drive by Chinese people to “rejuvenate” their historically great nation.

China’s narrative of historical glory, humiliation, and the struggle to return to glory has been co-opted by ISIS in this video – only in this case the struggle is unabashedly violent. “Dying on this battlefield is our dream,” the song says, urging listeners to pick up weapons and fight in accordance with holy commandments.

It’s difficult to say if ISIS’s Mandarin-language video will have any impact in China. China blocks Twitter and Telegram, the two social media tools used to distribute the video, according to SITE Intelligence Group. However, the fact that ISIS is intentionally reaching out to a Chinese audience is a worrying indicator of the group’s ambitions.  [Source]

In response to the video, China’s Foreign Ministry called for greater international cooperation in combating terrorism. The call echoes an appeal directly from President Xi in the immediate aftermath of the deadly attacks on Paris last month. Reuter’s Ben Blanchard and Michael Martina report:

Foreign Ministry spokeswoman Hua Chunying said she could not comment on whether the recording was issued by Islamic State, but said it showed that “terrorism is the common enemy of mankind” and the need to stop extremists using the Internet.

“In the face of terrorism, no country can stand on its own, and the international community should stand closer together and cooperate to jointly strike against all forms of terrorism,” Hua told a regular news briefing on Tuesday.

“At present, relevant countries have proactively coordinated and consulted on their anti-Islamic State actions in Syria and they have had definite progress on fighting terrorism,” Cheng added. [Source]

In recent years, Beijing has repeatedly criticized the West for having “double standards” regarding China’s counterterrorism efforts. A nationwide anti-terror campaign was launched last May following a series of attacks throughout the country  blamed on Xinjiang separatists and religious extremists. Amid the campaign, several policies aimed at Uyghurs have been criticized by rights groups. Authorities and state media have repeatedly attempted to link Xinjiang violence to the global jihad movement, but regional media restrictions and controversial ethnic policy do little to win Beijing international support for claims regarding domestic terrorism. At The Telegraph, Neil Connor reports that Chinese authorities have used the new IS recruitment propaganda to support their claim that China is unfairly subject to Western “double standards”:

China has criticised the West, particularly since the Paris attacks, for displaying double standards in labelling attacks carried out in foreign cities as “terrorism” while failing to use the term for unrest within its borders.

Rights groups, however, claim the violence which has occasionally spread outside of Xinjiang and across China stems from religious and cultural oppression from Beijing.

“A Chinese-language propaganda song will remind the rest of the world that China is also a victim of terrorism. Some countries need to abandon their double-standards on anti-terrorism issues in China,” Wu Shaozhong, an intelligence expert from the People’s Public Security University of China, told the fiercely nationalist Global Times. [Source]

Last week, Chinese state media took quotes out of context from a French-language article on Xinjiang to attack journalist Ursula Gauthier for exercising so-called “double-standards” in her reporting. Also see a recent essay by Chang Ping arguing that such “double standards” often cited by Chinese authorities are a natural consequence of their own policies.

Earlier this week, Chinese authorities arrested four individuals suspected of carrying out terrorist plots in the northern province of Shanxi.