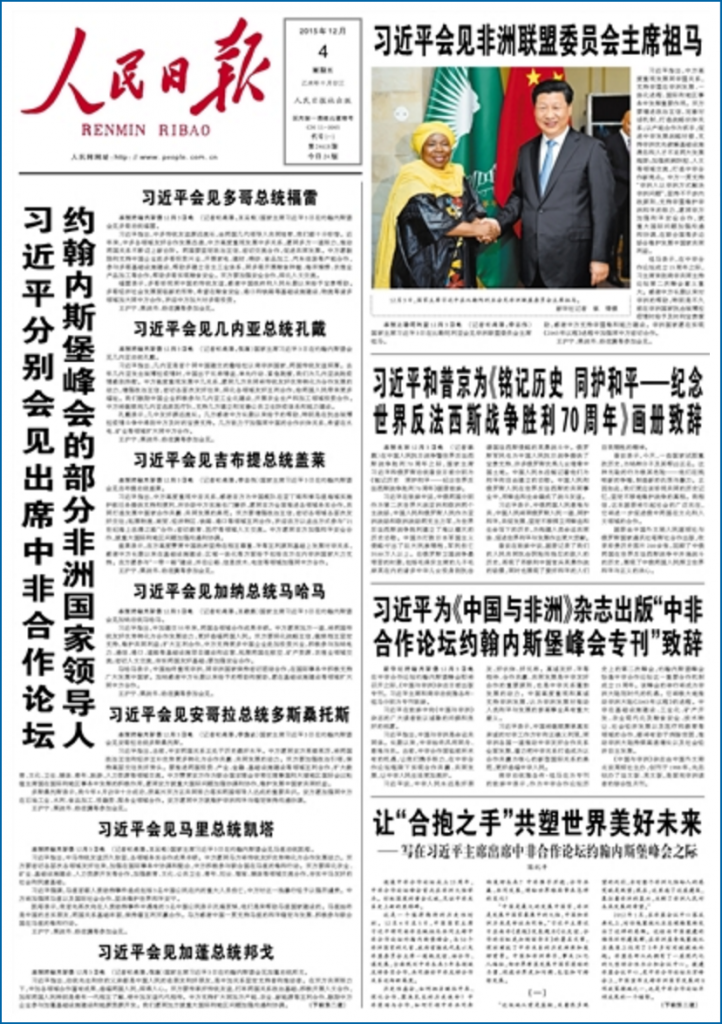 Recent months have seen a tightening of the reins on domestic Chinese media: “ethics codes” including pledges to “protect the leadership of the Communist Party of China and the interests of the state”; harsher penalties for spreading “false news,” an often politicized label; and the continued threat of detention for leaking “state secrets,” another abusable designation. The Party’s primary mouthpiece, meanwhile, is leading by example, boosting a sustained and intensive campaign to promote President Xi Jinping’s personal image. As China Real Time’s Felicia Sonmez noted, Xi occupied eleven headlines or subheadings on the front page of Friday’s People’s Daily, and also dominated pages two and three:

In a study released last July, the University of Hong Kong’s China Media Project found that Mr. Xi’s name had graced the pages of the People’s Daily more than any other Chinese leader since Mao. In the first 18 months since he rose to power, Mr. Xi was mentioned by name in the paper 4,725 times, compared with 2,405 and 2,001 times for his predecessors Hu Jintao and Jiang Zemin during a similar period, the study found.

Since the end of the Mao era, the Communist Party has explicitly sought to avoid any form of personality cult. The question going forward, Mr. Bandurski said, is whether the focus on Mr. Xi is a signal that the party’s emphasis on collective decision-making is weakening. [Source]

One side of Xi not eligible for front page headlines is his family’s business dealings: a leaked media directive on Friday warned outlets to downplay the withdrawal of his cousin’s nomination for a corporate directorship, adding that “coverage is prohibited from mentioning related national leaders. Violators will be seriously punished.”

There are a many other examples, outside the pages of the People’s Daily, showing how Xi Jinping has been elevated on all propaganda fronts. In the latest edition of Southern Weekly, once the standard bearer of a more freewheeling style of professional journalism in China, praise for the glorious leadership of Xi Jinping is marquee coverage. Read the Southern Weekly piece, which runs more than 10,000 words, and weep: Oh, how far the mighty have fallen into the pit of positivity!

[…] It is too early, perhaps, to formally call Xi Jinping’s personality cult. But it is a perfect time to review Clause 6 of Chapter II of the Constitution of the Chinese Communist Party:

President Xi Jinping is personally in charge of all major political initiatives in China lest the nation sinks like the Titanic, according to a Southern Weekly article that is seen as a move to endorse his reform agenda, bolster his image and to justify his concentration of power.

[…] The Southern Weekly article published on Thursday emphasised Xi’s image as the authoritative head of his reform drive.

[…] The article also tried to justify Xi’s role as the head of various central leading groups, including the reform commission and the national security commission – moves that had been criticised as giving the party chief too much power.

[…] Chen Daoyin , an associate professor at Shanghai University of Political Science and Law, said that the authorities had chosen Southern Weekly, which enjoys popular readership, to send a message because Xi was seeking wider support and endorsement from ordinary people for his reform agenda, which has been met with resistance. [Source]

Not all of state media’s Xi coverage on Friday was so harmonious: four journalists at the state-run China News Service have been suspended for a typo announcing Xi’s “resignation.”