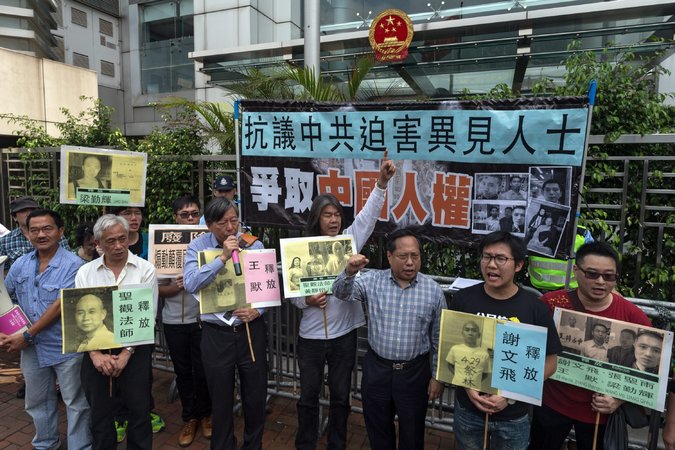 Four activists have been sentenced to jail on charges of “inciting subversion of state power” for their support of the 2014 pro-democracy protests in Hong Kong. Reuters’ Teenie Ho and James Pomfret report:

Two of them, Xie Wenfei and Wang Mo, were sentenced to four-and-a-half years by the intermediate people’s court in the city of Guangzhou after having been found guilty of “inciting subversion of state power”, their lawyer Chen Keyun told Reuters by telephone.

[…] “This does not constitute any illegal behavior. On the contrary, we think not only were they not inciting subversion to the state’s power, but they were actually safeguarding the state’s power,” said Chen. He denounced the sentence, saying the men should be free to call for universal suffrage as a fundamental right.

The pair had also openly posted messages on Twitter and Weibo criticizing the ruling Communist Party and calling for an end to one-party rule.

Two others, Zhang Rongping and Liang Qinhui, were jailed for four years and one-and-a-half years respectively on similar charges. They, too, had expressed support for Hong Kong’s Occupy movement. Their lawyers, however, weren’t reachable for comment. [Source]

The four were detained on October 3, 2014, after holding banners in support of the pro-democracy street protests in Hong Kong known as the Umbrella Movement. China Change last year translated Wang Mo’s personal defense, in which he expressed confusion over how the act of unfurling a banner equate to “inciting subversion of state power.” More from the New York Times’ Michael Forsythe and Alan Wong on the activism that led to their detention, the activists’ trial, and the political context of the Hong Kong Umbrella Movement:

Mr. Wang and Mr. Xie, who goes by the name Xie Wenfei, have been in custody since the day they unfurled their sign and were among the last to be prosecuted. Many others were released after a period of detention.

Lawyers for the men both said on Friday that they would appeal the verdicts. Another man, Liang Qinhui, was sentenced to a year and a half in prison, Mr. Wang’s lawyer, Qin Chenshou, said by telephone. […]

[…] Mr. Wang and Mr. Xie were key members of what was called the “Southern Street Movement,” a group of political activists who participated in highly visible street demonstrations, including pushing officials to disclose their families’ assets. That prominence and outspokenness may explain the harshness of their sentences, [Amnesty International’s] Mr. [William] Nee said.

[…] On Friday morning in court, Mr. Xie chanted “Abolish the one-party dictatorship” and “Build a democratic China,” his lawyer, Wang Xun, said by telephone. During his trial in November, Wang Mo declared that voicing support for democracy did not amount to a movement to subvert the Chinese state.

[…] Leaders of the movement feared that Beijing was encroaching on Hong Kong’s freedoms, especially after China’s legislature in late August of that year put strict guidelines on proposed elections for Hong Kong’s top leader that effectively gave the central government control over the nominating process.

“Their show of support encouraged us,” Mr. [Joshua] Wong said by telephone on Friday. “Even though they lived directly under authoritarian rule, they voiced their support for us and risked imprisonment.” […] [Source]

Student activist Joshua Wong was instrumental in organizing and leading the 2014 protests, and was charged along with two other movement leaders last year for unlawful assembly and inciting others to take part in the assembly. After promising that he would continue advocating for democracy and educational autonomy in Hong Kong, Wong recently announced plans to launch a new political party in the region along with fellow activists. CNN’s James Griffiths reports on the soon-to-launch political party, and on events since the 2014 Umbrella Movement that have led to increased political tension in the semi-autonomous region—including the disappearances of several Hong Kong publishers, the February Mong Kok riots, and the rise of a “localist” movement:

Joshua Wong says that his new party — Demosistō — “will demand self-determination” for Hong Kong.
“This is our most important policy,” he told CNN. “If we do not fight for self-determination the Chinese Communist Party will determine our future.”

Wong said the first goal of the new political party would be to expand its support beyond students and young people as it pressures for a referendum on the city’s future beyond 2047.

That’s when the current “one country, two systems” policy, in which Hong Kong is granted a degree of autonomy from China, is due to expire.

“Time is on our side,” Wong said. “We will prepare for the worst and continue to have an optimistic mindset.” [Source]

The choice of “Demosistō” as the party’s name has created confusion and attracted a degree of online criticism. In a Facebook post, the party explains that the name is derived from “demo,” the Greek root of “democracy,” and “sistō,” Latin for “stand.” “Demosistō, persevering towards democracy, this is precisely our theory,” the post reads. Raising awareness of the region’s future after 2047—when the “one party, two systems” agreement that allows political autonomy in the former British colony expires—is to be high on the party’s agenda. The AFP reports that British foreign secretary Philip Hammond highlighted concerns over Hong Kong’s future autonomy, stalled political reforms, and eroding rights protections in the city while there on a visit Friday:

“Although the ‘One Country, Two Systems’ model is generally working well in Hong Kong, concerns have been raised over the recent booksellers’ case,” Hammond said in a statement on Friday.

“Rule of law is the cornerstone of an open and fair society. Hong Kong’s success is underpinned by its independent judiciary and respect for rights and freedoms,” he added.

In a meeting with Hong Kong’s leader Leung Chun-ying, the British Foreign and Commonwealth Office (FCO) said that Hammond would restate “support for Hong Kong’s high degree of autonomy, rights and freedoms”, as well as commitment to the Sino-British joint declaration which protects Hong Kong’s liberties.

[…] The FCO added that Hammond would also “underline the importance of One Country, Two Systems and of restarting progress on political reform” in his meeting with Leung later Friday. […] [Source]

Hammond has faced criticism over the alleged downgrading of human rights and Hong Kong as Foreign Office priorities during his tenure.