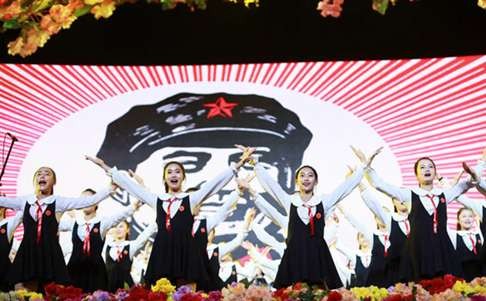 Columnist and psychologist Tang Yinghong (唐映红) has used his disciplinary expertise (often in tandem with his WeChat account) to analyze many social phenomenon in China: the mass appeal of Chai Jing’s sensitive “Under the Dome” air pollution documentary, public indifference over the recent switch to a “Two-Child Policy,” foreign fast food companies’ many scandals in China, and support for the “China model,” to name a few. Following a recent performance by patriotic girl group 56 Flowers that many found  evocative of Cultural Revolution-era propaganda, Tang has analyzed the use of young girls as a national “totem” through the academic lenses of social psychology, contemporary history, and anthropology. The analysis, originally shared on Tang’s public WeChat account, has been deleted, but is archived at CDT Chinese, and translated here in full (emphasis from the original):

Q: Why does 56 Flowers use innocent young girls as a “totem”?

A: Recently, a grand symphony concert was seen fit to be held in the 10,000-seat Great Hall of the People: “On the Field of Hope” was reported by elites within the system, attracting public attention. After the show, co-organizers the China National Opera and Dance Drama Theater and the censorship organ the Cultural Committee of Beijing’s Xicheng district sent out statements on red letterhead to deny any connection to the applicant. Setting aside system-insider “grunt bites grunt” (the word “grunt” taking the place of a stronger word) finger-pointing for the moment, for the sake of promoting main melody culture, the headlining young girls of 56 Flowers put singing the fatherland, singing the Party first, claiming to “cultivate young Chinese girls of utmost purity and innocence.” According to troupe leader, Chen Guang (陈光), “Our nation’s image is one of beauty, peace, progress, sunlight, dynamism, and progress towards the future. Is this not the image of a young girl?”

So why do they want to use innocent young girls as a totem?

From the perspective of anthropology, humanity has had a tradition of using totems to satisfy or express a kind of psychological appeal since ancient times. For example, to show a hope for the courage and strength of tigers, groups would use the “tiger” as a tribal totem. In psychologist Muzafer Sherif’s famous Robbers Cave experiment from half a century ago, boys at a summer camp were split into two groups, with each group giving themselves a totemic name: the Rattlers and the Eagles, respectively. Generally speaking, a symbolic object is used as a totem to satisfy human desires as a form of projection and self-motivation, while hopes to possess the special characteristics or qualities of the totemic symbol serve to guide the direction of one’s efforts and struggles. Therefore, a group’s totem also works as a sort of signifier–upon seeing the totemic symbol of another community one can gain a general understanding of what this community stands for. 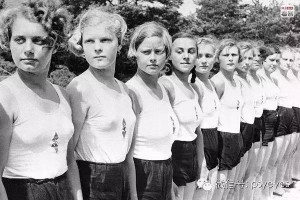 A women’s league in Nazi-era Germany. 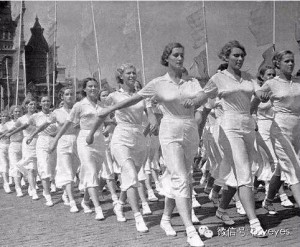 Innocent young girls as symbols from the former Soviet Union.

Fanatical supporters of the Nazis would never admit that the Reich was cruel, gloomy, in terminal decline, and at a dead end, any more than would fans of the former Soviet Union think that their favored empire was ugly, degenerate, cruel, and gloomy–even if all the signs of decay were obvious to the world at large. From a psychological perspective, this reflects the use of the psychological defense mechanism of “denial.” By using diametrically opposed characteristics to deceive not only others, but themselves as well, they conceal their own true nature, thereby misleading more and more people.

Not only that, but using the characteristics of “innocent young girls” to whitewash an essential nature of cruelty, gloominess, and being at the end of the road can seem work like the key concepts of manipulation and obfuscation from Orwell’s 1984, proclaiming “war is peace, freedom is slavery, ignorance is strength” to take the power out of harmful information meant to interfere and attack. Especially owing to people’s instinctual love for innocent young girls, by working together with special groups they can transfer this love onto the organization. In psychology, we call this positive association.