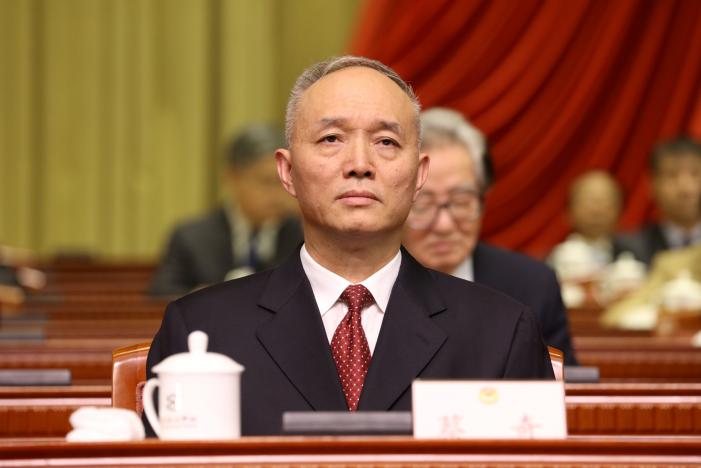 At Reuters, Benjamin Kang Lim reports that Cai Qi, a longtime ally of Xi Jinping, has been appointed party secretary of Beijing, and is expected to be promoted into the Politburo at the upcoming 19th Party Congress this autumn.

Cai is close to Chinese President Xi Jinping, sources with ties to the leadership have told Reuters, and is virtually assured a seat in the decision-making politburo during the 19th party congress in the autumn.

This is the latest move by Xi to put his allies in key positions ahead of the party congress. […] [Source]

Cai’s promotion through leadership positions has been exceptionally fast. The above Reuters report also notes that provincial and municipal Party chiefs generally serve as governors or mayors for five years before they can hope for the higher-ranking Party secretarial post. Cai was promoted to acting mayor of Beijing by Xi last October and became mayor only in January. Following his October promotion, Cai praised Xi as a brilliant leader and extolled the decision to establish his “core” status as the most important accomplishment of the the 6th Plenum meeting of the 18th Party Congress. At the South China Morning Post, Jun Mai reports on Cai’s career and the benefits his alliance with Xi appear to have offered, noting an anonymous source who cites doubt from some cadres that Cai’s political credentials qualify him for a seat in the Politburo:

Much of that success is due to one considerable factor – Cai is a long-time protégé of President Xi Jinping and spent a decade at his side in Fujian and then Zhejiang province.

[…] Cai’s career really took off in 2014, when he was promoted to general office deputy director at the National Security Commission, a body founded and chaired by Xi.

A year later, Cai was promoted to ministerial rank, and a year after that, was named Beijing’s mayor. Over the weekend he went one step higher to be named Beijing’s party secretary.

His rapid rise has caused hard feelings among other officials, according to one political source.

“Quite a number of cadres, including some at the ministerial level, are not convinced by Cai’s quick promotion,” the source said. “They don’t think Cai has what it takes.” […] [Source]

Cai is the latest of many close associates to be promoted to a top Party position ahead of the leadership transition later this year. Xi’s reshuffling has come as some commentators see his ongoing anti-corruption drive as at least partly a means to consolidate his power. The campaign has felled leaders from Party cliques which directly compete with Xi’s “Zhejiang faction,” a new CCP caucus that Xi has built with his promotions. The Economist reports on the rapidity of Xi’s replacement of ranking Party leaders, explaining how this could benefit the president within China’s system of “consultative democracy”:

Since the start of 2016 China’s president, Xi Jinping, has replaced 20 of the Communist Party’s 31 provincial secretaries, as the most powerful leaders at that level are known. He has also shuffled 27 of the provincial governorships (governors are second-in-command). For local leaders, April was the cruellest month: ten jobs changed hands. By the autumn, almost every province will have felt the effects—including Hong Kong, where a new leader was named in March. (That process, too, was hardly democratic.)

[…] So 21 of the changes were to some extent required by age, criminality or term limit (though Mr Xi presumably had some influence both over the anti-corruption charges and the promotion of governors). That leaves 25 changes which seem to have been made at Mr Xi’s discretion. Why would he want to move so many people?

The answer relates to a national party congress, which is due to be held in the second half of 2017. […]

[…] Mr Xi’s appointments in the provinces help him directly and indirectly. Almost all the party chiefs and governors will become members of the Central Committee, if they are not already. The more who owe their power to Mr Xi, the better for him. Unlike his predecessor, Mr Xi was not the head of an established political faction when he took over as general secretary in 2012, so he had to create his own. The new provincial leaders help him do that.

They also play an important role in preparations for the congress, including the choosing of more than 2,000 delegates and setting the agenda—the meeting will discuss a state-of-the-nation report by Mr Xi and adopt revisions to the party’s charter. With his provincial appointments, Mr Xi is putting in place those who can ensure that the right people attend the congress, say the right things and vote the right way. […] [Source]

At the South China Morning Post, Nectar Gan last week reported on a recent speech by Politburo member and Guangdong Party chief Hu Chunhua, highlighting the blatant shows of loyalty to Xi which could have been made to shore up his chances at being promoted to one of seven seats on the elite Politburo Standing Committee. Hu has long been tipped for a top leadership position, but in 2015 his prospects were reported to be fading. The violent suppression of resurgent protests in Wukan last year may have been driven by Hu’s earlier efforts to restore them.

Guangdong Communist Party boss Hu Chunhua made a high-profile declaration of his political loyalty in front of the provincial party congress on Monday. He repeatedly mentioned President Xi Jinping in his nearly 100-minute speech, referring to him as the party’s core and stressing the importance of concepts earlier proposed by the state leader.

Hu’s speech comes ahead of China’s major leadership reshuffle this autumn, in which he stands a strong chance of being named as one of the handful of members to the country’s top decision-making body – the Politburo Standing Committee. […] [Source]

Alongside hypotheses about Xi’s consolidation of power, speculation has been mounting that Xi could attempt to defy the conventional 10-year term limit. At The Washington Post, political scientist Juan Wang compares related concerns that Xi’s power consolidation could destabilize the CCP to her own research which suggests that Xi’s fortification would bolster the CCP’s longevity:

Because five of the seven members of the Politburo Standing Committee may retire, a reshuffling of the top leadership is expected. However, the big question is whether Xi Jinping, China’s president and CCP general secretary, will bend the informal two-term limitas general secretary and extend his stay in power. If this happens, many are concerned that it may lead to political instability.

[…] Here’s why this is a concern. First, Xi has personalized power, which means he has deinstitutionalized the CCP’s collective leadership. Second, Xi’s anti-corruption campaigns destabilized previous patronage networks. Many of the political elites and dynastic families that had held the CCP together were suddenly out of favor. Third, the Xi administration has undermined civil liberties — and this, in turn, has weakened the CCP’s legitimacy.

Instead of political instability, recent political science research suggests that Xi’s reforms are on track to repair an undisciplined CCP and strengthen China’s fragmented government. […] [Source]

For more on leadership transition and the upcoming 19th Party Congress, see prior coverage via CDT. See also a primer on the upcoming congress from the Mercator Institute for China Studies.