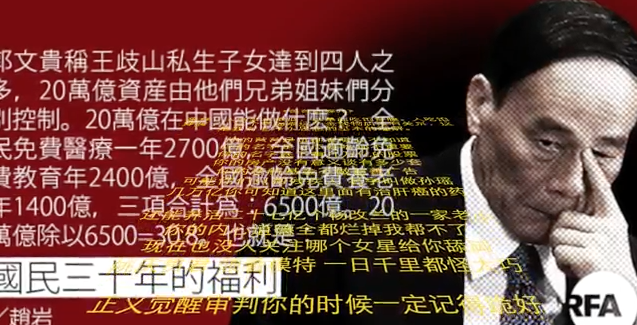 In Guo Wengui’s July 26 “All’s Well” video, the gadfly billionaire disputed the charitable nature of the Cihang Charity Foundation that was recently named as the majority shareholder of Chinese conglomerate HNA, and also claimed to have DNA evidence of 670 “illegitimate children” of Party cadres—including some of the “ultimate beneficiaries” of HNA. In the video, Guo said that Guan Jun—a man that HNA recently reported to have donated his 29 percent share in the company to the Cihang fund—was in fact the son of anti-corruption czar and Politburo Standing Committee member Wang Qishan, a man who has been referred to as the  “second most powerful person in China” after Xi Jinping. Guo also said that another HNA beneficiary, Liu Chengjie, was the son of someone “even more important” than Wang, but he wouldn’t dare name who it was in fear of “throwing China into turmoil.” Guo’s many Twitter followers began to speculate who Liu Chengjie’s father was, and the Twitter catchphrase “find daddy” (zhǎo diē 找爹) was born.

One of Guo’s followers, a student who tweets from @Dombai97 and in his spare time raps under the alias 楚三户$ANHU (the name Chu Sanhu derived from he Records of the Grand Historian), has posted a series of hip-hop tracks inspired by Guo Wengui. CDT will be translating three of these videos this week. The first video, “Where is Daddy,” can be seen with English subtitles below:

Who’s your daddy, where is he, I don’t know. Your name is Chengjie, your surname don’t matter
You’re sitting atop stocks worth several trillion RMB
Pointless to talk about your real estate / Let’s talk how many houses
Your Cihang Foundation don’t make “charity” advertising
Maybe you only help the disabled / like the one named Sun Yao
There’s sure money for that liver cancer treatment [a reference to recently deceased Nobel Peace laureate Liu Xiaobo] in those trillions
Your money can feed 270 million families like Yang Gailan’s
Your internal moral compass is broken beyond repair
No one even cares anymore about which actresses lick your feet
Yao Qing, Guan Jun
Models draped on their arms
Sex on private Boeing 787s, and yet it’s just a coincidence
When justice awakens you better not forget to kneel down
These citizens are so naïve and innocent
But you don’t think the people are worthy of you
If Mao Zedong Thought meant a thing / I’d kneel right down before Qishan
Come to the east side of Fuyou Street and claim your Chengjie
Spread your seeds to the four corners / Illegitimates everywhere / Which sect do you belong to? / The one against humanity / The lost martial art / Disown all your family / Guan Jun Sun Yao / Where are your daddies conspiring / During this robbery / Wengui the hero / Springs into the world / Started breaking the news / Their shipwreck plan / Revealed it early / Thieves plundering this nation / Wealth in the trillions / Unite yourselves, my comrades / Find Chengjie’s lost father
Each trying to cheat the other / Their power brings terror to all levels of society [civilian and government] / Darkness recedes / Rebuild justice / The plunderers turn to ashes
Some people have no fathers because of the heartlessness of bandits
No freedom for bosses and lawyers
Only for fathers of sons [/daughters]
Believing in something different a one-way ticket to jail or ruin
How many fathers hustling just to provide simple beds for their children
Scattered families / Destitute wanderers / Bury your hatred / Bear the consequences / You’ve all dug your own graves
If you’re anti-corruption / I’d be worried / Draining the national coffers / Your girl dares to plunder / the Forbidden City’s rare relics
“Serving the people” has become people rushing to serve the overlord
I speak for the people / I take up the mic / Condemn the corrupt who confuse wrong and right
Rise up like Chen Sheng and Wu Guang / Dare to cross that river / Unlike Xiang Yu / I am Chu Sanhu
China needs a real legal system / Not all vying for supremacy
[Sampling sources: Xia Zhuhai and his Red School, by VICE: Xin Haonian’s “Who is New China” Brisbane speech] [Chinese]