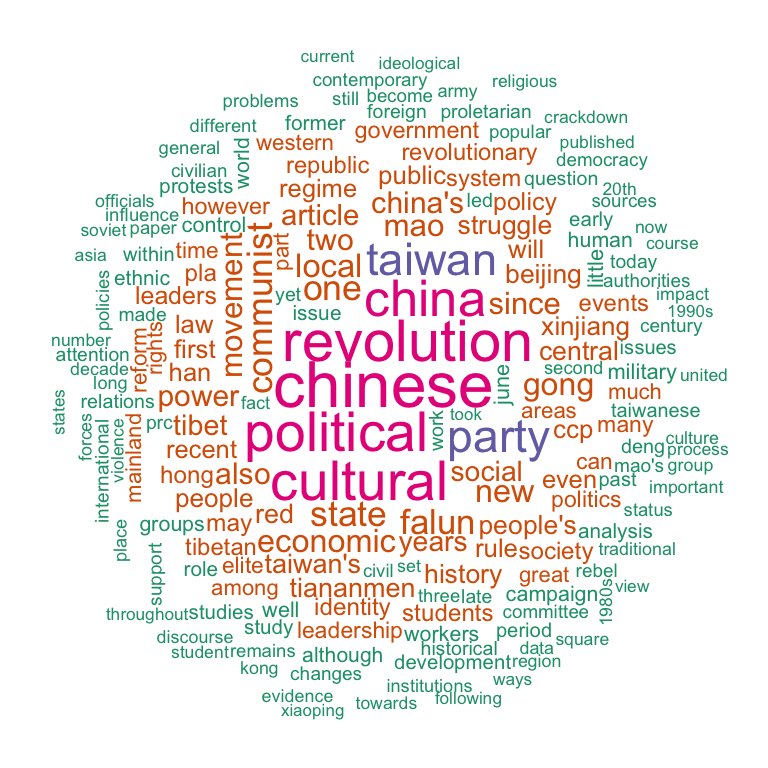 After Cambridge University Press briefly agreed to Chinese authorities’ request to remove over 300 articles from their China Quarterly journal from access by China-based users (a decision that the world’s oldest publisher swiftly reversed), the Association of Asian Studies announced that their Journal of Asian Studies, also published by CUP, had received a similar request. JAS immediately chose not to to comply with the requests, and voiced their opposition to all forms of censorship. The Association of Asian Studies has since released a full list of the 94 articles and book reviews that Chinese authorities requested to be removed from their website in China. CDT Chinese editors classified the list by topic and found that, similarly to the China Quarterly articles requested for deletion, the majority of articles targeted focused on the Cultural Revolution and Tibet: The China Quarterly list, observers noted, contained a number of baffling inclusions and omissions. Oxford DPhil candidate Xibai Xu wrote that it appeared to have been “hastily put together by people who have very little knowledge of scholarship in the field […] to locate just enough articles to make a nice, long list to impress their superiors.” Hong Kong Baptist University’s Edmund Cheng suggested that “some people were trying to get their homework done,” and “wanted to show they did something for the cybersecurity law.”

As haphazard as the requests may appear, they are consistent with a broader trend of vigorously asserting the Party’s version of history while combating the so-called “historical nihilism” that challenges it. Other aspects of this push have included the takeover of traditionally liberal journal Yanhuang Chunqiu last summer; court decisions against its former editor, Hong Zhenkuai, for questioning details of a legendary act of revolutionary heroism, and blogger Sun Jie or Zuoyeben for mocking the deaths of two other Communist martyrs; plans to make damage to “the name, likeness, reputation or glory of heroes and martyrs” a civil offense; and the imprisonment of two men for distributing books including “How The Red Sun Rose,” an uncomplimentary account of the Party’s rise to power.

CDT editors also found that “中国季刊” (China Quarterly) had become a “sensitive word” on Weibo, and was prevented from posting content with the title. “中国季刊” is also blocked from Weibo search results, but searches for “亚洲研究期刊” (Journal of Asian Studies) and “剑桥大学出版社” (Cambridge University Press) do return results as of September 5, 2017 at 20:00 PST.