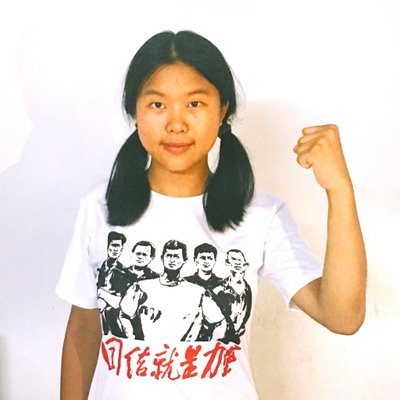 “No one can resist the tides of history. We are not a foreign force, nor a student revolution, nor do we make any other political demands. All we want is to fight for justice for the Jasic workers.”

On April 9, 2018, Yue was one of eight students who submitted a freedom of information request demanding full disclosure of an investigation into a sexual harassment, rape and subsequent suicide case that took place at PKU in the 1990s. The alleged rapist, Shen Yang (沈阳), was then a literature professor at PKU. According to recent allegations by PKU alumna Li Youyou, during his tenure, he had multiple sexual relationships with students. In particular, he consistently sexually harassed and raped his student Gao Yan 高岩—who was Li’s good friend—while tarring her reputation by telling other students she seduced him. Gao ultimately committed suicide in 1998. While a PKU internal investigation at the time absolved Shen of wrongdoing, stating that Shen was forced to be intimate with Gao because of her “mental issues,” in light of Li’s remarks, both Nanjing University and Shanghai Normal University suspended and terminated his contracts, respectively.

A few weeks later, Yue published an open letter, translated by CDT. In the letter, she described the harassment her and her family received from school authorities after she submitted the freedom of information request, especially during midnight-hour meetings, and demanded the school publish a legal explanation and apology. For instance, the school’s Office of Student Affairs had hinted to her that she might not be able to matriculate. Likewise, the School of Foreign Languages demanded that she delete all data related to the freedom of information request from her devices and promise in writing that she would cease all action. Her parents then took her home and grounded her.

Yue’s activist-minded days preceded the Shen Yang controversy—a Yunnan.cn article dated from 2015 shows Yue teaching rural students in Yunnan Province about sex education. As translated by SupChina, “Yue told us not to stay late with teachers alone. And if someone touches our private parts, we need to say a firm no.” In February, shortly before being catapulted into the public eye, she published a piece on education and privilege, which CDT has since translated. In her piece, she argues that those who share her privileged background should stand in solidarity with the less fortunate, including gōngyǒu 工友, or “worker friends.”

Since graduating from PKU in 2018, Yue has become an outspoken advocate of workers’ rights. In July, Shenzhen Jasic Technology workers who protested for better wages, working conditions, and the right to form an independent union were fired, beaten by thugs, and detained. This unleashed a wave of support from Maoists and students, including Yue. On August 19, Yue published another open letter—this time addressed to Xi Jinping and the Central Committee—stating that her and her compatriots’ goals aligned with the newly constitutionally-enshrined tenets on “Socialism with Chinese Characteristics for a New Era,” and claimed that they were not seeking to form a student revolution. Her letter has been translated by CDT. On August 24, Yue was detained in an early morning raid along with several previously detained workers and students from Beijing University, Nanjing University, and Renmin University. Her current whereabouts are unknown.