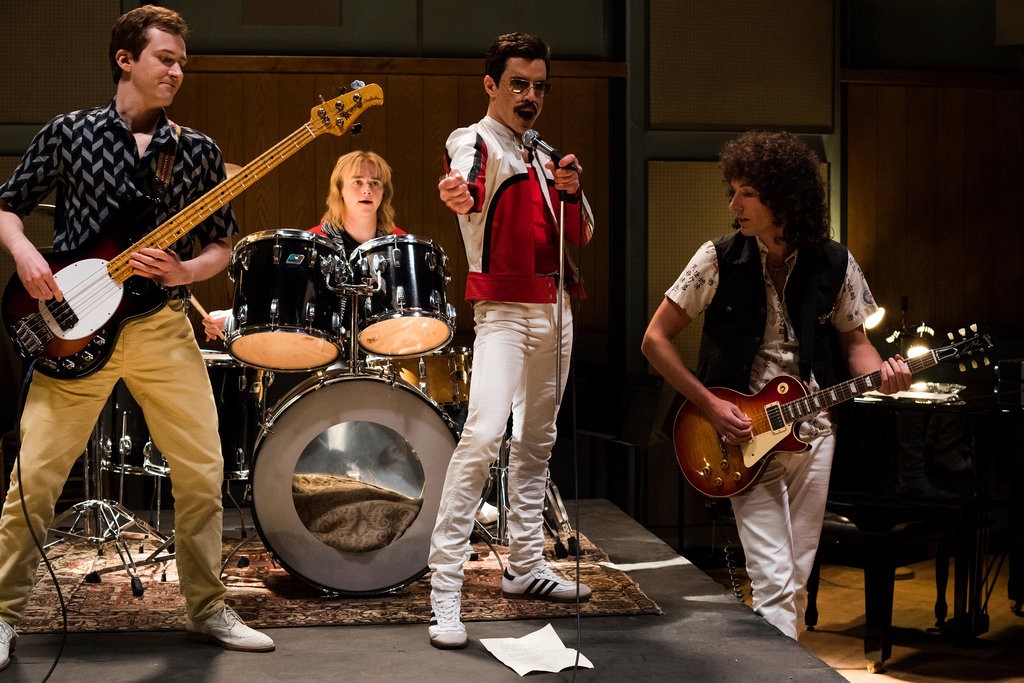 While the Queen biopic “Bohemian Rhapsody” was criticized by some Westerners for downplaying frontman Freddie Mercury’s queerness, a censored version of the film released in China last weekend completely edited out all references to LGBT sexuality and to Mercury’s AIDS-related death. At the BBC Chris Bell and Kerry Allen report:

In the Chinese version of the film, several scenes have been amended or deleted.

Explicit and implicit references to Mercury’s sexuality were edited out, including an important scene in which he comes out to his then-girlfriend.

Other scenes to be removed include a close-up of Mercury’s crotch as he performs, interactions with his male partner Jim Hutton and the entire sequence in which the character and his onscreen band-mates recreate Queen’s iconic music video for 1984 single I Want to Break Free, in which they dress in women’s clothes. […] [Source]

This censorship comes after series of moves by authorities to limit the visibility of LGBT lifestyles in Chinese media. Regulations introduced in 2016 banned all “abnormal sexual relationships or behavior” from TV broadcast. In 2017, gay dating apps Zank and Rela were shut down by authorities. Last May, Chinese broadcaster Mango TV lost rights to stream the Eurovision music contest after it censored LGBT references from a semi-final performance. The broadcaster also attracted criticism this year for censoring a reference to homosexuality by “Bohemian Rhapsody” actor Rami Malek in its Oscars coverage. Last April, Weibo imposed a ban on gay-themed content as a part of a broader “clean-up” drive. The ban was lifted after a surge of criticism from LGBT activists and supporters. While public attitudes towards LGBT issues are changing in China and activists have in recent years been challenging discrimination against the LGBT community in court, practices such as sexual orientation conversion therapy still occur.

Coverage of the “Bohemian Rhapsody” censorship from CNN’s Eduardo Baptista lists six specific scenes that were cut from the film, describes creative translations used to gloss over sensitive scenes that remained in the Chinese version, and notes that in light of the recent crackdown on LGBT, some in China see the release of the film alone as a win:

[…S]ome members of the LGBT community have called the release of “Bohemian Rhapsody” in China a victory for their community, particularly considering that only a limited number of Western films are screened in the country each year.

But Chinese documentary filmmaker and LGBT activist Fan Popo said it was “dangerous” to view the release of the film, which has has grossed $890 million at the global box office, as a win.”

If everyone becomes content with this kind of ‘victory,’ then the whole world will always submit to authority, creators won’t be respected and there will be no protection for the interests of the audience,” he said. [Source]

The New York Times’ Tiffany May and Claire Fu survey reactions from the film’s Chinese audience, which represent the growing public support for LGBT rights among China’s younger generation:

The censorship was most stark, she [26-year-old Sun Jing] said, when the Queen singer told others that he had AIDS. The dialogue was abruptly silenced at that point in the censored film, and no subtitles appeared.

“Since I’m watching a biopic, I want to see an authentic person,” Ms. Sun said. “Contents of his life should not be so inexplicably removed.”

[…] “On the topic of L.G.B.T. issues, they’ve completely misled the public,” she [22-year-old Lu Zhan] said of the censors, adding that she worried that the decision to screen a sanitized version of the film would discourage gay people in China.

[…] Yet some Chinese filmgoers said they would not watch an altered version of the film.

“On principle, I refuse to watch this type of crudely censored film,” said Li Yang, 24, a fashion writer in Beijing, who decided to avoid “Bohemian Rhapsody” after friends told him it was a choppy viewing experience. [Source]

Read more about film censorship and LGBT rights in China, via CDT.