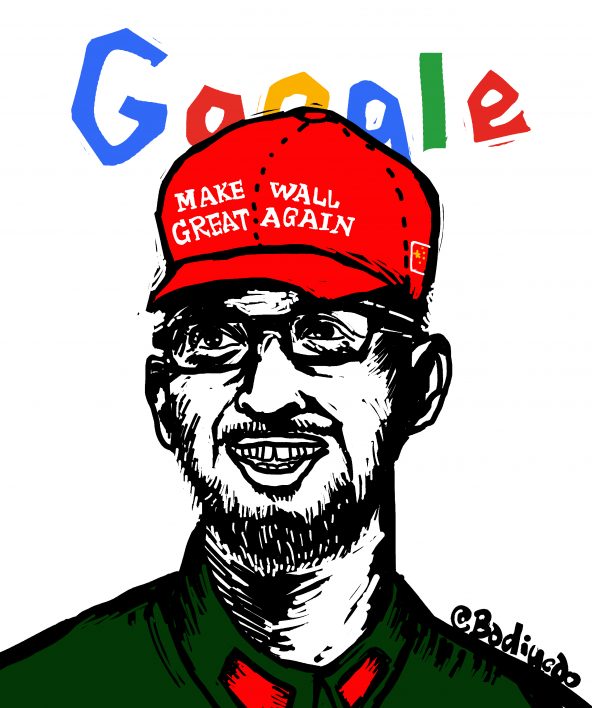 Last year, leaked plans for “Project Dragonfly,” a China-focused Google search product, triggered a fierce backlash within and beyond the company against proposed censorship and surveillance functions, and the unusual sidelining of the company’s privacy and security teams. The project was reportedly abandoned in December, but fueled lingering suspicions about Google’s plans for future engagement with China. Google CEO Sundar Pichai, who previously defended the project, told CNN on Sunday that “there are no plans for us to consider relaunching our service in China”:

In an exclusive interview with CNN’s Poppy Harlow, Pichai said Google is not actively working on a new Chinese search engine, though he acknowledged that Google isn’t about to ignore the country and its hundreds of millions of internet users.

“There are no plans for us to consider relaunching our service in China,” Pichai said. He added, “we have always looked at serving the next billion users….Our mission compass is to provide information.”

[…] Pichai said that Google would need the “right conditions” to relaunch in the country, and censorship-free internet is an “important condition” for making that decision. But he declined to share further details.

“I don’t want to speculate on a hypothetical situation,” he said. “We have no plans. And, you know, we are not spending time on it.”

[…] “We are not doing any work in China. We have a limited presence in China,” he said. That includes “limited AI,” or artificial intelligence, work through an open-source project called TensorFlow, he said. The company also does “some nonprofit work,” Pichai said. [Source]

But a resolution intended to force greater transparency around the rights impact of Google’s work in China, and to finalize the closure of Project Dragonfly, failed to pass at the company’s annual shareholder meeting on Wednesday. Google opposed the resolution, over which founders Larry Page and Sergei Brin would have wielded effective vetoes, had they been present, with their combined 51% of voting power. From Zack Whittaker at TechCrunch:

Shareholders tabled a resolution to demand Google put the brakes on its controversial search engine efforts in China. The program, internally dubbed “Dragonfly,” is said to be a censorship-friendly search engine with the capability to hide results at the behest of Beijing, which administers one of the most restrictive internets in the world.

[…] The resolution, which failed to pass during the meeting, would have instructed Google to conduct and publish a human rights impact assessment examining the impacts of a censored Google search engine in China.

It’s not immediately known what was the breakdown of the vote.

“The Chinese government already employs invasive, data-driven surveillance to track its citizens,” said Joshua Brockwell, an investment communications director at Azzad Asset Management, which supports the resolution. “The potential for it to weaponize data from Google searches could allow the government to expand its human rights abuses, including mass detentions of the Uighur minority.” [Source]

Read more on the meeting from Nitasha Tiku at Wired.

Also this week, Google appointed a new executive to oversee its Greater China operations, replacing “one of the key architects of Dragonfly.” From Bloomberg’s Shelly Banjo:

Stanley Chen will become managing director of Greater China sales, the company said Monday, taking up a post Scott Beaumont vacated after he was appointed Google’s Asia-Pacific president in March. The incoming executive, who will be based in Shanghai, had been general manager of its Taiwan business for eight years.

Google takes in about 15% of its annual revenue from the Asia Pacific even though it pulled its search engine from the world’s No. 2 economy around 2010, citing censorship. Advertising from Chinese companies however remains an important business for the internet giant. [Source]

Beyond Project Dragonfly, Google has faced other recent troubles in and involving China. In March, U.S. President Donald Trump accused Google of “helping China and their military” in apparent reference to the company’s Chinese AI research partnerships, an area that has attracted mounting scrutiny.

Last week, amid huge protests in Hong Kong against erosion of its autonomy from the mainland, Google Translate was found to be switching “sad” to “happy” in the sentence “I am sad to see Hong Kong become part of China,” possibly as a result of deliberate manipulation by some users. The incident triggered widespread alarm online, and prompted a letter from Senator Josh Hawley expressing concern that “given Google’s close relationship with Beijing and financial incentive to remain close to that authoritarian government […] Google may have been negligent in performing the due diligence that could have averted this mistranslation at a juncture where precision of message is so critical.”

Google has also been caught up in ongoing trade conflict between China and the U.S., particularly over its role as mobile OS provider to Huawei. It has responded by moving some production of internal and consumer hardware outside China, and also, according to a report by NPR’s Aarti Shahani on June 7, by “quietly assuming the role of Huawei emissary” to U.S. authorities:

The fates of Huawei and Google are intertwined. Huawei is a leader in creating next-generation wireless networks, and it’s the world’s No. 2 maker of smartphones. Google provides support for Android, the popular mobile operating system. The U.S. government ban against Huawei also blocks Google from giving security updates to millions of existing Huawei phones and from issuing Android licenses in the future. (Google is an NPR sponsor.)

In an interview this week with Huawei Chairman Liang Hua, NPR asked him how his company would resolve the problem of losing access to Google software.

[…] “We really hope that there are possible remedies coming out of the communication between Google and the Commerce Department,” he said. “We think that it is in the benefit of the consumers if they could work out a solution.”

[…] In an email, a Google spokesperson said: “Like other U.S. companies, we’re engaging with the Department of Commerce to ensure we’re in full compliance with its requirements and temporary license. Our focus is protecting the security of Google users on the millions of existing Huawei handsets in the U.S. and around the world today and going forward.”

The company declined to say whether its talks with the government have included directly or indirectly advocating for the ability to support future Huawei devices. [Source]