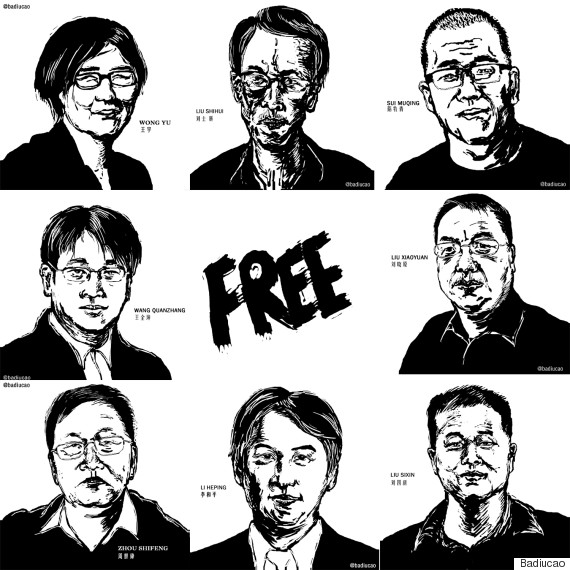 This week marks the four year anniversary of the 709 “Black Friday” crackdown on human rights lawyers in China. Over 300 lawyers, law firm staff, and human rights activists were detained and interrogated beginning in July 2015 in a nationwide “war on law.”  A number of individuals were formally charged in the months following the crackdown and several others were paraded on state television making alleged confessions. Some also endured mental and physical torture while in detention. Although the majority of those in custody have now been released, some including Li Yuhan and Chen Jiahong remain in criminal detention, while Wang Quanzhang is serving four and a half years in prison for subversion after being held incommunicado for more than 1000 days.

Four years on, China’s human rights lawyers continue to face government repression as authorities turn to administrative measures to prevent these attorneys from practicing law. Those who have been freed are subject to various professional disciplinary punishments. Many have had their licenses canceled or revoked. In response to this development, three human rights groups–China Human Rights Lawyers Concern Group (CHRLCG), Chinese Human Rights Defenders (CHRD), and the International Service for Human Rights (ISHR)–have recently submitted a joint analysis to U.N. human rights experts condemning legislative measures used to restrict the rights of lawyers. Gao Feng at Radio Free Asia reports:

Four years after the ruling Chinese Communist Party launched a nationwide crackdown on the country’s human rights lawyers, the country’s rights attorneys say they are now being prevented from practicing law at all.

[…] Xie, who was subjected to abuse including deprivation of food and water, and tortured again after being moved to the police-run Changsha No. 2 Detention Center following his formal arrest on Jan. 9, 2016, said the crackdown has largely achieved what the authorities set out to do.

“The terror campaign waged against rights lawyers was clearly pretty effective, because now the majority of of [human rights] cases can’t find an appropriate lawyer to represent them,” he said.

“The vast majority of lawyers have been controlled via the system of annual license renewals and other methods.” [Source]

The Hong Kong-based China Human Rights Lawyers Concern Group is commemorating the crackdown with a silent standing protest and calls for the release of the remaining detainees. From Taiwan News:

[…] The group maintains that despite the last “709” victim having already been sentenced, the suppression of lawyers and activists is far from over, and has in fact intensified.

One victim whose story was highlighted was human rights lawyer Wang Quanzhang (王全璋). He was arrested in August 2015 and held incommunicado for three years before his trial in 2018. He was later sentenced to four and a half years in prison for subverting state power.

The China Human Rights Lawyers Concern Group released a statement demanding the release of several lawyers and civil rights activists including Wang. They also called for lawyer Jiang Tianyong’s (江天勇) personal freedom to be respected and for an end to the suppression of all human rights lawyers and activists in China. [Source]

In their statement on the anniversary, China Human Rights Lawyers Group writes that the activism of the persecuted human rights lawyers is inspiring the next generation of rights lawyers to continue advancing their cause despite intensifying oppression. From China Change:

Family members of the detained lawyers have also refused to give up hope. Li Wenzu, wife of rights lawyer Wang Quanzhang, has fought continuously for her husband’s release these past four years. At one point, she walked 60-mile from Beijing to Tianjin to seek information on her husband. Li and her son were finally allowed to see Wang for the first time last month. Doriane Lau at The Diplomat recounts her efforts to protect her family:

Li says she used to live an “ordinary” life – she was a stay-at-home mom, taking care of the home she built with Wang and raising their son, Quanquan.

“Although my husband is a lawyer, I did not pay much attention to human rights-related issues. But now my husband is persecuted by the authorities,” she says. “I cannot give up on my family.”

Since 2016, she and other family members of detained lawyers have used different tactics to stand up for her husband and other detainees. At the beginning, these actions were creative and humorous. They made satirical videos, held eye-catching red buckets outside the detention center to catch media attention, and wrote their husbands’ names on their outfits. When they realized the authorities were completely nonresponsive, they took bolder actions. Li Wenzu, together with Wang Qiaoling, Liu Ermin, and Yuan Shanshan, shaved their heads in the cold winter of 2018 to complain about the inaction of the prosecutors and the court.

“I am grateful that I am connected with the wives of other human rights lawyers and activists who were also persecuted,” says Li. “We met each other because of the lawyers crackdown. We faced similar challenges and had a common goal. We felt desperate when legal remedies were not available and our husbands had not returned home. However, we would encourage each other no matter what happened. We supported each other. Together, we thought about what we should do to make changes.

“Now that the others’ husbands have come home, they are still fighting for my husband’s freedom along with me.” [Source]