The United States-led “Summit for Democracy”, which kicked off on December 8, is designed to reverse the trend of global democratic “backsliding.” It touched a nerve in China, triggering a wave of state- and Party-directed propaganda about “whole-process people’s democracy,” a supposedly superior form of Party-led deliberative governance unique to China. Screenshots compiled by CDT Chinese reveal that the domestic propaganda push extolling democracy involved the mass silencing of critical voices. In the following short post, CDT English has translated and organized the images into three sections: state media censorship on Weibo, social media censorship on Zhihu, and a trio of tongue-in-cheek screenshots that circulated widely within China after the propaganda push began.

Weibo employs dozens of techniques to censor conversations, many of which are far more sophisticated than the deletion of offending posts. “Comment gobbling,” whereby comments containing sensitive words are not displayed, is one method commonly employed to both hide sensitive responses and create the perception that a post has been well received. After People’s Daily, CCTV, and Xinhua issued Weibo posts celebrating “people’s democracy,” they all used different forms of Weibo censorship to limit dissenting voices:

A post on People’s Daily’s Weibo account trumpeting “People’s Democracy,” “Chinese Democracy,” “the people in charge,” and “Sunbeams of Democracy” reveals a locked comment section. None of the 540 comments are displayed.

A CCTV Weibo post claimed, “Whether a country is democratic or not should be judged by the people of that nation,” but the comment section was heavily filtered. Only 10 comments out of 1163 were displayed, and all were anodyne statements of support. 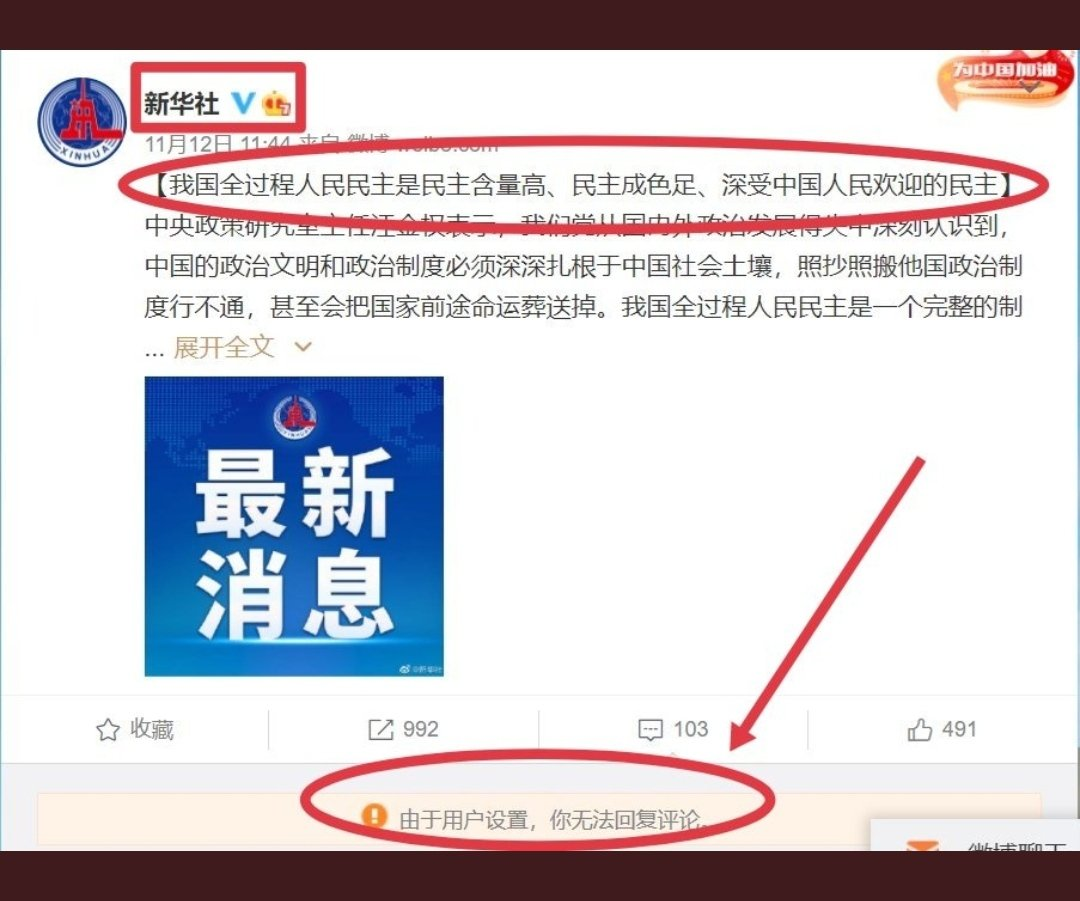 On Zhihu, a popular social media site roughly akin to Reddit or Yahoo Answers, users responded to a question about the new white paper, “China: Democracy That Works.” Many found their answers censored for “violating community rules.” The answers translated below vary in their apparent tone—but even a hint of insincere support can be enough to trigger censorship: 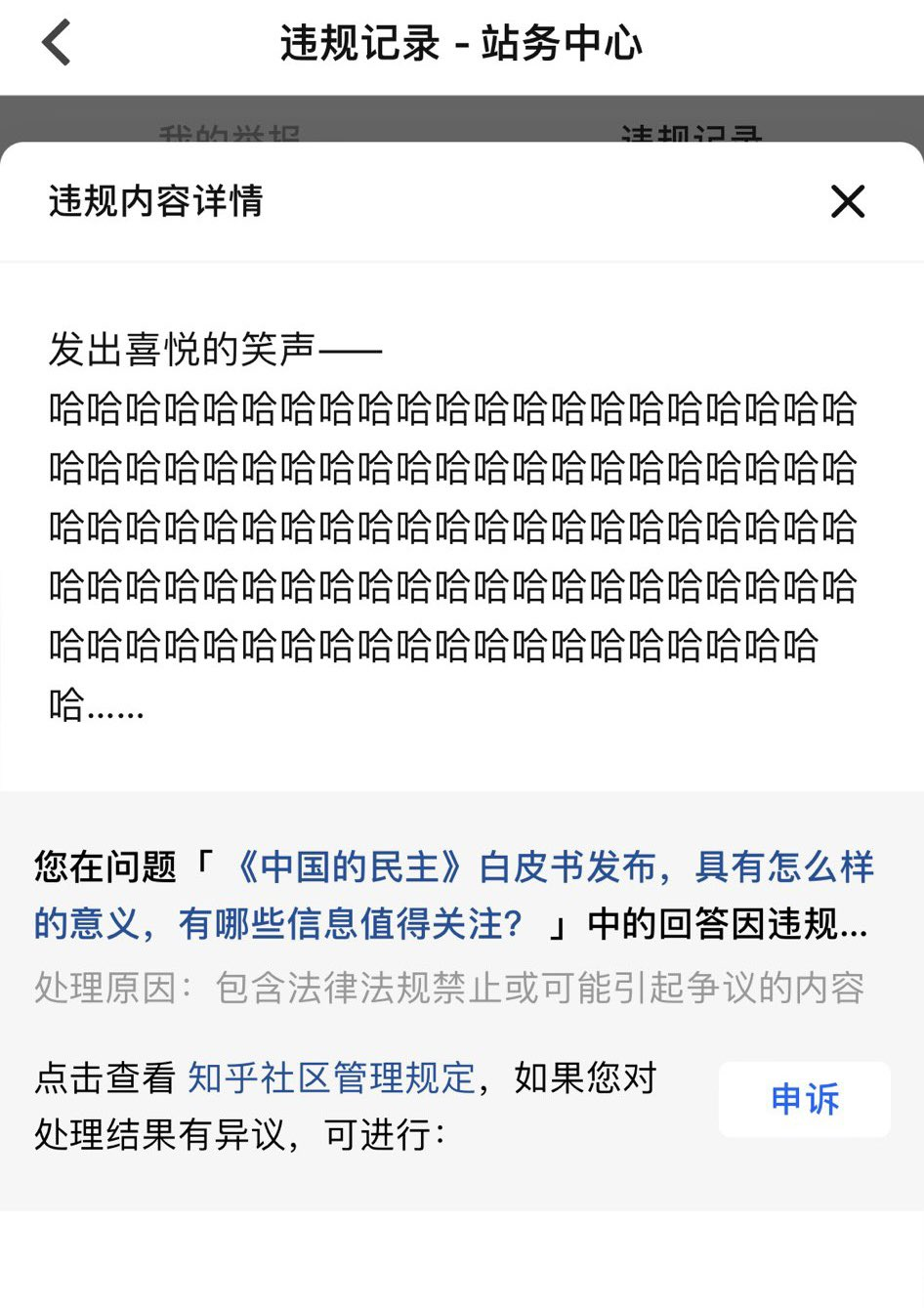 Another blocked comment was simply a popular gif of a man clapping enthusiastically and saying, “Good!”

The entire Zhihu comments section was eventually “harmonized.” Every comment was replaced by a notice reading, “This comment is not being displayed.”

Netizens also circulated three screenshots showcasing China’s flimsy claim to democracy. The three images—an interview with a famous nationalist professor, a text message from a telecom company, and a vote-tally at the 13th National People’s Congress—appear to belie the government’s claim to a “whole-process people’s democracy”: 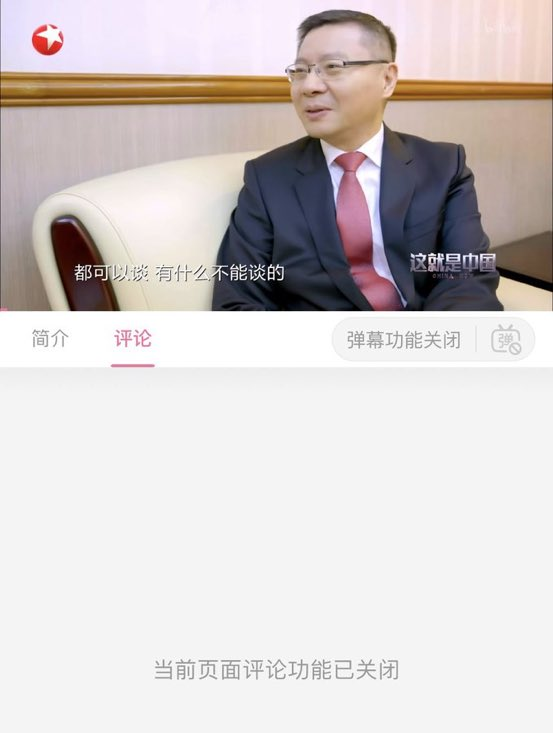 Netizens circulated this screenshot of a Bilibili clip featuring nationalist commentator Zhang Weiwei saying, “Everything can be discussed. There’s nothing off-limits.” The screenshot also clearly shows that comments for the video have been disabled; a message informs the user: “This page’s comment function has been disabled.” 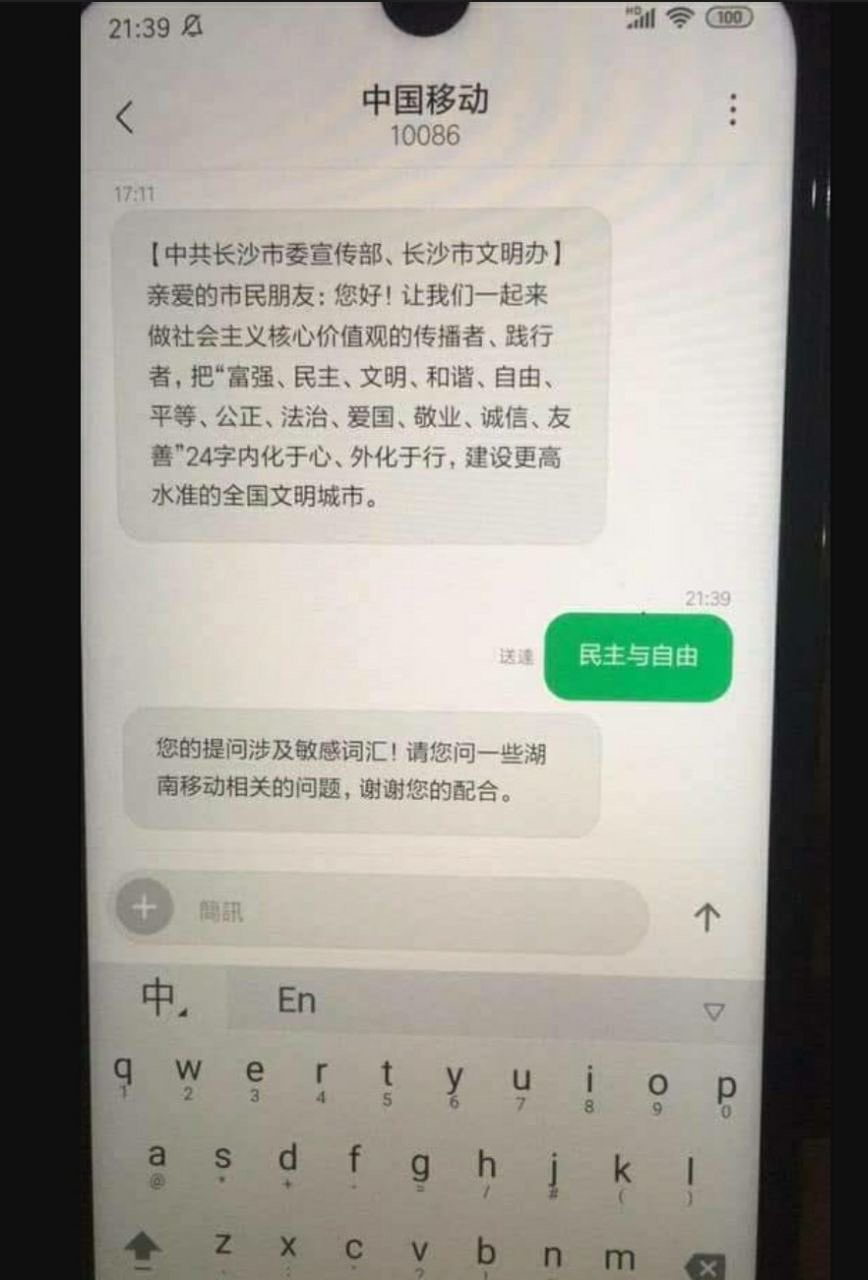 Another screenshot that circulated widely was a notification from China Mobile promoting Changsha’s campaign to promote the Core Socialist Values of prosperity, democracy, civility, harmony, freedom, equality, justice, rule of law, patriotism, dedication, integrity, and friendship. The text recipient responded with “democracy and freedom,” two of the 12 values, only to be warned that his response included sensitive words. 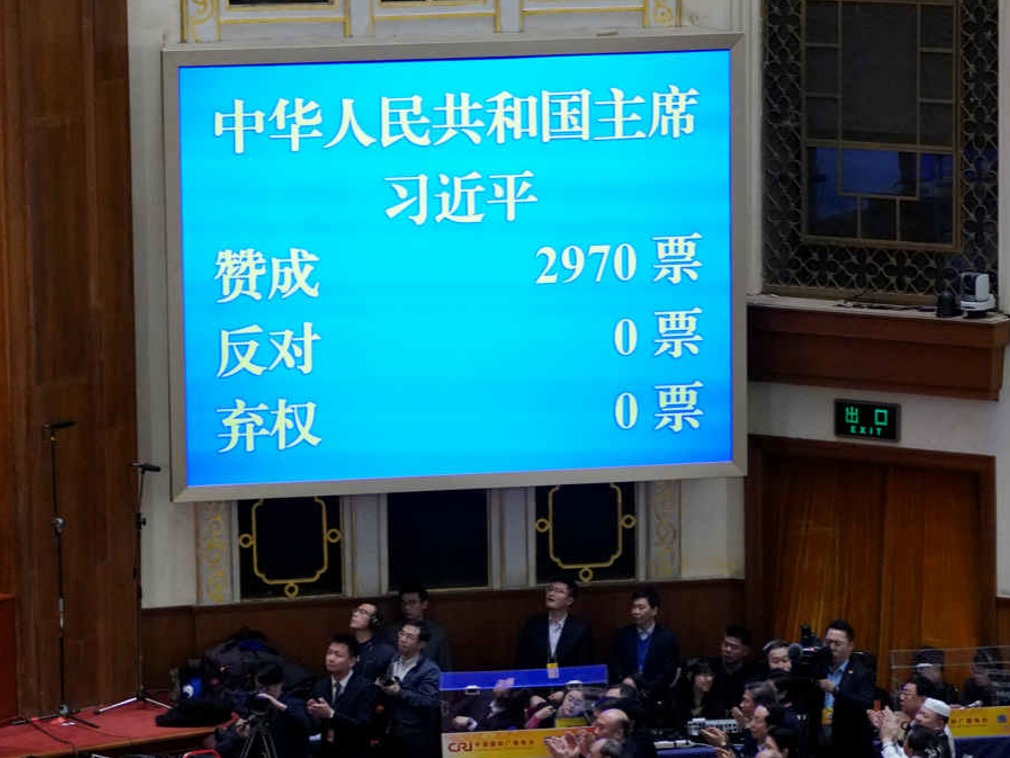 A third viral screenshot focuses on a big-screen vote-tally board at the 13th National People’s Congress, held in 2018. The screen shows that Xi Jinping won 2970 votes in a rubber-stamp election to serve as President of the People’s Republic of China, and that there was not a single abstention or vote against him (although 10 representatives were absent for the vote.)