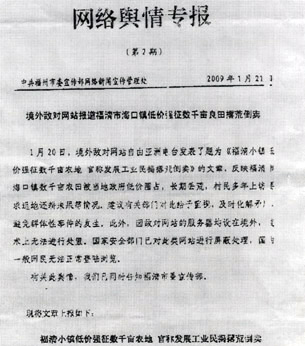 This is an exclusive report from the Radio Free Asia:

Authorities in the southeastern Chinese city of Fuzhou have warned local officials to take measures to prevent “mass incidents” over a land dispute, as the global economic crisis sparks government fears over growing social unrest.

In a document issued by the Chinese Communist Party propaganda department of Fuzhou city and obtained by RFA, the government warned officials in Fuqing city, lower down the chain of command, to beware of fallout.

“We recommend that the relevant departments take this very seriously and take immediate steps to ensure that no mass incidents take place,” the document, titled “Special Report on Web Opinion” and signed by the “Web news management division,” said.

Dated Jan. 21 and seen Thursday, the communique was sparked by a Jan. 20 report by RFA’s Mandarin service, which covered a dispute between villagers around Haikou township, near Fuqing, and local officials, over compensation for farmland lost to development.