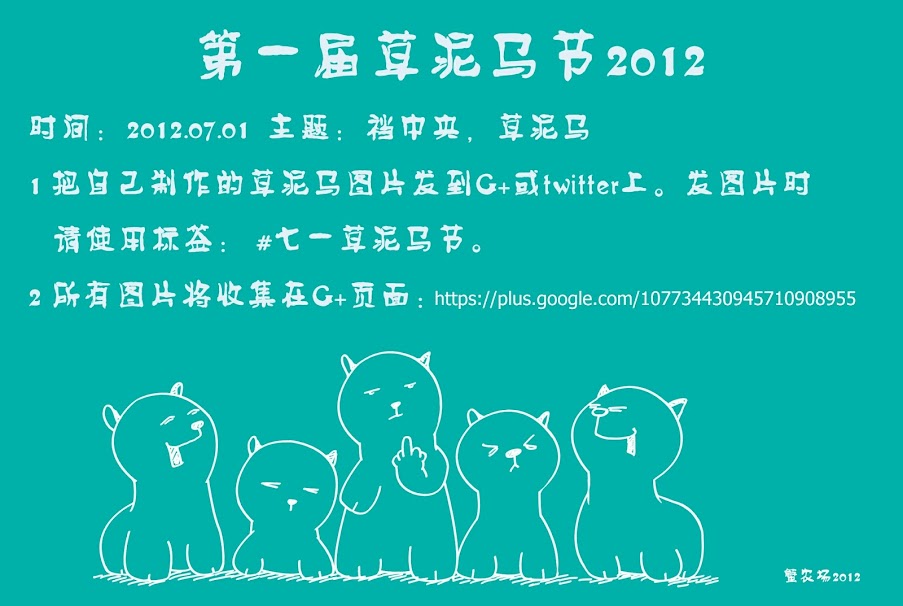 In honor of the “glorious holiday of the nation of the Mahler Gobi,” i.e. the anniversary of the founding of the Chinese Communist Party, cartoonist Crazy Crab held the first annual Grass-Mud Horse Festival July 1 on Google+ and Twitter. CDT has selected its favorite contributions. You can view the entire Google+ album here.

Altar to President Hu Jintao the grass-mud horse. The character over the frame is “grass” (草 cǎo), which sounds similar to “f**k” (肏 cào). Playing on CCP slogans, the pillar to the right of Hu says “ten thousand taxes for the Chinese people” (中华人民万税 Zhōnghuá rénmín wàn shuì) instead of “long live the Chinese people” (中华人民万岁 Zhōnghuá rénmín wàn suì). The left pillar reads “Hu Jintao forever” (胡锦涛千古 Hú Jǐntāo qiāngǔ), implying that this is a shrine to the dead.

The CCP Politburo Standing Committee as cuddly alpacas on July 1 (7.1), the anniversary of the founding of the Party.

Ai Weiwei as a grass-mud horse.