Not even one month into the new year, many China observers have already called the protests at Southern Weekly this past week the story of 2013. The public show of resistance to egregious censorship has unfolded on a scale unseen in China for over 20 years. Despite efforts to squelch online discussion, the Southern Weekly’s struggle for editorial freedom was a blazing hot topic on Weibo, and an inspiration to cartoonists, over the past few days. 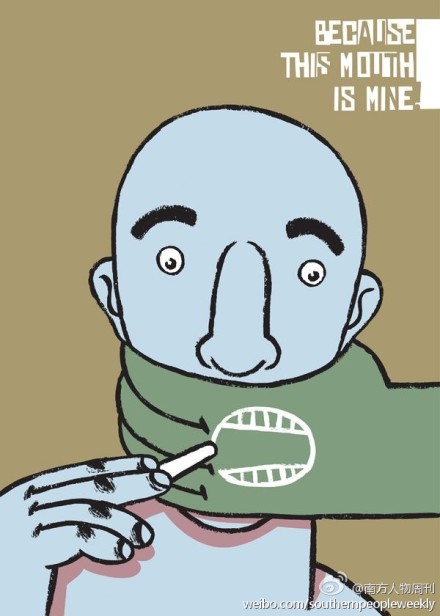 One of the most shared images on Weibo this week, this image was posted by Southern People Weekly, a sister publication of Southern Weekly in the Nanfang Media Group. (Artists unnamed) 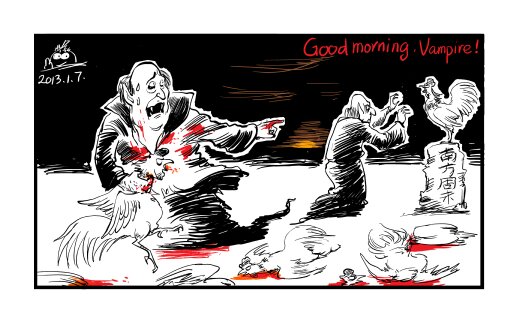 A proud rooster, defying his encroaching enemy, stands tall on a rock inscribed with the words “Southern Weekly.” Artist Rebel Pepper explains his cartoon [zh]: “The vampires hopelessly strangle one rooster after another, just to stave off the coming of the dawn.” This cartoon draws inspiration from the investigative work of Shen Yachuan, who made his name uncovering the assassination of a whistle-blowing schoolteacher. On the 10-year anniversary of Shen’s triumph [zh] last April, @ShenzhenLaocui said, “Even if you kill every last rooster, the sun will still rise!” (Artist: Rebel Pepper)

Many Southern Weekly staff pointed their fingers at Tuo Zhen, the new propaganda chief of Guangdong Province, for writing the reviled New Year’s message which replaced the original. To skirt the censors, netizens have referred to Tuo as a “lump” (坨 tuó), which is also the measure word for excrement. Scatological cartoons lampooning the censors’ treatment of Southern Weekly abound. (Artist: Pearl Forest)

A one-tuo note from the Proppy Bank of China. “Lump” Zhen is now a stand-in for the propaganda and censorship apparatus generally. (Artist: Rebel Pepper) 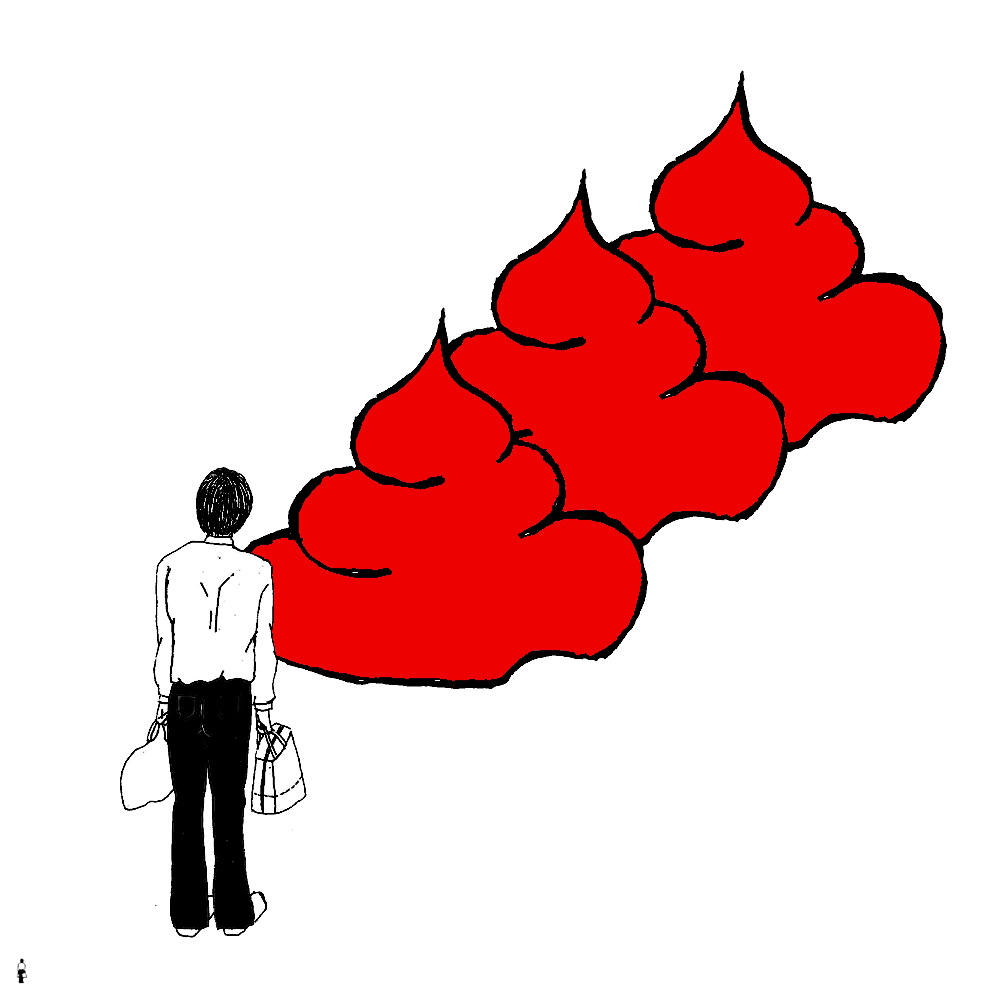 Posted to AmazeNews with the title “Say No to Shit,” Tank Man faces down an advancing line of government turds. The cartoonist adds the subtitle, “Support the Southern Weekly editorial protest.” (Artist: Badiucao) 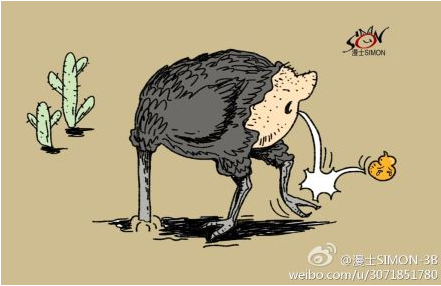 Tuo has also been condemned online as an “ostrich” (驼鸟 tuóniǎo) for his conspicuous silence during the protests. (Artist: Simon)

These “news trimming rulers” are yet another reference Tuo Zhen. Netizens have “spelled” out components of Tuo’s surname with the characters for “measure.” As the “Minister of Measure,” Tuo appears to have taken a personal role in demarcating the limits of the printed word. (Artist: Mr. Choo Choo 500) 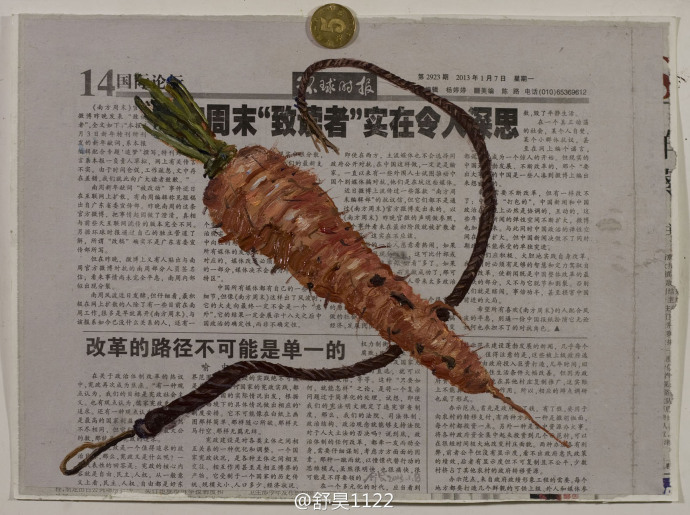 A carrot and whip are placed strategically on top of the editorial page of the January 7th edition of the Global Times. The top headline, “Southern Weekly’s ‘Message to Readers’ Is Food for Thought Indeed,” claims that the Guangdong Propaganda Department did not write the New Year’s greeting run in place of the original, and that loosely connected, outside forces, including Chen Guangcheng, have stirred up controversy through the Internet. All news media were mandated to carry this editorial. Beijing News refused at first, thus drawing it into the fray. The 50-cent coin above the whip is a jab at the authors of the Global Times apologia. (Artist: Shu Hao)

The censors and the press are personified as abusive boyfriend and female victim. “I rape, you resist! You must be seeing someone else…” (Artist: Dashix) 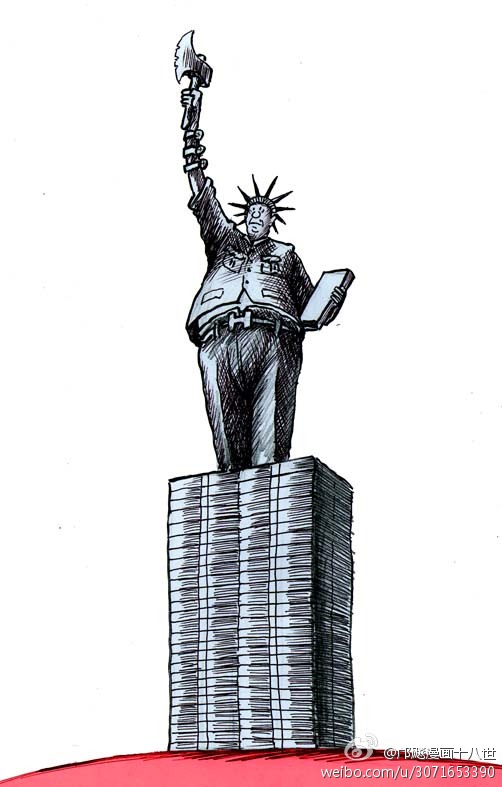 Press freedom with Chinese characteristics: a bureaucrat, feigning adherence to liberty and the law, holds the axe ready over the stack of newspapers which are his platform. He seems oblivious to the odd fashion choice of three watches and a Hermès belt with a Lady Liberty crown. (Artist: Kuang Biao)