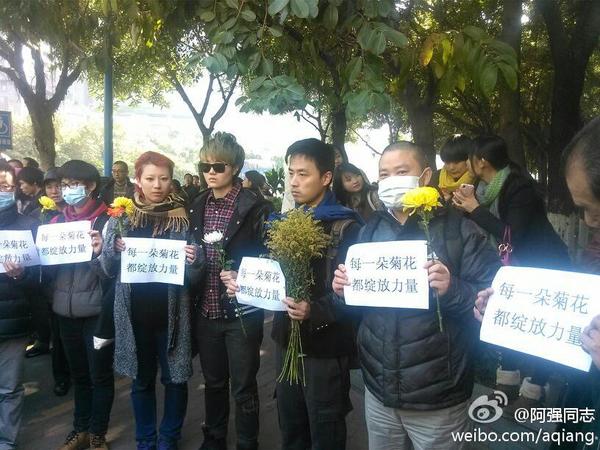 As of January 7, the following search terms are blocked on Sina Weibo (not including the “search for user” function). 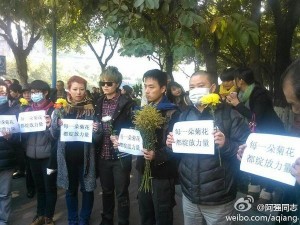 “With every flower, blossoms power.”

– 289: Protesters gathered outside Nanfang Media Group’s headquarters at 289 Guangzhou Avenue today.
– Guangzhou Avenue (广州大道)
– press office (报社)
– present flowers (献花): Protesters have been leaving chrysanthemums (a flower of mourning and honor) and jasmine (perhaps an allusion to calls for a “jasmine revolution” in 2011) in front of Nanfang Media’s press offices. Beijingers left flowers for Google when it closed its mainland China operation in 2010.
– NF: Abbreviation for “Nanfang” (南方), meaning “southern.”
– nanzhou: Abbreviation for “Nan Zhou” (南周), as in “Nanfang Zhoumo” (南方周末), “Southern Weekly.”
– southern + weekend: Although its official English title is “Southern Weekly,” “Zhoumo” (周末) literally means “weekend.”
– joint statement (共同声明): Southern Weekly staff issued a joint statement [zh] on its official Weibo account after it was seized by authorities to apologize for the factual errors in the introduction added to their New Year’s message.
– freedom of the press (新闻自由)
– press prohibition (报禁)