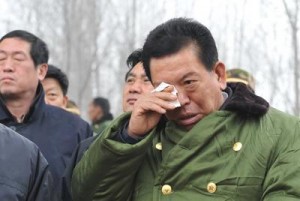 Central Propaganda Department: With regards to State Administration of Work Safety Vice Director Wang Dexue crying during his inspection of the collapse of the Lianluo Highway Yichang Bridge, do not sensationalize the story. (February 4, 2013)
中宣部：对国家安监局副局长王德学视察连霍高速义昌大桥垮塌事故现场时流泪一事，不炒作。

The February 4 crash in Henan Province left ten dead and 11 injured. The local government states that it will compensate victims and their families according to “Henan standard,” which differs according to household registration (hukou): over RMB400,000 for urban hukou holders, but only up to RMB180,000 for rural hukou [zh].

“According to the relevant laws and regulations, search results for ‘New Watch Brother’ cannot be displayed.”