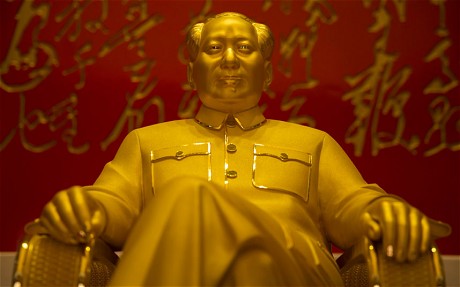 December 26th marked the 120th anniversary of Mao Zedong’s birth, and celebratory preparations caused much unease in the CCP. Earlier this month, amid an ongoing Party frugality campaign, a $16.5 million bejeweled golden statue of Mao was unveiled. Meanwhile, central authorities lowered the profile of a planned birthday gala by changing its name and merging it with a New Years ceremony. A report from Reuters earlier this week put official ambivalence about Mao Zedong’s birthday celebration—and Maoism—into context:

Mao has become a potent symbol for leftists within the ruling Communist Party who feel that three decades of market-based reform have gone too far, creating social inequalities like a yawning rich-poor gap and pervasive corruption.

In venerating Mao, they sometimes seek to put pressure on the current leadership and its market-oriented policies while managing to avoid expressing open dissent.

[…] China last month unwrapped its boldest set of economic and social reforms in nearly three decades, relaxing its one-child policy and further freeing up markets in order to put the world’s second-largest economy on a more stable footing.

Still, Xi and his team gave themselves until 2020 to achieve “decisive” results – a tacit acknowledgement of the difficulty of the task when the state-run sector championed during Mao’s heyday remains strong and when many are unhappy with growing social problems bought by the party’s economic reforms.

“The celebrations have to be grand or people will not be happy,” said another source, who has ties to the party’s traditional leftists.

Divisive indeed, among both the public and the political elite. As Chinese history scholar Jeremiah Jenne explained in a recent blogpost, “If you ask ten people at random from throughout China their opinion on Mao Zedong, you’re likely to get ten different answers.” Esteemed by the CCP as the central legitimizing figure for their continued rule, his ideological legacy is as much at odds with the contemporary Party’s dedication to deepening economic reform as it is akin to recent crackdowns on dissent. A report from the Global Times reconciles seeming contradictions by tracing Mao’s legacy through years of reform to explain it as the ideological “foundation of Chinese rejuvenation”:

After Mao, China’s ruling party has developed his ideology into a profoundly practical system of socialist theories with Chinese characteristics. This political and ideological evolution is even praised around the whole world.

The success of reform and opening-up is built on Mao’s legacy, which supplies a broad framework in terms of politics, economy and social management. The following leaderships of China have inherited many critical principles from Mao’s generation, such as the spirit of independence and self-reliance. They have also tried to keep pace with the times, and have changed many outdated mindsets from Mao’s time.

It should be pointed out that Mao made numerous explorations to blaze the trail for the development of Chinese socialism. The mistakes that he made are the results of historic limitations. They cannot be wholly imputed to Mao alone. The responsibility should be taken by the entire nation. China surely needs to reflect on that age, but for the purpose of drawing lessons instead of cooking up charges. [Source]

While some from China’s younger generation are beginning to question the continually toted [zh] Party line used to reconcile disastrous faults in some of the late Chairman’s landmark policies—that Mao was 70% right and 30% wrong—the Global Times recently reported that an overwhelming majority of survey respondents consider Mao’s merits to outweigh his faults:

The survey, conducted by the Global Times Global Poll Center through telephone interviews and online polls on Monday and Tuesday, interviewed 1,045 respondents aged over 18 in Beijing, Shanghai, Guangzhou, Chengdu, Xi’an, Changsha and Shenyang.

[…] In a multiple choice poll, nearly 90 percent of respondents believe the greatest merit of Mao, who was born 120 years ago on Thursday, is founding an independent nation through revolution, while nearly 60 percent admire him for advocating the idea of serving the people and spreading the notion of fairness.

“Fairness being the second most popular of Mao’s merits makes sense as it’s part of the reason that people miss the Mao era, because the wealth gap was not as big as now,” said Zhao Zhikui, a research fellow at the Academy of Marxism under the Chinese Academy of Social Sciences, noting that it should be an alert to the authorities. [Source]

Elsewhere in state media, the central leadership’s continued veneration of Mao was highlighted. After visiting the Great Helmsman’s remains, the CCP Central Committee held a symposium at the Great Hall of the People. Xinhua reports:

The Communist Party of China (CPC) Central Committee on Thursday held a symposium commemorating the 120th anniversary of the birth of Mao Zedong.

The symposium, at the Great Hall of People on Thursday morning was presided over by Liu Yunshan and attended by Chinese president Xi Jinping, and other leaders including Li Keqiang, Zhang Dejiang, Yu Zhengsheng, Wang Qishan and Zhang Gaoli. [Source]

Another report from Xinhua notes that, while Xi Jinping “held high the banner of Mao” at the Beijing symposium, he was also intent on warning against blind worship of the late leader:

Xi also hailed Mao as “a great patriot and national hero” and the core of the first generation of the Chinese leadership.

“Mao is a great figure who changed the face of the nation and led the Chinese people to a new destiny,” said Xi, also general secretary of the CPC Central Committee and chairman of the Central Military Commission.

He pointed out that a correct historical view must be adopted to appraise a historical figure.

“Revolutionary leaders are not gods, but human beings,” Xi said.

“(We) cannot worship them like gods or refuse to allow people to point out and correct their errors just because they are great; neither can we totally repudiate them and erase their historical feats just because they made mistakes,” Xi said. [Source]

While President Xi’s warning against worshipping revolutionary leaders like gods was delivered by Xinhua, a separate report from the state press agency noted Mao’s place in a Buddhist shrine in Yunnan. Meanwhile,  thousands gathered in Mao’s hometown of Shaoshan to make offerings and bow before his golden image. From the AFP:

Thousands of admirers of Communist China’s founder Mao Zedong flocked to his home town Wednesday to bow before his graven image — including one statue of solid gold — before his 120th birth anniversary.

Pilgrims from across the country lit firecrackers and offered flowers in Shaoshan, where Mao was born 120 years ago Thursday, to celebrate a man blamed for tens of millions of deaths but widely viewed as the father of modern China.

“He is a great leader who sacrificed his interests so we could be liberated,” said retired teacher Fu Mengnan, after prostrating herself on the ground in front of a giant bronze statue of the leader.

“I have an image of Chairman Mao at home, and bow in front of it every morning and evening,” the 56-year-old added. “I think he is a Buddha, and I am wishing him happy birthday to show that I’ll never forget him.” [Source]

Recently, Internet censors ordered the deletion of a Phoenix Net article that included discussion of the supernal qualities of Chairman Mao photos. At The Telegraph, Malcolm Moore has more on the Shaoshan celebration, how it ran counter to central government wishes, and on the government’s online surveillance of rising Pro-Mao sentiment in an increasingly unequal society:

“Xi Jinping (the president) himself told the leaders here in Shaoshan there should be no gala, no singing, no dancing and no big events,” said one employee at a tourist concession.

But the villagers, and the busloads of Maoists flocking to Shaoshan, many of them accessorising their designer clothes and iPhones with green revolutionary army caps, are finding it difficult to contain their enthusiasm.

[…] The managers of the hall [where the golden Mao statue is on display] thoughtfully placed three cushions on the floor, embroidered with lotus flowers, for people to fall to their knees.

[…T]he depth of feeling stirred up by the anniversary is enough to concern the authorities, who have been monitoring internet chat rooms used by Maoists and tapping their mobile phones.

“All of our phones are being monitored,” said Tang Jinbo, a 53-year-old former worker in a pharmaceutical firm who is one of a group of hundreds of Mao supporters that travelled to Shaoshan.

[…] “In the first 30 years of Mao, there was free education, free healthcare, housing and everyone had a job. Since the reform period came, the income gap has only widened,” she said. [Source]

Xinhua’s coverage of the celebratory mood in Mao’s hometown chose to focus not on golden statues or widening inequality, but on the ten-year-running offer of a free, simple meal in Shaoshan, and on the happiness that can be found in the pilgrimage to Hunan:

A plain open banquet of longevity noodles and small spicy fish warmed admirers in Mao’s home village on the 120th anniversary of his birth on Thursday.

“There’s food for free and I felt a warmth here with a family embrace in Mao’s hometown. Shaoshan touches our generation in its special way,” said Fan Huiling, a 49-year-old woman who has been anticipating a trip to Shaoshan for a long time.

On the eve of her retirement, Fan finally set foot in the small village to realize her lifelong dream of a “personal visit to the birthplace of the great man.” [Source]

In a final note of contradiction on Mao’s birthday, The Telegraph reports from Shanghai. A sign of just how much has changed in the post-Mao years, a Shanghai building that briefly served as Mao’s residence will soon be the centerpiece of an upscale shopping district:

It was also at this time that Mao began associating with Chen Duxiu, a teacher and revolutionary who would go on to found the Chinese Communist Party in Shanghai in 1921.

However, 93 years after Mao moved out, his former home has been swallowed up by the Jing An Kerry Centre, a gleaming shopping and entertainment complex that describes itself not as cradle not of Communism but of “cosmopolitan chic”.

[…] When China’s future leader lived here, he and five colleagues paid around 250 yuan (£25) a month for their cramped home, said Dr Zhang, who developers commissioned to research the building’s little known history.

[…] Dr Zhang, the historian, conceded the area’s transformation into a hotbed of consumerism would have Mao turning in his grave.

“The house is a symbol, a temple to Mao, and now it is surrounded by capitalist power. [It is] very strange,” he said. “Mao lived his life as a revolutionary leader, he would never have expected this to happen.” [Source]

Also see a photo gallery of Mao impersonators annotated by Offbeat China, a roundup of netizen objections to recent state media coverage of Mao from Global Voices, or a personal reminiscence of the Mao years by Jiayang Fan in the New Yorker.