Drawing the News: Apology Not Accepted

A roundup of online political cartoons from the past week. Click any image to launch the slideshow view. 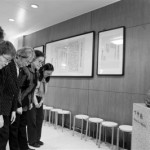 Bowing before a statue of her school’s deputy principal, former Red Guard Song Binbin publicly apologized for her role in Bian Zhongyun’s murder at the hands of fellow students in 1966. Song is the latest among several to apologize for their brutality during the Cultural Revolution.

While some netizens have commended Song, others question her motive. Wang Jingyao, Bian’s widower, says that Song has not apologized privately to the family, nor has she told the whole truth. Song said her mistake was “not stopping her classmates” from killing Bian, but denies a direct role in the murder, nor has she named the Red Guards who beat Bian to death.

Some critics of her apology argue that the “truth” cannot be fully aired under a system that bars free discussion of the Cultural Revolution. (Han Meng/Beijing News)

Song Binbin: Teacher, I’m sorry. I didn’t protect you… Don’t you see who this is? I was barefoot when it happened!

Bian Zhongyun: There were three feet kicking me. (Jiu’an)

Regret for her youth, or fond remembrance? (Meng Chenshang)

Police officer: You all beat people to death when you were young? So now you’re turning yourselves in?

Group: Oh, no, we came here to apologize… (Xiao Guai)