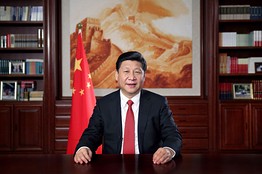 While Xi Jinping is widely believed to have established himself as an unusually powerful leader over the past year, his apparition in a Beijing bun shop last week—whose online emergence seems to have been stage-managed—balanced this by showing the common touch. Similarly, a glimpse of the president’s work environment delivered alongside his New Year address displayed both the power symbols of bright red encrypted telephones and a selection of humanizing family photos. From Brian Spegele at China Real Time:

Chinese leaders have delivered New Year’s addresses before; Hu Jintao stood stiffly at a lectern. So putting Mr. Xi behind a desk with books and photos on the wall marks a new type of image-crafting. Casting Mr. Xi as a patriot and a family man seemed foremost. Video of the address shows a painting of the Great Wall and a Chinese flag directly behind the large wooden desk. Six photographs can be seen in the bookcases behind and next to it.

State media identified the photos. In one, a younger Mr. Xi is pushing his late father, Xi Zhongxun, in a wheelchair. The elder Mr. Xi, a communist revolutionary who was purged by Mao Zedong and later rehabilitated, died in 2002.

Also at China Real Time, James T. Areddy highlights an online video which—like another that appeared late last year—emphasises Xi’s leadership and vision, and the unity of Party and people:

“On the road chasing our dreams, we walk side by side, sharing weal and woe, transcending differences and shaping the future together,” the video’s narrator says in English.

[…] The video appears to be the latest effort by Chinese authorities to invoke soft power through video, though it’s impossible to verify who made it. No credits appear that might identify a producer, and no source is named on Youku, the video-sharing website where it was recently uploaded.

The most repeated word in the video—dream—makes clear who inspired the production: Xi Jinping.

The party chief and president, who makes a cameo around the two-minute mark, sparked a sensation by invoking the notion of a Chinese Dream after he came to power a little over a year ago. Variations on the word dream are repeated seven times in the video, far more than mention of the party itself. “Our peoples’ dreams are our goals,” it says. [Source]

The 58-year-old senior policeman was seen leading a uniformed armed patrol on the Wangfujing shopping street, according to a post on the newspaper’s Sina Weibo account. He was photographed and told the unnamed reporter that he would continue his patrol to Tiananmen Square, the newspaper said.

Many internet users were sceptical about the chance encounter, as coverage of senior officials is usually strictly choreographed. “Journalists, who will you ‘incidentally run into’ today?” rights lawyer Yuan Yulai asked in a weibo post, which has since been deleted. Searches for Fu Zhenghua have been blocked on the microblogging platform, which is China’s largest.

[…] On Monday, Wu Tianjun, party chief of the Henan provincial capital Zhengzhou, was filmed travelling on a metro train after he also “incidentally encountered” reporters from Zhengzhou Television, who then broadcast a 2.5-minute long report on its evening news programme. Following widespread ridicule, an unnamed official of Zhengzhou city committee spoke to the People’s Daily to confirm that the metro journey was indeed an impromptu one. [Source]

Xinhua, without mentioning Xi’s excursion, asked whether officials like Fu and Wu were merely “showboating,” but appeared to give them the benefit of the doubt:

High-ranking local officials have hit the headlines with their frugality attempts, but are these real improvements to work styles, or simple posturing?

[…] “Undoubtedly, officials should serve the people,” said Yan Jirong, professor of politics at Peking University. “Therefore, they should go out of their offices often and engage the masses to know their needs.”

These excursions should not be simply labeled as shows, said Yan. The key is to differentiate between publicity stunts and governance, he added.

Such practices should have support institutional frameworks and be routinized, Yan added. [Source]