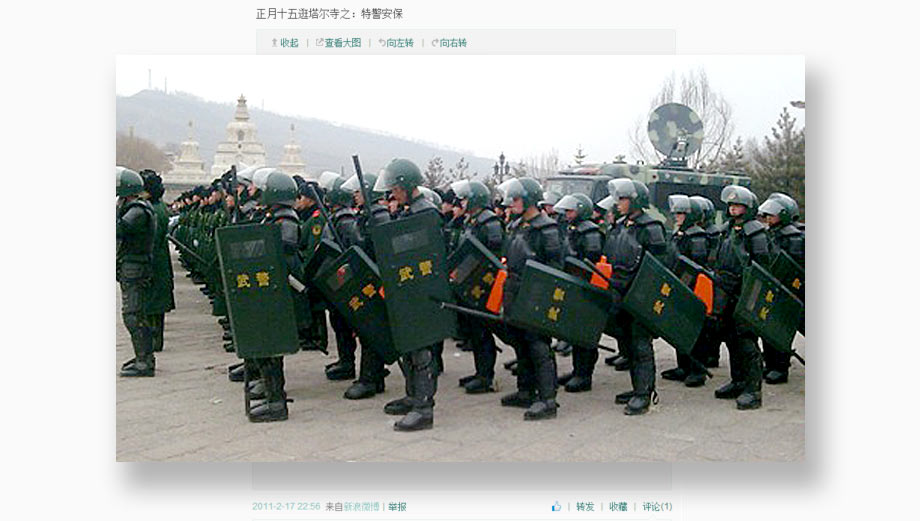 Earlier this week, human rights and cultural preservation NGO International Campaign for Tibet published “‘Has Life Here Always Been Like This?’: Chinese Microbloggers Reveal Systematic Militarization in Tibet.” Divided into three parts, plus a methodology and overview of Sina Weibo, the report contains censored microblog comments and images from Chinese tourists in Tibet. With analysis and additional context, the collection reveals intensified militarization and government efforts to control information in the restive and highly sensitive region. From ICT’s introduction:

Social media messages posted by Chinese tourists visiting Tibetan regions have provided a revealing window into Chinese policies in Tibet. The messages recovered by ICT provide further evidence of the large-scale security personnel deployments that have increasingly become part of the Tibetan landscape since the widespread Tibetan protests of 2008, followed by what now numbers more than 125 self-immolations. These observations counter the portrayal by Chinese officials and state media of a tranquil and grateful Tibetan population.

The messages highlight the disparate security conditions under which Tibetan and Chinese people live in the People’s Republic of China, with Tibetans treated with greater suspicion and targeted for even low-level information sharing.

Under China’s system for stability maintenance, or weiwen, authorities have implemented an extensive security apparatus and show overwhelming force in order to “maintain harmony and stability in Tibet.” At the same time, the Chinese government has sought to suppress the dissemination of accurate news from Tibet[1] through censorship and restrictions on foreign tourists.

Chinese authorities go to great lengths to censor the information available in the PRC. They have implemented measures that stretch across all forms of media, including responding to the ever-shifting landscape of the Internet with what is often called the Great Firewall. Even the fast-pace and diffuse dynamic of online social media have not allowed it to evade the grasp of authorities, who are becoming increasingly more adept at imposing measures that curb social media activity. This crackdown has resulted in a decrease of Weibo users and a shift to other platforms, such as WeChat.

Despite authorities’ efforts to censor to crack down on social media, ICT was able to collect hundreds of images and messages from the popular Chinese microblogging site, Sina Weibo, using the crowd-sourced perspective of Chinese tourists to further document the harsh security measures implemented in Tibet by Chinese authorities. […] [Source]

Also see ICT’s visual analysis slideshow, or their full collection of images and text. The report can also be downloaded as a .pdf.

The information presented by ICT stands in contrast to official Chinese media portrayal of the situation, which has long focused on close relations between Tibetans and Han in western China. After the Dalai Lama’s recent visit to Washington—which included a sit down with Barack Obama and a prayer delivery to the U.S. Senate—the Tibetan chairman of the TAR People’s Congress reiterated ethnic harmony, blamed the Dalai Lama for recent self-immolations, and emphasized local authorities’ continued opposition to engaging with the exiled high monk.

For more on the situation in Tibetan regions of China, see “Why are Monasteries and Homes Given ‘Portraits of the Great Leaders’?,” High Peaks Pure Earth’s most recent translation of a blogpost by Woeser.