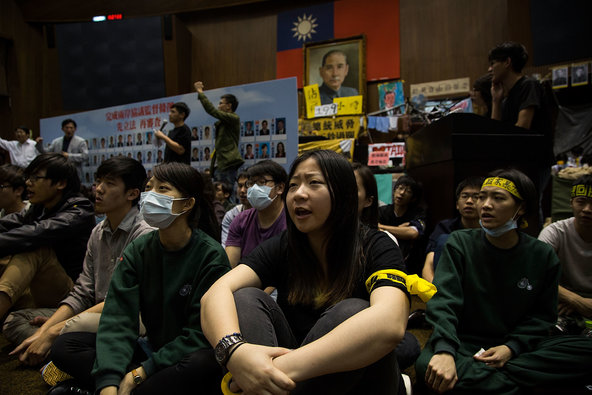 With the occupation of Taiwan’s Legislative Yuan in its 10th day, those protesting a controversial trade agreement with China have called for a massive sit-in outside of President Ma Ying-jeou’s office this weekend—a new demonstration to indicate that students and activists have no intention of yielding. The Wall Street Journal reports:

Protest leader Lin Fei-fan called for another sit-in in front of the Presidential Office this Sunday and said the occupation of the legislative building which began 10 days ago isn’t finished.

“The battle is far from over. The government must not assume by stalling, we will give up and leave the legislature building on our own,” said Mr. Lin, cheered by a throng of supporters, many of whom have camped out in front of the building since the onset of the protests.

Apart from a retraction of the trade pact, the protesters want a pledge from all lawmakers across party lines to implement a monitoring mechanism to oversee all future cross-strait deals.

[…] In a bid to resolve the gridlock, Mr. Ma, who also is the chairman of the ruling Chinese Nationalist Party, or Kuomintang, on Tuesday offered to meet with the students to hear their concerns. However, students want a guarantee from Mr. Ma that he won’t take disciplinary action against any KMT legislators who support their cause.

While President Ma agreed earlier this week to meet with student leaders, students have said they won’t meet until their concerns are addressed, and that demonstrations will continue until their demands are met. More from AFP:

“Ma is not sincere, on the one hand he is willing to talk but the Kuomintang will not back down (on the trade pact).

“There is no meaning to hold a dialogue… We invite everybody to take to the streets on Sunday,” student leader Lin Fei-fan said in a press conference outside parliament.

“We want to tell Ma the people’s opinions and tell politicians that they have to be responsible and face the people.”

[…] Lin said the demonstrators were not going to give up until their demands were met.

On March 18, students and activists occupied Taiwan’s Legislative Yuan in protest of the Kuomintang’s failure to hold agreed upon public hearings and a clause-by-clause review of the controversial Cross-Strait Service Trade Agreement (CSSTA), a pact that would open up mainland and Taiwanese service sectors to mutual investment. Many Taiwanese citizens are concerned the agreement would enable Chinese companies to seize control of—and influence over—service industries on the self-governed island that Beijing claims is within its sovereignty.

More protesters gathered outside the Executive Yuan, Taiwan’s cabinet offices, to attempt another occupation on March 23, and were cleared out by riot police by the following morning in a violent skirmish that left many demonstrators injured. At his personal blog, J. Michael Cole looks at the media battle to allocate blame for the violence, and warns that mainland-like “opinion monitors” may be trying to influence online dialogue about the crackdown:

Less known are behind-the-scenes efforts, for which there is mounting evidence, to counter, if not outright delete, information about and footage of the instances of disproportionate response by riot police during the incident at the EY. Interestingly, this development occurs just as the Chinese government confirms the existence of a training program, launched in 2006, for about 2 million “opinion monitors.”

Soon after the streets in front of the EY had been cleared by the several hundreds of police officers deployed that night, witnesses of the night’s events began posting videos on Internet platforms such as YouTube. One such video showed riot police swinging their truncheons ad hitting unarmed protesters, an event that I and another foreign reporter witnessed firsthand on Beiping Rd behind the EY. A few moments later, the videos were no longer available (thankfully those were stored elsewhere and are now circulating on the Internet).

On Tuesday a Taiwanese approached me to complain that his efforts to update the Wikipedia page created for the Sunflower Student Movement with a link to my eyewitness account in The Diplomat of the raid at the EY had been frustrated by other users. A quick look into the posting history showed IP address 61.70.50.164 repeatedly deleted the reference. Asked to explain his/her action, the user wrote, “Use of excessive force is subjective. Do not confuse issues.” Lasersharp, the registered user who had attempted to post the reference to my article, then retorted, “yours is based on [Premier] Jiang’s statement, whereas excessive force used in Diplomat source is based on eyewitnesses, sorry.” 61.70.50.164 replied with, “Please stop abusing Wikipedia to push your personal agenda with subjective statements,” and “Mr. Jiang has nothing to do with this. There’s no evidence of excessive force as yet other than claims by activists. Don’t make stuff up.” (I am now informed that attempts to link articles in the Taipei Times have equally been blocked.)

J. Michael Cole has been writing extensively about the ongoing anti-CSSTA demonstrations at The Diplomat, the University of Nottingham’s China Policy Blog, and his own Far-Eastern Sweet Potato blog.

Many in the mainland expressed dismay at the chaotic display of democracy represented in media reports, and have lashed out against Hong Kong and Taiwanese celebrities who support the movement. A post from the New York Times’ Sinosphere blog notes that while criticism has continued, occasional voices of support are also speaking from the opposite side of the Taiwan strait:

Chinese state-run media have often tried to portray Taiwan’s democracy as chaotic, an assertion that’s been repeated since the student protests began. Global Times, a newspaper run by China’s ruling Communist Party, said in an editorial last week that the protests “shamed” Taiwan’s democracy. “Taiwan’s rule of law is paralyzed at the moment,” it said.

[…] Amid the criticism, some Chinese activists said they supported the student demonstrators in Taiwan and that their actions upheld democratic values.

Hu Jia, a dissident who is under house arrest in Beijing — which he said was intended to keep him silent during the visit of the United States’ first lady, Michelle Obama, to China — has been following developments in Taipei online.

[…] “I support the students in Taiwan, and hope they can pressure President Ma Ying-jeou and the Kuomintang,” he said. “The other side is that I hope this inspires Chinese students to study Taiwanese students ability to express themselves.”

For a deeper look into Taiwanese anxiety over closer relations with the mainland and more commentary on the ongoing protests, see “Why Taiwanese Students Stormed the Government,” from NPR, or “What Taipei’s Protesters Know,” from the Wall Street Journal.