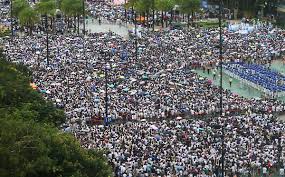 This week on CDT, a collection of “Directives from the Ministry of Truth” and a politician with a piscine nickname:

Following the July 1 protest march in Hong Kong that may have attracted as many as half a million people, music videos expressing solidarity with Hong Kong democracy supporters were ordered removed from the Chinese Internet, including any version of “Do You Hear the People Sing” from the musical Les Misérables with new Cantonese lyrics.

Following the revelations that three high-ranking officials were expelled from the CCP for corruption, censors ordered that coverage of the story parrot Xinhua wire copy.

In a comical case of alleged dyslexia, Longnan City Party Secretary, Sun Xuetao donated blood from his left arm but was photographed holding his right arm. Netizen speculation about the apparent mix-up attracted the scrutiny of censors whose orders to news media read: do not hype!

Reports on a terror attack in Qaraqash, Xinjiang were deemed too sensitive for publication, but not before China Youth Net published an article about local meetings that followed the attack.

Regarding ongoing audits into the financial affairs of government institutions, censors advise media outlets not to stray from Xinhua coverage.

The word of the week is “stiff fish,” or the derogatory nickname for Jiang Yu (姜瑜 Jiāng Yú), former spokesperson for China’s Ministry of Foreign Affairs (MOFA) and a deputy commissioner of MOFA’s Office of the Commissioner in Hong Kong since 2012.