The Economist: Xi Who Must Be Obeyed 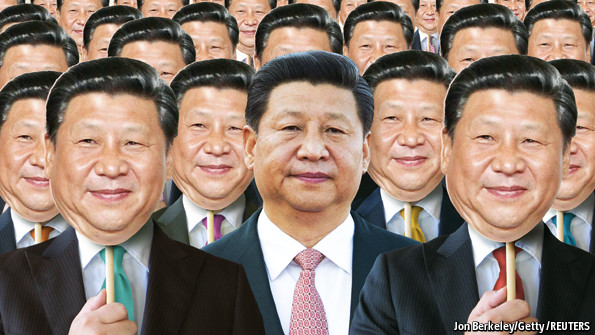 Chinese President and CCP General Secretary Xi Jinping has made it onto the cover of The Economist yet again, and is this time the subject of two articles in the most recent issue. Since Xi became China’s top leader two years ago, he has successfully gained mass popularity through a series of image-crafting campaigns, while at the same time steadily working to consolidate power within the Party. One of the articles outlines the charismatic leader’s presidential tenure to date, asking how his accumulated clout could best be used for China. The article opens by contrasting Xi’s personal cache of power with the policy of “collective leadership” that had guided the Party since Mao’s death:

THE madness unleashed by the rule of a charismatic despot, Mao Zedong, left China so

traumatised that the late chairman’s successors vowed never to let a single person hold such sway again. Deng Xiaoping, who rose to power in the late 1970s, extolled the notion of “collective leadership”. Responsibilities would be shared out among leaders by the Communist Party’s general secretary; big decisions would be made by consensus. This has sometimes been ignored: Deng himself acted the despot in times of crisis. But the collective approach helped restore stability to China after Mao’s turbulent dictatorship.

Xi Jinping, China’s current leader, is now dismantling it. He has become the most powerful Chinese ruler certainly since Deng, and possibly since Mao. Whether this is good or bad for China depends on how Mr Xi uses his power. Mao pushed China to the brink of social and economic collapse, and Deng steered it on the right economic path but squandered a chance to reform it politically. If Mr Xi used his power to reform the way power works in China, he could do his country great good. So far, the signs are mixed. […] [Source]

A second article reads as a profile, and includes a survey of the personal risks that come with heavily fortified power:

Mr Xi’s bid for popular acclaim, however, does not involve any attempt to shed the secrecy that surrounds the doings of the party elite. Since becoming leader, Mr Xi has not given any press conference about his domestic policies, nor granted any interviews. He has tightened controls on online social networks and launched a sustained campaign against political dissent, including the rounding up of dozens of activists. Even those calling for officials to be more open about their wealth are being targeted.

Mr Xi may enjoy unusual popularity, but there are many Chinese who want changes that he appears reluctant to make: not least a bigger say in the running of their local governments and the protection of their communities from environmental damage. In the years ahead, as the economy slows, China’s new middle class is likely to get more restless. By painting himself as the main man, Mr Xi will have no one else to blame if things go wrong. […] [Source]

A third article looks at the powerful princeling‘s father, late revolutionary hero Xi Zhongxun, and the postmortem popularity he’s enjoyed since his son came to power:

ASK a resident of Fuping county in rural Shaanxi province what the Chinese president has done for them, and they point to the smooth asphalt road beneath their feet. Since Xi Jinping came to power, the birthplace and burial site of his father has become a national tourist attraction. Xi Zhongxun was a revolutionary hero in his own right; since his son assumed power, he has been promoted further. […] [Source]

This is the sixth time that Xi Jinping has appeared on the cover of The Economist (Oct 23, 2010; Oct 27, 2012; May 4, 2013; Jun 8, 2013; Nov 2, 2013). The May 2013 cover, which showed Xi wearing the Qianlong Emperor’s robe under the headline “Let’s Party Like it’s 1793,” irked censors in Beijing. Earlier this month, political news website The Paper, a newly launched site that is part of Xi’s new-media propaganda strategy, attracted netizen criticism after selectively translating The Economist’s August 23 article “What China Wants.”