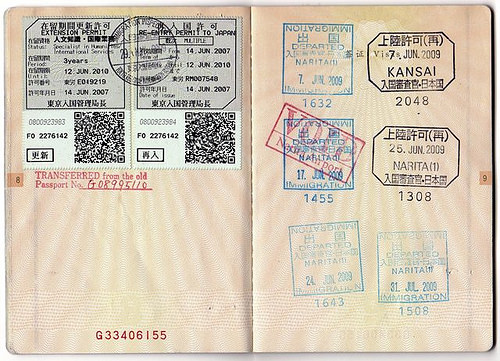 After being denied re-entry to China eight times, Feng Zhenghu lived in Tokyo’s Narita Airport for 92 days in 2009-2010. Now Feng is telling the story of his airport odyssey on his blog, and CDT is translating his account. This is the fifth installment. Read previous installments here:

I had already gone hungry for three days, and I certainly wouldn’t have anything to eat today, either. But I would absolutely not surrender. I would not trade my own dignity for food. I had no choice but to burn all my bridges and put my life on the line.

In the morning, I explained in person to Mr. Suzuki of the Narita Immigration Bureau that I wished to give up my Japanese visa. I called my sister to arrange for a lawyer to officially present the Tokyo Immigration Bureau with a “Japanese visa cancellation application” and to return my alien registration card.

In the evening, I posted online my “Statement Renouncing My Japanese Visa” from my cell phone, to let the public know of my situation and to eliminate any outs for myself. No matter if the road ahead was a dead end, I would stick to this path. The following is the main content of the statement:

“In Japan I hold a ‘humanities expert and international business’ work visa. I can freely travel in and out of Japan, and I am able to reside in Japan for a limited amount of time. However, from June 7th onward, when I was unjustifiably denied entry into my own country by Shanghai authorities, I have been unable to engage in Sino-Japanese business. I therefore have no choice but to resign my job. Here in Japan, I have no source of income. My Japanese work visa has lost its real meaning to me.

“This Japanese work visa, which expires on June 12, 2010, has now become the barrier keeping me from returning to my country. The Shanghai authorities are using it in an attempt to cover up their illegal denial of entry to me. Because of the weakness of some private businesses who put economic benefit before rights, the Shanghai authorities can easily require an airline to refuse a passenger or to take part in an illegal abduction. They will use any means necessary to illegally exile me to Japan. They use my Japanese visa as an excuse for their transgressions, attempting to conceal the fact that they are acting illegally. Perhaps this is also why the government of Japan has stayed silent throughout this ordeal. Without the cooperation of the airline, the Shanghai authorities would never have been able to do this. Eight times in a row, they have taken a law-abiding Chinese citizen and forced him to be exiled to Japan, denying him entry into his own country.

“With the cooperation of the airline, Shanghai authorities succeeded once again in a violent abduction, kidnapping a Chinese citizen to the other shore of the Sea of Japan. But this time, I no longer have the heart to return to Japan. I will not give in to this violent oppression. I’ve already been refused entry eight times. I clearly understand that if I were to enter Japan again, the Japanese government would just remain silent. The airline wouldn’t dare take me back to China, even if they were compensated. The government of China would remain silent, the criminals among the local Shanghai authorities would continue skirting the law, and the beautiful country of Japan would become my cage. Perhaps I would never again see my mother or wife, never again be able to perform my duties in my motherland. At the same time, even more Chinese citizens would continue to suffer the violation of this fundamental human right–the right to return to their country of origin. Therefore, this time I have resolutely decided not to enter Japan and to demand my return to China. Even as a Chinese person, I also want to be treated like a human being. Because the collusion of the Shanghai authorities and the Japanese airline to kidnap me to Japan is a disgrace to the Chinese government, and a disgrace to myself as a person.”

My friendship with Japan spanned nearly 20 years. I had worked on so many projects that have pushed the Sino-Japanese relationship forward. But in the end, I had to cut off all ties and say goodbye to Japan. This is regrettable, but I had no choice. At that moment, I still hoped Japan would become a nation of friendship, and wished the best for the friendship between China and Japan. [Chinese]