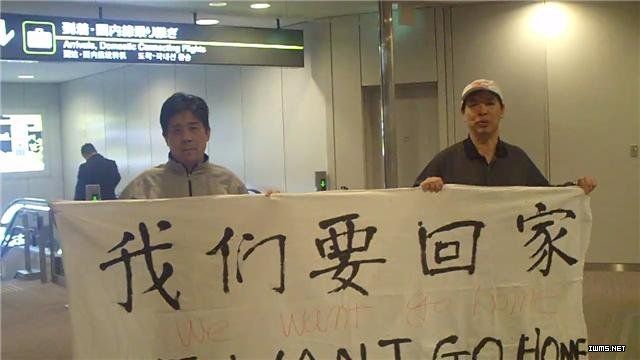 After being denied re-entry to China eight times, Feng Zhenghu lived in Tokyo’s Narita Airport for 92 days in 2009-2010. Now Feng is telling the story of his airport odyssey on his blog, and CDT is translating his account. This is the seventh installment. Read previous installments here:

I’d been living in the immigration hall at Terminal 1 of Japan’s Narita International Airport for six days. By night I slept on a bench, and by day I sustained myself primarily on tap water. The immigration bureau officials stipulated that no employees could buy food for me, and they refused to let my friends in Japan send food. So I had no choice but continue my forced hunger strike. I would choose death over dishonor.

The Democratic Party of Japan had won the recent elections, and since it was its first time in power, it needed the support of the Chinese government. The Hatoyama administration’s foreign policy was to “get closer to China and move further away from the U.S.” It wasn’t about to insult the Chinese government for the sake of the human rights of an ordinary Chinese citizen. Instead, it supported, or at least tacitly consented, to the Chinese officials’ violation of human rights. But Japan is a democratic country with the rule of law. The Japanese police wouldn’t be so crude as their Chinese counterparts–they wouldn’t drag me into Japan against my will. All the Japanese government could do was starve me into crossing the border. But this trick doesn’t work on an idealistic person who has survived the purgatory of Chinese prison.

When one door shuts another one opens. The day before, a stranger arriving from China brought me a package of crackers, a bag of little cakes, some chocolate, and three drinks. He had been entrusted by the Shanghai lawyer Yang Shaogang to buy some food for me at the departure hall of the Shanghai airport. To be in dire straights far away from home and have the first food I receive come from my own country, from a close friend and mentor for whom I have the utmost of respect and admiration—it really moved me.

I had food, delicious and filling. Not having eaten in over three days, however, my stomach had shriveled up, and I couldn’t eat normally. Instead I had to eat bit by bit, slowly returning my appetite to normal. With a few packs of crackers, I was able to break the food blockade, and could continue my protest at the airport for the long haul.

Chinese people couldn’t imagine—most Japanese people couldn’t imagine—that I’d go hungry on Japan’s doorstep. If they knew the truth, they would give me a package of crackers on their way through immigration, helping me to get through this difficult time. So I went online and posted a request for help under the pen name Shu Wen, titled “Give Feng Zhenghu a Pack of Crackers.”

The letter ended like this: “Dear readers, if you or your friends will be taking United Airlines, Air China, All Nippon Airlines, or EVA Air to Narita International Airport, when arriving at the south wing of Terminal 1 pay attention to the area for filling out declaration cards in the immigration inspection hall. You may see Feng Zhenghu. Give him a package of crackers or some other food—you will be giving support and sympathy to an individual who is struggling through adversity to uphold the human rights of the Chinese people.