Statement on the Sealing of Zenith Holdings’ Weibo 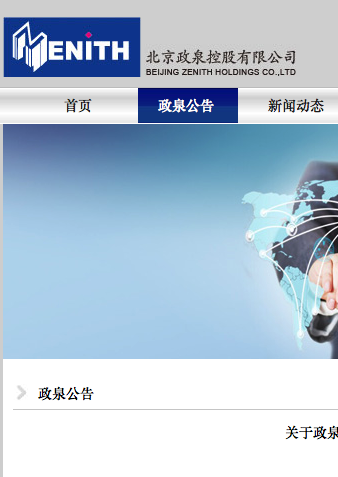 Amid the row between Caixin Media founding editor Hu Shuli and the controlling shareholder of Beijing Zenith Holdings and Beijing Pangu Investment Guo Wengui, Zenith posted an official statement to their website on the morning of April 1, 2015:

Our company again solemnly declares that all contents of the aforementioned article are conclusive and based on evidence, and contains no fabrications or untrue information.  We have lodged complaints about the irregular screening and sealing of our Weibo account to the relevant departments.

Here our company also wishes to strongly question the following: previously, media and Weibo wantonly published malicious slander and false reports about our company and Mr. Guo Wengui. Why was this allowed to spread unsupervised? In regards to the screening of our posts and sealing of our account—which adheres to normal regulations—relevant departments, please give a certified reply to our questions!

As for the censorship of our company and the system of control being subject to certain interest groups, we will take all legal means in safeguarding our legitimate rights and interests.

We hereby issue this declaration!

As of the time of this post, the above announcement is accessible on Zenith’s website—which is hosted in mainland China—and on Pangu Plaza’s official Weibo. Text of the open letter “Response to Hu Shuli’s Unjustifiable Visit to Guo Wengui’s Family Grave” is also still available on Zenith’s website, despite a nationwide censorship directive that media not republish or hype the article and the removal of screenshots reposted to Weibo as described in the above statement.

Last week, Hu Shuli’s Caixin Media published an exposé accusing Guo Wengui and former deputy minister of state security Ma Jian of toppling Beijing’s vice mayor over a property dispute between state-owned Founder Group and Guo’s Zenith concerning development rights for the Pangu Plaza in Beijing. Following the publication of the Caixin article, Guo Wengui fired back with the “Response to Hu Shuli’s Unjustifiable Visit to Guo Wengui’s Family Grave,” an open letter to Hu Shuli which was then reposted by the official Weibo of Pangu Plaza. The letter accuses Hu Shuli of illegally possessing securities and stock in Founder Group, having an affair with former Founder chief Li You, and sending reporters to visit Guo’s “family grave.” Caixin is now suing Guo Wengui, Zenith, and the Hong Kong newspapers Apple Daily and Hong Kong Commercial Daily for libel.