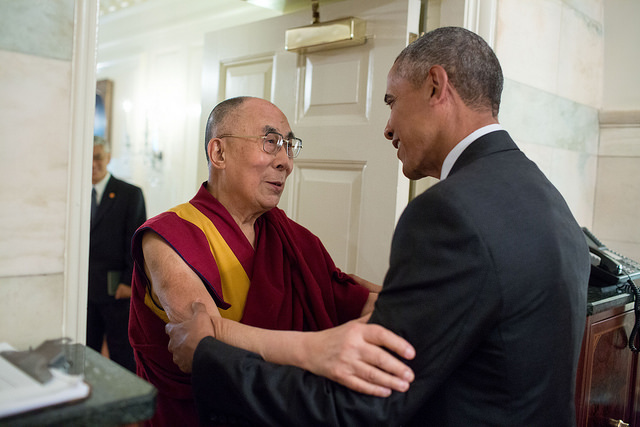 President Barack Obama met with the Dalai Lama at the White House yesterday. This was the fourth time in his tenure (following one-on-one meetings in 2010, 2011, and 2014; and an appearance at a National Prayer Breakfast last year) that the U.S. president has officially hosted the exiled Tibetan spiritual leader, and the meeting occurred amid characteristic protest from Beijing, who continues to regard the 14th Dalai Lama as a “dangerous separatist,” despite his decades of advocating for a “middle-way” approach to genuine Tibetan autonomy within China. As was the case in the previous meetings, this week’s sit-down was held not in the Oval Office, but in the White House Map Room, and members of the press were not invited to attend. The AFP reports on the meeting, the standard outcry from China’s foreign ministry that followed, and calls from the exiled Tibetan community for Washington to put more pressure on Beijing regarding the protection of human rights in Tibetan regions of China:

Obama carried out what has become a political rite in Washington, spiriting the exiled Tibetan religious leader into the White House through the back door — and prompting the usual Chinese denunciations.

“No matter in what way the US leader met with the Dalai Lama, the meeting violated the US promises of acknowledging Tibet as a part of China, not supporting Tibet independence and not supporting separatist activities,” Lu Kang, a Chinese foreign ministry spokesman, told reporters in Beijing.

“Such a meeting will hurt China-US mutual trust and cooperation.”

[…] In a statement after the meeting, the White House said Obama had “encouraged meaningful and direct dialogue between the Dalai Lama and his representatives with Chinese authorities to lower tensions and resolve differences”.

Obama also “emphasised his strong support for the preservation of Tibet’s unique religious, cultural and linguistic traditions, and the equal protection of human rights of Tibetans in China”, according to the White House statement. [Source]

The White House Press Office has issued a press release and photo from the meeting: Beijing has in recent years expressed little willingness to engage in the “meaningful and direct dialogue” that Obama urged. In 2014, after the Dalai Lama praised Xi Jinping for being “more open-minded” than his predecessors and hinted that informal discussions may soon allow him a pilgrimage to China, Beijing reasserted it’s anti-Dalai Lama stance, and promised to “severely punish” any Party members in the Tibetan Autonomous Region who support him. Also in 2014, the Dalai Lama repeatedly suggested that he could be the last incarnation in a centuries old political and spiritual tradition, and Beijing countered by asserting its right to name his successor. A report late last year from Reuters offered evidence affirming suspicions that Beijing has long been supporting a schism within Tibetan Buddhism regarding a controversial minor deity in order to harm the Dalai Lama’s global reputation.

While threats from Beijing that interactions with the Dalai Lama could hurt relations with China are commonplace, little diplomatic fallout tends to follow his meetings with Obama. However, Beijing’s systematic protest of diplomatic engagement has resulted in less face-to-face time between the Dalai Lama and heads of Western states in recent years. At TIME, Tara John talks to scholars to explain the insecurity underlying Beijing’s insistence that the Dalai Lama is a “dangerous separatist”:

The antipathy toward the Dalai Lama may have its roots in Chinese grievances that actually have little to do with Tibet. According to [London School of Economics professor William] Callahan, Beijing’s stance on Tibet is tied in with “very deep feelings … of a ‘century of humiliation’” — a period in the 19th and 20th centuries where China lost control of its territory to Western and Japanese imperialists. According to this Chinese Communist Party founding narrative, that century ended when Mao established the People’s Republic of China in 1939. Even though therest of the world — especially the Western world — views the Dalai Lama as a benign religious and cultural icon, Callahan believes that Chinese officials will continue to regard him as a political figure seeking to undermine their legitimacy.

“In a sense it is a sign of insecurity,” says Kerry Brown, professor of Chinese studies and director of the Lau China Institute at King’s College in London. “They are uneasy to questions about the rights of their control” and are “willing to throw diplomatic capital” over meetings that are actually of little geopolitical significance, like today’s encounter in the White House. Brown notes that in recent years Western leaders, apart from the U.S., have mostly stopped meeting with the Dalai Lama, largely over fears of negative diplomatic repercussions with Beijing. In 2012, U.K. Prime Minister David Cameron’s meeting with the Dalai Lama was strongly condemned by the Chinese. “They didn’t get ministerial visits from China for a year,” says Brown. [Source]

According to the White House statement, the Dalai Lama offered his condolences to President Obama over the recent mass shooting in Orlando, Florida, and the president praised the Dalai Lama’s commitment to environmental protection and nonviolence, while also reiterating that the U.S. views Tibet as part of China.

In 2011, the Dalai Lama ceded the political responsibilities associated with his incarnated role—which since his exile has largely comprised of advocating for Tibetan autonomy—to democratically elected Sikyong Lobsang Sangay. In May, Sangay was re-elected to the role after a political campaign that the Dalai Lama criticized for threatening the unity of the exiled Tibetan community. On Thursday, Sangay was presented an award in Washington from the National Endowment for Democracy recognizing the democratic achievements of the Central Tibetan Administration, and the Dalai Lama was also in attendance.