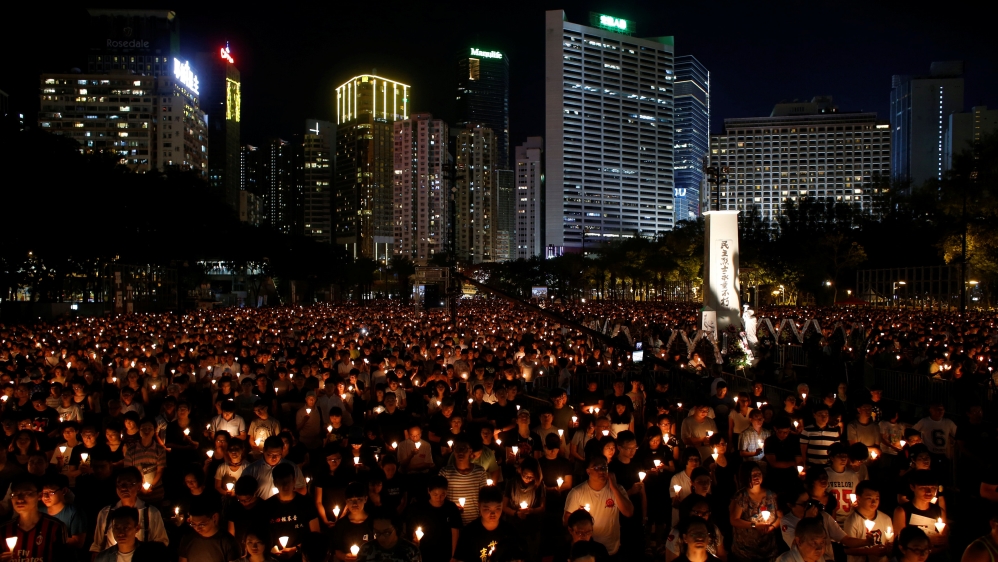 Last Saturday marked the 27th anniversary of the June 4, 1989 crackdown on pro-democracy protesters in Beijing. Ahead of the date, as Chinese authorities engaged in their annual rituals to limit public commemoration of the fateful day, Hong Kong residents were preparing to use the relative freedom of expression available in the semi-autonomous region to mark the event, as they do each year. Last week, attempting to ease concerns after only 1,500 people showed up for a commemorative march (the smallest turnout in eight years, half of last year’s), the Alliance in Support of Patriotic Democratic Movements in China secretary Lee Cheuk-yan estimated that 100,000 people would be at the annual candlelight vigil in Victoria Square on June 4. At The New York Times, Michael Forsythe and Alan Wong report that “tens of thousands” gathered over the weekend in Victoria Park, noting a substantial gap between the Alliance’s final attendance estimate and the police figure. The report also highlights a generational and political split in Hong Kong that may help to explain why at recent commemorative events have been dropping:

“I’m Chinese,” said H. C. Tsui, 76, a retired middle school headmaster and native Hong Konger who has attended most vigils in the past quarter-century. He was sitting with many other elderly people on bleachers on the perimeter of the athletic fields, where organizers estimated 125,000 people gathered this year. (The police put the figure at 21,800.)

“I have to remember those who have been persecuted and assaulted during the 6-4 movement,” Mr. Tsui said, using a term to describe the date of the protests. “That is my job, my responsibility. I must be here.”

Many young people in this city of more than seven million do not agree with Mr. Tsui’s view of himself. Dismayed by the continued autocratic rule of the Communist Party in Beijing, and the threat it poses to Hong Kong’s liberties, they increasingly identify themselves with their city, not China.

As the vigil got underway after nightfall, about 20 masked people waving banners calling for Hong Kong’s independence were refused entry into the venue by organizers. Some, while pushing for self-determination for Hong Kong, also see the vigil as important. [Source]

Ahead of the vigil last week, The New York Times contrasted the views of several Hongkongers to display the generational schism in pro-democracy organizers’ priorities for the future, and the importance of June 4th commemorations in realizing it. Among those on the list was Joshua Wong, the student organizer of the 2014 Umbrella Movement and founder of the new political party Demosistō:

Mr. Wong, 19, was a student leader of the 2014 street protests. In 2016, he founded a new political party, Demosisto, to push for a referendum on Hong Kong’s political future. He plans to attend the Victoria Park vigil.

“The reason younger people are avoiding Victoria Park in the past few years is they felt the older democrats have failed to represent them,” he said. “Just a few years ago, the Alliance was singing songs like ‘The Chinese Dream,’ and even the ‘Descendants of the Dragon.’ It was the older generation’s nationalist sentiment with China. Our generation grew up witnessing how the Chinese Communist Party has come to appropriate the Chinese identity for itself, so we’re not associating ourselves with that.”

“The most important aim is to tell people there the importance of pursuing self-determination for Hong Kong,” he said. “June 4 launched Hong Kong’s democracy movement. The Umbrella Movement launched the next wave.” [Source]

Taking a closer look at the fractured pro-democracy movement in Hong Kong and its potential impact on regional politics at CNN, James Griffiths and Wilfred Chen note that student groups once instrumental to the Alliance boycotted this year’s Victoria Park vigil:

Leading student groups boycotted the decades-old candlelit vigil held in Victoria Park, over complaints the event has become “rigid” and too focused on Chinese issues, rather than advancing democracy in Hong Kong. One group even denounced the vigil organizers — members of the Hong Kong Alliance — as “pimps in a brothel.”

[…] The Hong Kong Federation of Students (HKFS) — the city’s oldest and largest student organization — withdrew from the Alliance in the lead up to this year’s event, sparking fears that attendance would be far lower than in previous years.

[…] “Nothing could stop us remembering the Tiananmen crackdown tonight,” organizers told the crowd after a protester briefly burst on stage waving a colonial flag and calling for “Hong Kong independence.”

[…] Speaking at [an] event [debating the importance of the main vigil], Ray Wong, the leader of localist group Hong Kong Indigenous, said that mourning the Tiananmen massacre was no longer relevant to Hong Kong, and that it symbolized a misguided fantasy of reforming China. Instead, he said, Hong Kongers should focus on “building power” so that China’s Communist Party would one day have no choice but to grant independence to the former British colony. […] [Source]

Last week, Tiananmen veteran and former student leader Wang Dan warned the independence-minded youth that their plan to boycott the vigil would be a bad move, encouraging them to keep allies close rather than build walls. From the South China Morning Post’s Choi Chi-yuk:

“I would like to urge them to spend more time learning from history,” Wang, 47, said.

Members of a political campaign “will not succeed when they draw a line restricting themselves from others, instead of garnering support from allies”, he said.

The vigil was not just a remembrance of the events in Tiananmen Square in 1989, when the ­democracy movement flowered before being crushed by the leadership; it was also a protest against Beijing, he said.

“In my view, deep inside the hearts of those who are at the helm of the leadership in Beijing there will be fear, as long as that many people keep showing up in Victoria Park, reminding Beijing they will neither forget nor give up” their fight for the vindication of the movement, as well as for democracy, he said. […] [Source]

Polling from the University of Hong Kong shows that around two thirds in the territory believe that the Chinese government mishandled the Tiananmen protests, and that Hong Kong has a responsibility “to instigate the development of democracy in China.”

In 2014, the Alliance in Support of Patriotic Democratic Movements sponsored the opening of the June 4 Memorial Museum in Hong Kong, and tension between pro-Beijing protesters and supporters of the museum was well noted. Just ahead of the 27th anniversary of the crackdown, The Economist reported that the museum has been facing pressure to close, believed to be coming from Beijing and its political allies in Hong Kong:

The cramped, mazelike display, on the fifth floor of a nondescript office building in Hong Kong’s Kowloon district, includes a bullet-pierced helmet that was worn by a student who was taking photographs of the army’s assault. There is also a two-metre replica of the “Goddess of Democracy”, a plaster statue that was erected by student demonstrators on Tiananmen, opposite the portrait of Mao that hangs at the entrance to the Forbidden City (see picture).

The building’s owners are clearly unhappy with the museum and the stream of visitors to it. In the middle of last year they deployed security guards at the entrance to the building, who began keeping records of visitors’ identity cards. This scared some people off. Mainlanders once made up half of the trickle of visitors. Their proportion fell to a quarter.

Now the landlord is taking legal action against the alliance, accusing it of violating the terms of the lease by using the space for an exhibition. The alliance’s chairman, Albert Ho, says he believes that the Chinese government and other “pro-China enterprises” with “infinite resources” are behind these moves. Rather than fight a costly and protracted battle, the alliance is looking for new premises to house the exhibits. It plans to sell the existing space after an annual vigil on June 4th marking the crushing of the unrest in 1989. [Source]

At Al Jazeera, Laya Mahashwari has more on the pressure that the museum has been facing since before it opened its doors to the public, and on a flailing crowdfunding campaign to find it a new venue:

[…] Louisa Lim, a professor at the University of Michigan who authored the book, People’s Republic of Amnesia – an investigative look at the Tiananmen Square massacre, notes that “the campaign against the museum began by complaining about the number of visitors before it had even opened”.

Alliance members argue that the lawsuit has little to do with property regulations, as one corporation member, Yeung Cho-ming, had told the South China Morning Post that “the [Tiananmen Square incident] is sensitive and contentious”, and that the corporation fears the museum will bring it “trouble”.

[…] The alliance is now running a crowdfunding campaign with the intention of gathering approximately $400,000 to be able to change their venue. However, the response to their campaign has been tepid so far, and the organisers are lagging behind their target, museum staff told Al Jazeera.

The alliance hopes to use the money raised, along with the proceeds from the sale of the existing property, to move into a bigger, standalone space. “We are very determined to ensure there is always a June 4 museum in Hong Kong,” says Ho. [Source]

Beijing’s alleged application of pressure to limit political freedoms in semi-autonomous Hong Kong—particularly freedom of expression—have become increasingly common in recent years. Beijing’s use of economic leverage to encourage self-censorship has been noted since 2014, and editors at liberal Hong Kong papers have been known to lose their posts after sensitive stories go to press. Recently, concerns mounted after several Hong Kong booksellers known for releasing salacious titles on Chinese leaders disappeared from Hong Kong or Thailand to appear in detention in China.

As thousands were preparing to attend the vigil in Victoria Park, Taiwan’s parliament held its first official commemoration of the bloody crackdown 27 years ago. The AFP reports:

In the past, Taipei has repeatedly urged Beijing to learn lessons from the bloody Tiananmen crackdown on pro-democracy protesters. But parliamentarians had never before gathered to voice their views.

A day ahead of the June 4 anniversary, senior lawmakers from the DPP and the Beijing-friendly Kuomintang (KMT) were joined by human rights activists and exiled Tiananmen student organiser Wuer Kaixi to observe a minute’s silence.

They also signed a motion proposed by DPP lawmaker Yu Mei-nu to demand the government “express Taiwan’s serious concerns over redressing the June 4 incident at the appropriate time” in their future interactions.

“Taiwan and [the mainland] have very close ties, so the suppression of human rights that happened to Chinese citizens could also threaten human rights in Taiwan,” Yu said. […] [Source]

Tsai said in the run-up to Taiwan’s elections earlier this year that she had seen people from China, as well as the Chinese territories of Hong Kong and Macau, mixing with crowds in Taiwan.

“These many friends, after experiencing things for themselves can see that in fact there’s nothing scary about democracy. Democracy is a good and fine thing,” wrote Tsai, who took office last month.

[…] Tsai also said in her Facebook post about the Tiananmen crackdown’s anniversary that nobody could deny the material advances China had made under the Communist Party.

However, China would win even more respect internationally if it gave its people even more rights, wrote Tsai, who is from Taiwan’s pro-independence Democratic Progressive Party. [Source]

Chinese Foreign Ministry spokesperson Hong Lei declined the suggestion on Monday, saying that “facts prove that the path China is now going down accords with the reality of China’s development and the wishes of the Chinese people and is the correct one.”