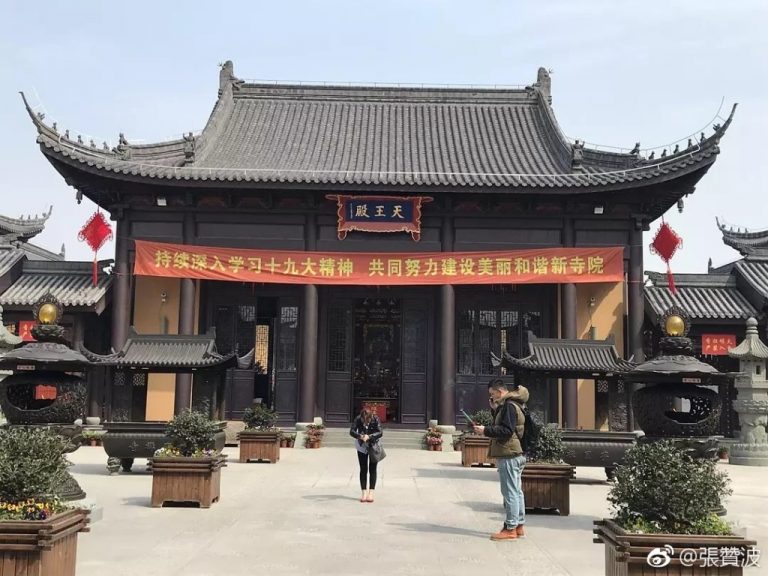 Amid a renewed domestic interest in Buddhism, sacred Chinese Buddhist sites have in recent years become major tourist attractions. This tourism boom has been fueled by a growing spiritual vacuum amid China’s newly-moneyed classes, but efforts to cash in on it now appear to have been stymied by a state drive to promote “traditional” and “indigenous” faiths including Buddhism (which runs tandem to a campaign guarding against “overseas infiltration through religious means”). While the boom has raised concerns over the threat that a massive influx of tourist traffic could have on the ancient sites, it has also raised alarm over the commercialization of the sacred. Following years of promotion of an upcoming IPO, the Putuoshan Tourism Development Co.—operating near the sacred Buddhist peak Mount Putuo off the coast of Zhoushan—had planned to go public this summer. However, following a wave of activism by Buddhists and monastics based at Mount Putuo, the China Securities Regulatory Commission earlier this month announced that the IPO application had been withdrawn. At Bloomberg View, Adam Minter reports, providing some context on the commercialization of religious revivalism in China:

[…] Last week, after an unrelenting campaign against the IPO by furious monks, China’s top securities regulator announced that the listing had been withdrawn. It was an unusual move by an officially atheist government. But under President Xi Jinping, traditional Chinese religions are enjoying a surge in state support, and are increasingly expected to adhere to higher values than the bottom line. The country’s extended experiment in commercialized religion, in fact, is under threat.

[…] The solution [to fears of foreign infiltration via religion after the relaxation of religious controls in the 70s] officials hit upon was to give approved religious groups permission to self-fund through whatever means they might devise. Thanks to additional rules that ordered the return of religious property that had been seized in previous decades (including temples, monasteries and churches), many of China’s religious organizations found themselves in a position to go into business — specifically, the real-estate business. These days, it’s not unusual to find Chinese churches or temples adjacent to, or part of, a shopping mall.

From there, the commercial opportunities only expanded. As these faiths reemerged, they revealed a deep reservoir of religious hunger in China. Temples, churches and mosques soon overflowed with visitors, and pilgrimage sites — including the sacred mountains — became major travel destinations. Mount Putuo, 20 miles off the coast of Shanghai, had 8.5 million visitors last year, up 14 percent over 2016. State-owned Mount Putuo Tourism, which primarily sells ferry tickets, took in more than $126 million in revenue in 2017.

With numbers like that, an IPO was almost a certainty in contemporary China. And until recently it wouldn’t have seemed especially controversial. After all, the government hasn’t been notablyattentive to religious sensitivities in recent years, and the previous two sacred-mountain IPOs — in 1997 and 2015 — went off without a problem. […] [Source]

Covering the quashed IPO for the Financial Times, Don Weinland quotes a statement from the government-sanctioned Buddhist Association of China on the planned listing: “Going public in the name of faith is the sorrow of all society. […] For the social mentality of the Chinese people, this will have a deep impact.”

Tourism companies working near two of the other three sacred Buddhist mountains in China (Emei Shan and Jiuhua Shan) are already listed, and a third company, Wutaishan Cultural Tourism Co. near Mount Wutai in Shanxi, is reportedly also eyeing an IPO. The commercialization and commodification of Buddhism in China is perhaps best represented by Shaolin Monastery and its “CEO monk” Abbot Shi Yongxin. In 2015, China’s Religious Affairs Bureau announced an investigation into Shi for fraud and sexual misconduct. Shi, whose name was cleared last year, has continued to develop the Shaolin brand. Following the development of a Shaolin-themed line of clothing and video games, Shi is reportedly planning to open a Shaolin temple/resort in New South Wales, Australia.

The Economist reports further on fury from monastics over the planned Putuoshan IPO, and on how changing state views of Buddhism may have helped to nix the planned listing:

Monks are rattled. The one manning Guanyin’s donation box fears such undisguised moneymaking would turn their shrine into “another Shaolin”. That temple, in Henan province, is run by an abbot known as “the CEO monk”. He has leased out the Shaolin kung fu brand to computer-game developers and other temples, and wants to build a $297m hotel-and-temple complex in Australia, with a golf course and a martial-arts academy.

[…T]ourism firms are up against changing official doctrines. Ian Johnson, who wrote a recent book about China’s spiritual revival, says that state-owned enterprises that have built profitable monopolies from shrines could increasingly find parts of their businesses unwound. The central government under Xi Jinping wants to promote faiths that it views as indigenous, including Buddhism and Taoism, and to tamp down on those seen as foreign and money-grubbing. The monks also worry that touts and mass tourism will turn their biggest, most pious donors away. In that sense, a shared conviction. [Source]

With the central government and Buddhist activists apparently on the same page in their opposition to the continued commercial co-option of Buddhism, a Xi Jinping-led campaign for Party co-option of the faith appears to be well underway. CDT Chinese editors last month posted a photo collection of banners and promotional material at Buddhist temples which utilize Party language and insignia. CDT’s Samuel Wade translates the text below:

“Continuously deepen study of the spirit of the 19th Party Congress; Together strive to build a beautiful and harmonious temple” 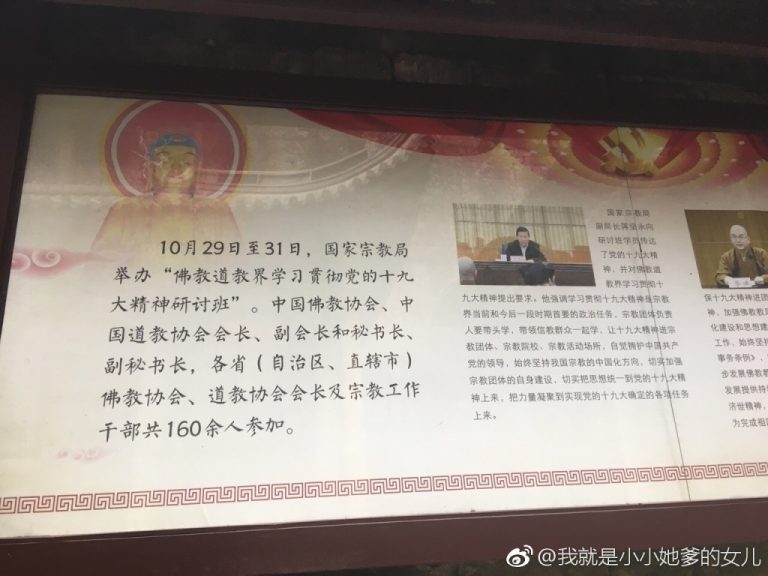 A sign at a temple in Wuxi lists “Socialist Core Values”

The next two images include praise of Chinese Socialism along with references to “Humanistic Buddhism,” a 20th Century “modernization” of Chinese Buddhism which condemns superstition. At The New York Times last year, Ian Johnson described Humanistic Buddhism as “a movement that aimed to save China through spiritual renewal. It argued that religion should be focused on this world, instead of the afterworld. It also encouraged clergy to take up the concerns of the living, and urged adherents to help change society through fairness and compassion.” Johnson quotes an adherent saying, “we Buddhists uphold whoever is in charge. Buddhists don’t get involved in politics.” 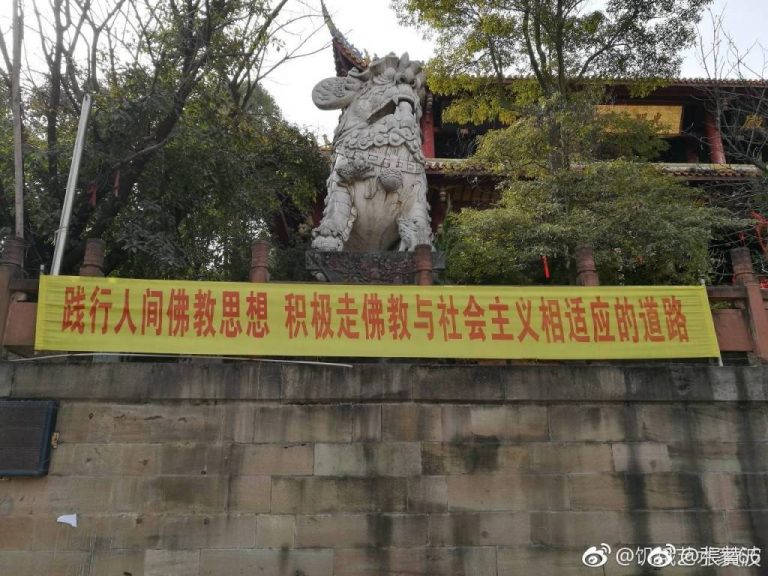 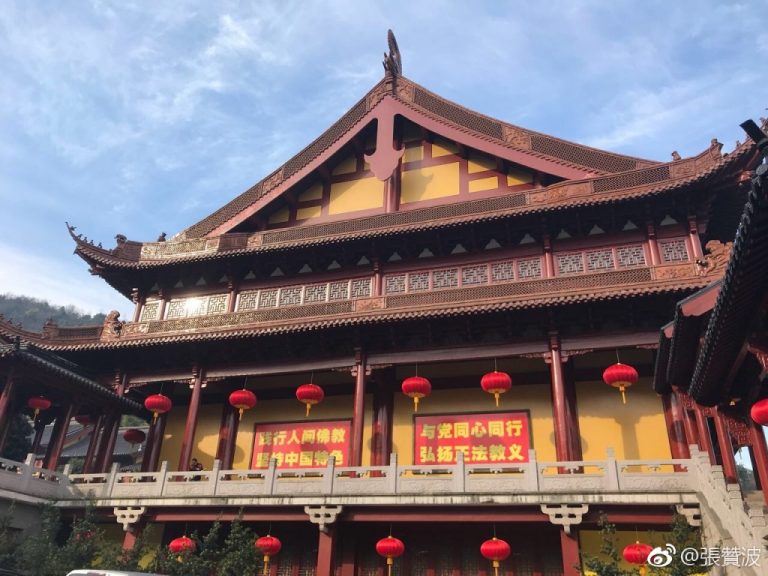 “Implement Humanistic Buddhism Adhering to Chinese characteristics; Of one mind and one action with the Party, Carry forward the teachings of the Dharma”

These last two banners include a phrase used by Xi in official addresses, which appears to originate from the Flower Garland Sutra: 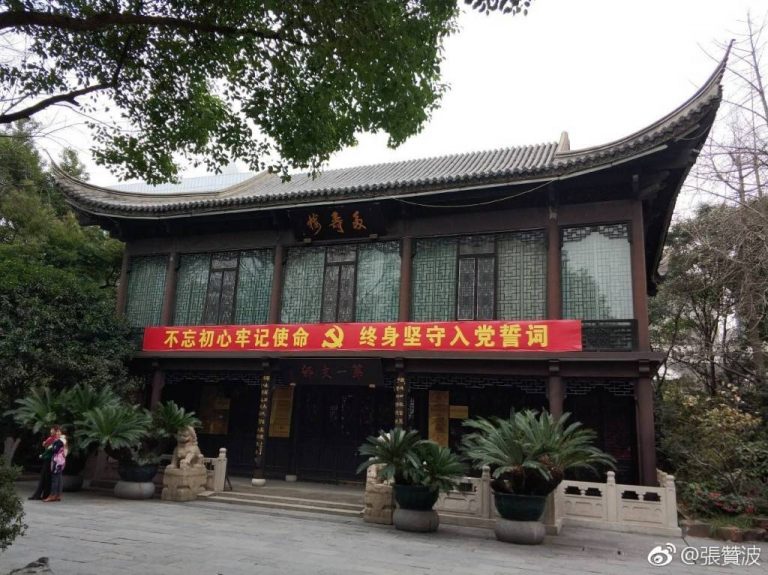 “Do not forget your original intention, keep in mind the historical mission ☭ All one’s life, hold fast to the Party’s membership oath” 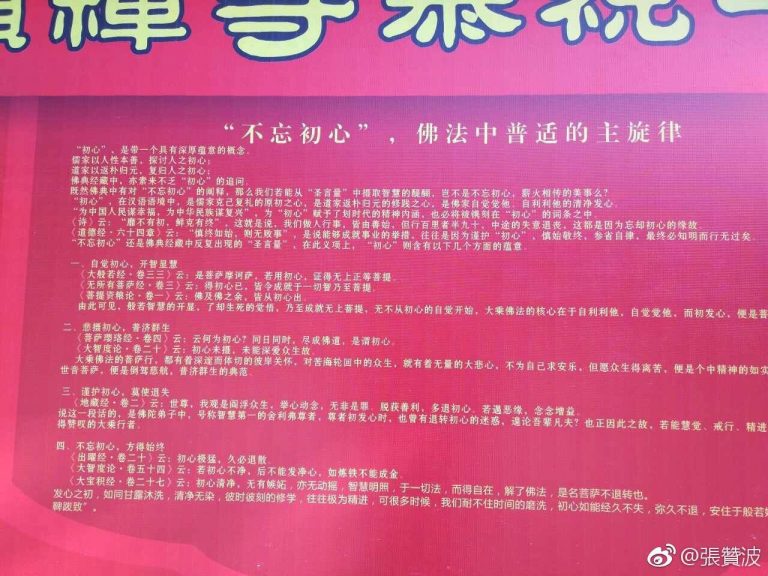 Other similar cases showing a marriage of Buddhist theology and Party doctrine have previously been noted on Twitter:

“Without the CCP, there would be no Tathāgata” [a common Pali and Sanskrit name used by Gautama Buddha for self-reference in scripture, meaning “Thus Come One”]

In Tibet, authorities have also attempted to enroll the local interpretation of Buddhism in their quest to “maintain stability.” Since 2014, the 14th Dalai Lama has repeatedly suggested he could be the last reincarnation of the traditionally political role, which Beijing has answered with castigation and insistence of China’s right to name his successor. Meanwhile, China’s controversial choice of the 11th Panchen Lama last year told monks that patriotism was the “historic mission” of religion, as he castigated the commercialization of Buddhism.

While warning of  the risk of foreign infiltration via non-“indigenous” religions, authorities have announced plans to Sinicize other religions, including Christianity and Islam.