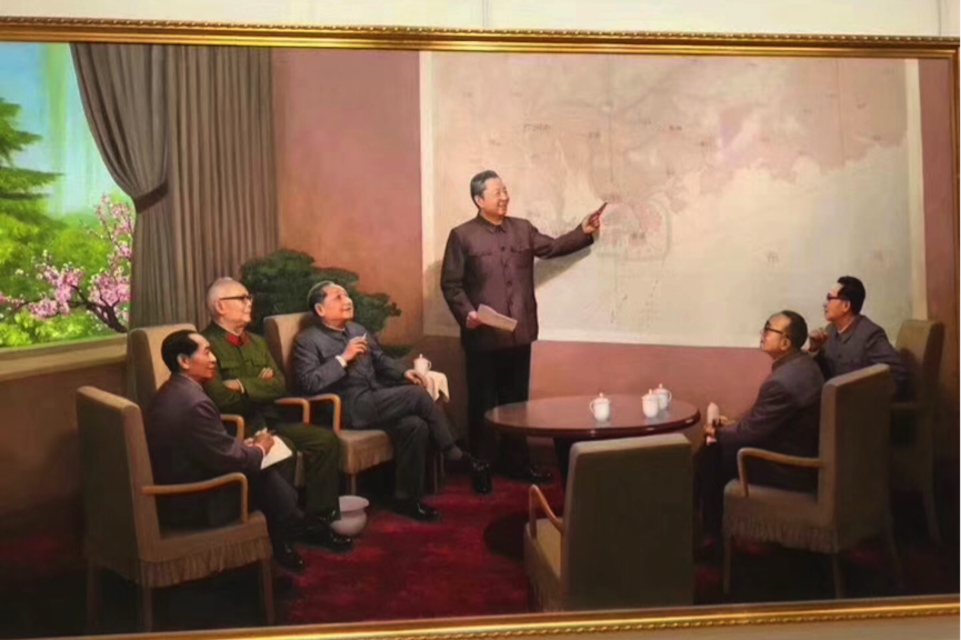 At The Wall Street Journal this week, Chun Han Wong describes a museum "upgrade" in Shenzhen which elevated top leader Xi Jinping in celebrations of the 40th anniversary of landmark economic reforms:

When a museum paying tribute to China’s economic reforms opened here in December, visitors were welcomed by a panoramic sculpture depicting a local visit by Deng Xiaoping, hailed in Communist Party history for launching the country’s rise to prosperity.

Then in early June, the museum was closed for what it called “upgrading.” When it reopened in August, the sculpture was gone, replaced by video screens showing local development and a beige wall adorned with a quote from President Xi Jinping.

China’s Communist Party is celebrating the 40th anniversary of policy overhauls, widely credited to Deng, that transformed an impoverished country into the world’s second-largest economy. Yet much of the state-backed fanfare has focused instead on Mr. Xi, playing up his economic credentials while diluting Deng’s prominence in party lore.

“This is mythmaking in action,” said Julian Gewirtz, a historian at Harvard University who has studied Chinese economic reforms. In shaping narratives about China’s future, Mr. Xi is “claiming greater authorship over China’s past.”

[…] Deng has been a towering figure in China, even after his death in 1997. He is revered for guiding the country’s economic transformation and its transition from Mao’s one-man rule—with its lurches into radical politics—to an era of collective, stable and relatively predictable leadership. His policies set clearer divisions of duties between the party and government and allowed the party’s dominance to slip. De-emphasizing Deng’s role helps Mr. Xi unravel some of those policies. [Source]

The renovation continues a long-running campaign to boost Xi’s personal image, including mythologisation of his time as a sent-down youth during the Cultural Revolution. The government jealously guards its monopoly on historical authority. Besides their notorious avoidance of a reckoning over the events of June 1989, authorities have waged war on "historical nihilism," meaning accounts that challenge Party-approved orthodoxy. This has involved legislative protections for the reputations of revolutionary heroes and martyrs, and prosecutions of those who question or mock them; the takeover of liberal historical journal Yanhuang Chunqiu; pressure on the Cambridge University Press to block access to journal articles by users in China; and the jailing of distributors of books including "How The Red Sun Rose," an unflattering description of the Communist Party before its rise to power.

Wong commented further on his visit to the museum on Twitter:

When the Shekou Museum of Reform and Opening first opened in December, visitors were greeted by this sculpture depicting a 1984 visit to Shenzhen's Shekou district by Deng Xiaoping and other senior leaders. 1/ pic.twitter.com/8h1neZixV5

I showed up on the morning of Aug. 10 not knowing what to expect. I only had a hunch that any refurbishment to this museum, undertaken just months after its grand opening, was likely to result in changes reflective of political currents in Xi Jinping's China. 8/

The first impression was decidedly striking, a Party flag motif on the building's exterior, adorned with the words, "China's Reform and Opening-Up." Large yellow numbers marking the decades from 1978 to 2018. 9/ pic.twitter.com/bAH4CofiIu

The moment of truth. As I entered the museum, where I expected to see the sculpture featuring Deng, I saw video screens flanking a beige wall adorned with text. A quotation, in Chinese and English, from a speech Xi Jinping gave in February. 10/ https://t.co/19xaziqqjl pic.twitter.com/JUATF78NEn

To belabour the point somewhat, here's a photo comparison of what the museum lobby looked like before and after the June-August "upgrading." 11/ pic.twitter.com/f7ZJUUFNpD

As mentioned earlier, most Deng-related exhibits were retained in the post-redesign museum. Including this chair that Deng once used during his 1984 visit to Shekou and samples of his calligraphy. Deng wasn't written out of history here, but he now shares the stage with Xis. 20/ pic.twitter.com/8m1XdL42Tx

Gewirtz, the Harvard historian quoted in Wong’s piece, highlighted the balance of prominence in the commemorations early last month:

One big thing I'm watching this summer is how the Chinese leadership rolls out the important 40th anniversary of "reform & opening.” This is living, contested history, and the question is exactly how Xi Jinping & his lieutenants will *use* this history today. (thread)

No single item will tell the story. But it’s startling that Deng Xiaoping is nowhere to be found in this official feature on 14 “Key moments in China's reform and opening-up.” Multiple mentions of Xi, even a photo of Christine Lagarde, but…no Deng!https://t.co/vY0QFGVtJp

One propaganda item certainly doesn’t establish that there will be any broader (& stunning) effort to downplay Deng. But we can safely predict that Xi will dominate the official anniversary—& the goal will not be to celebrate an accurate reconstruction of the past, but…

…to interpret the past in the ways that are most useful for Xi & in alignment with his "New Era."

So for better or worse, historians will have the pleasure—& responsibility—of noting the inaccuracies & the interesting reinterpretations.

AFP’s Benjamin Carlson offered more evidence of Deng’s de-emphasis and the elevation of Xi Jinping and his father, Communist revolutionary Xi Zhongxun, from a Beijing museum visit earlier this month:

I went to China's national museum of art today & saw something interesting. At the exhibit for the 40th anniversary of reform & opening, Deng Xiaoping was hardly to be seen. Xi Jinping — and his father — stole the show. (1/ ) pic.twitter.com/qNi51R8SPN

Front and center, in by far the largest of the paintings, stood Xi. An 18-foot triptych painted this year. Far in the hazy background — a faint statue of Deng. (2/) pic.twitter.com/TdR5llQBbo

Xi's dad also got top billing, in the 2nd-biggest painting of leaders in the exhibit. He's shown instructing a seated & rapt Deng on where to set reform in motion. Title: "Early spring." (3/) pic.twitter.com/bGUvurh6Dc

A young man saw me staring & asked if I was a journalist. He smiled & admitted that this version of history seemed different from the one he'd learned. (4/)

Compare this to the 30th anniversary exhibit in 2008. Deng was everywhere. He had at least three large solo paintings. Calm seas behind him. (9/) pic.twitter.com/AFQdEXGK2H

The Communist Party is fond of rewriting history for political purposes — not least about Deng — but it's unsettling to see it happen again before our eyes. (10/)

Brings to mind a passage from Simon Leys on the party's propensity to change the past. "There is nothing furtive or clandestine about history rewriting; it is done in broad daylight, & sometimes, at its most humble level, the public itself is invited to collaborate." (11/) pic.twitter.com/wTtJ9HPvvE

At China Media Project last week, David Bandurski wrote that the painting in Carlson’s third tweet had attracted wider notice, and offered a comparative illustration of the “notable increase in attention paid to Xi Zhongxun in the official People’s Daily” since the younger Xi came to power.

Some scholars have grumbled against the painting on the grounds of opposing “historical nihilism,” saying it entirely expunges Chairman Hua Guofeng. Even more people have observed, however, that in the painting it doesn’t seem as though Xi Zhongxun is giving a report, or huibao (汇报), on the special economic zone, but rather is lecturing Deng Xiaoping. This reading, of course, goes very much against the grain of the typical Chinese Communist Party narrative about the establishment of the Shenzhen Special Economic Zone, which is that this idea was first raised by Deng Xiaoping.

The situation has reversed in the Xi Jinping era. In the five years from 2013 to 2017, “Xi Zhongxun” has appeared 98 times in the People’s Daily, 2.3 times more than the 42 appearances for “Hu Yaobang.” We should also note that in the past year — the last half of 2017 and the first half of 2018 — “Hu Yaobang” has not appeared at all, even as the 40th anniversary of Reform and Opening is upon us.

[…] The gap opened starting in early 2016, and it was gaping by the end of that year, as Xi Jinping was anointed as the “core leader.” We see the gap depicted very clearly in “Early Spring,” the oil painting on display at the National Art Museum, and its reinvention of history tells us a great deal about the current environment surrounding the commemoration of 40 years of reform. The “Early Spring” belongs to the New Era of Xi Jinping. [Source]

Greater emphasis on the Xis is not the only trend at work, however, as Gewirtz noted in response to a People’s Daily commentary on August 13:

On front page of today's People's Daily, there's an important new commentary about 40th anniversary of reform & opening under the "Xuanyan" pseudonym (宣言, declaration). Some thoughts below:
<short thread>https://t.co/H8FO4g3eA6

First, this is all about the Chinese Communist Party getting credit for China's transformations. That's the focus—not Xi Jinping (who is mentioned and quoted but not in wildly adulatory terms), and certainly not Deng Xiaoping (who goes unmentioned)https://t.co/75JCJDBTgQ

Second, the lineage of "reform" is direct & uninterrupted—stretching from Xiaogang Village (the fabled model village in Anhui for agricultural reform) through the important special economic zones of Shenzhen, Hainan, & Pudong, to the Xiong'an New Area that is a favored Xi project

Interestingly, reform & opening is forcefully presented as a civilizational "inheritance"—exemplifying & drawing on the "spirit of innovation" that the article says runs in "the blood of the Chinese nation"

Finally, expect to see much more of this global claim, which has become central to the anniversary propaganda:

Yes, I found the 宣言 really striking– as someone working on the Cultural Revolution, it really gave me a start! But what strikes me is not the proto-fascist discourse–civilizational "inheritance" that "runs in "the blood of the Chinese nation"– but the relative absence of Xi

which of course Julian also rightly points out. I read the 宣言 as an attempt to take a step away from the Xi Jinping/Xi Zhongxun centred narrative we've been inundated with, and to play up the more collectivist project of reform (for a change).

The question is, why this, why now? I think in the wake of 人民日报's publication of the 三评浮夸自大文风, the SCIO reshuffle, rumours of an elite split during Beidaihe, & mounting academic criticism, this is an attempt to create some distance between Xi & negative fallout..

from the Made in China 2025 campaign and ensuing trade war. City U of HK's Joseph Cheng said in an AP story I tweeted this morning: "Having concentrated power, Xi is responsible for all policy setbacks and policy failures."

As Spiderman says: "With great power comes great responsibility"; but, also, as they say in Pottery Barn: "You break it, you buy it." And methinks Xi's not going to foot the entire bill for what is poised to become a right mess.