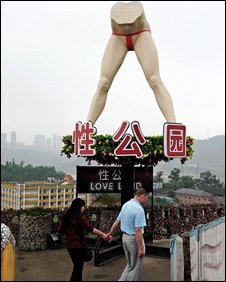 Bruce Humes writes in his blog:

Don’t let media in the West fool you—talking about sex in China is not taboo. But apparently references to female genitalia and orgasms are still big no-nos.

To see how such touchy subjects are handled in Chinese media, let’s take a look at what happened to the Guardian’s “China to Open First Sex Theme Park” (May 15, 2009) when it was translated and published in Cankao Xiaoxi.

As noted in my earlier updates on Cankao Xiaoxi, this daily newspaper is a respected Chinese-language digest of the world press with a long history, and in many cities across China it sells out every day before noon. Virtually no English is used and no content is added. But references deemed unbecoming to China’s image are often deleted.

To show you how censorship/repackaging works in the People’s Republic, the Guardian’s original news item is fully reproduced below. Note that both uses of “genitalia” in the original, which are gender-neutral, have for some reason been rendered in Chinese as “phallus” (男根).

Read more of Bruce’s post here. Thanks to Ingrid Fischer-Schreiber for the link.

See also a report from Reuters about the tearing down of the sex theme park before it opened:

A picture of the park entrance showed a signboard with the park’s name straddled by a giant pair of women’s legs topped by a red thong.

But the plans left Chongqing officials red-faced. They ordered the park torn down over the weekend, the China Daily reported.

Drawing the News: Sweeping Yellow Under the Rug