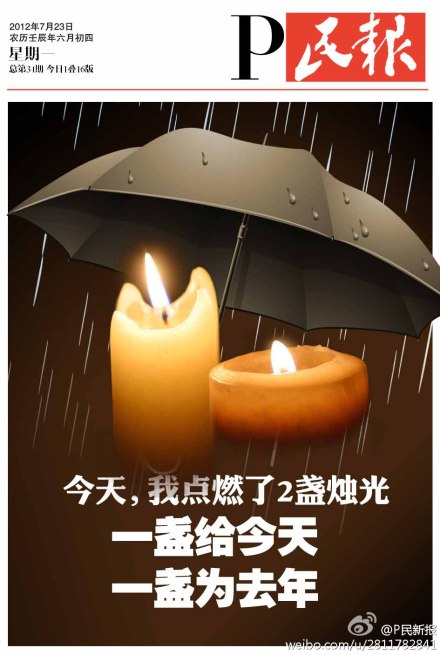 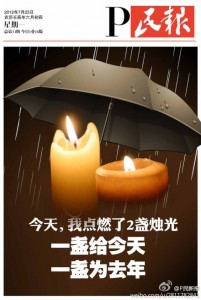 “Today, I light two candles: one for today, one for last year.”

Yesterday marked two tragedies in China: the third day of floods in the nation’s capital and the one-year anniversary of the high-speed train crash in Wenzhou. Both appeared at first to be natural disasters, but are really man-made. In Wenzhou, railway officials first blamed a lightning strike for stopping one train over a bridge—another train crashed into it shortly after, killing 40 passengers and injuring at least 210. Five days later, researchers announced that faulty signalling was to blame. In Beijing this weekend, heavy rainfall overwhelmed the outdated system of water pipes. Poorer districts on the city’s periphery are still in dire condition, and many fear the death toll is much higher than the official 37.

The Rabble News, an online parody paper, posted this “front page” on Weibo July 23. Two mourning candles huddle together under an umbrella. “Today, I light two candles,”  reads the headline, “One for today, one for last year.” Connecting the two events, especially by lighting commemorative cyber candles, is a provocative move in China’s tightly controlled media space. Despite admitting to error and firing Railway Ministry officials, authorities have still barred reporters from visiting the site of the Wenzhou crash, and independent reporting on the anniversary was forbidden. Even journalists working for state-run media were chastised for criticizing the response to the disaster. Citizens are braced for cosmetic responses to the floods. Braced, but not complacent.

People may expect lethal mistakes to be swept under the rug, but they are increasingly holding the government accountable. Weibo is the prime site of public anger at dismal infrastructure. People want to know how a city that hosted the world’s most extravagant summer Olympics to date could neglect such basic city services, and how the efforts of individual Samaritans, while noble, could have no state parallel. Yao Bo, a well-known commentator, sighed on July 22, “The only thing that functioned properly last night were the people of Beijing.”

This is the crux of China’s dilemma: under Deng Xiaoping, the Party made a pact with its people to provide prosperity and a better quality of life in exchange for perpetuating the authoritarian regime. Now the Party is failing in its end of the bargain.